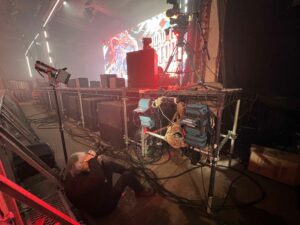 Wanting to increase the dynamism of its Qatar World Football Tournament coverage, Fox Sports turned to UK video services company Debrouillard Television to capture the fan experience during key matches during the tournament. This included the England vs. USA match on November 25th. The broadcaster, a long-time LiveU user, specified that it was the company’s technology that had to be used.

Jonathan Young, Owner of Debrouillard and also an established LiveU user, said, “Fox Sports is one of the host broadcasters for this tournament. There are fan parks around the world for fans to gather and watch the matches on big screens since they can’t physically be at the game. This has become very popular with fans, as well as with broadcasters who can capture the live supporter reaction footage gathered at these events. The example that really fired imaginations was the fan park event during the European Championship football Tournament with England fans in Hyde Park, London. It had been done in the past and continues to be a benchmark for excitement.”

Young was contracted to find a suitable venue in the UK. This was a challenge because as the event is being held in UK winter, outside venues weren’t possible. The company chose Road to Victory (RTV), a fan park set up for the tournament on the edge of Manchester. They guaranteed high ticket sales, as well as dynamic lighting and multiple big screens with special animation, too.
The first fan experience covered was for the England vs. USA Group Stage, Group B game, which fell on Black Friday and Thanksgiving weekend in the US. Fox Sports anticipated this being the most watched soccer game in US history. Fan reactions during later matches as the tournament progressed were also covered in the same way.

Young adds, “We spent a lot of time checking out the venue, not least the connectivity. We also tested during a previous match there and LiveU absolutely worked. Because it’s almost subterranean – it’s built into disused railway arches – we had to ensure connectivity as this was a high-profile event for Fox Sports. What RTV had done with the venue really added to the atmosphere.”

Debrouillard owns multiple LiveU units and a LiveU server. Young explains that with 6,000 fans there, many using mobiles for their own footage, and the concrete, steel and brick nature of the building, the company worked with LiveU UK to use a 5G enabled LU800 to guarantee maximum bandwidth. The LU800 was configured with a mix of 5G and 4G SIMS in addition to an Ethernet connection. A second LiveU unit was used for redundancy. The feed was sent to Fox Sports so they could use it as they wished.

Young concluded, “5G was a real advantage for us, not only for the inherent bandwidth and the LU800’s capabilities, but because so few consumers use it at the moment and in such a tricky environment, this gave us even more bandwidth and resilience. Fox Sports is very happy with the results we achieved, both in terms of the technical excellence and the vibrancy and sense of occasion the footage added.”

Malcolm Harland, LiveU’s UK Country Manager, said, “This is a great example of LiveU’s technology helping drive viewer engagement, adding a real flavour of fan excitement. Well done to Fox Sports for recognising this and forging their own path to get what they wanted, rather than relying on feeds from others where they have no control. This added a really competitive edge to their coverage.”