#GalsNGear: Women on the Cutting Edge of Production Tech

Launching this year at NAB Show, the #GalsNGear pop-up event, created by Women in Film and Video (WIFV-DC) in partnership with NAB Show and livestreaming partner Broadcast Beat, tackles gender balance in production and post by putting successful women in tech front and center at a livestreamed demo event and other feature segments throughout the conference that is sure to capture attention at the industry’s premiere event. For details follow #GalsNGear on Twitter and www.wifv.org/programs/galsngear/

Even before the #oscarsowhite controversy, Hollywood has been focused on diversity in filmmaking. The New York Times Kevin Lee did a breathtaking assessment in which he noted that women occupy significantly less screen time than their male counterparts.   And plenty of actresses from Julia Louis-Dreyfus, Geena Davis and Meryl Streep have been at the forefront of efforts to increase the quantity and quality of roles for women in front of the camera.

With #GalsNGear at NAB Show, we’re taking another approach to the problem. The goal is to focus on women in technical positions in production—DP’s, gaffers, sound designers, finishing suite artists—and make these positions more visible to increase opportunities for women across all fields of media-making. It’s been my experience that when your crew and post team is a more gender-balanced, it’s harder to deny women at the helm.

So where do women stand today, in filmmaking and television? First, the bad news. According to studies at The Center for the Study of Women in Television and Film at San Diego State University, 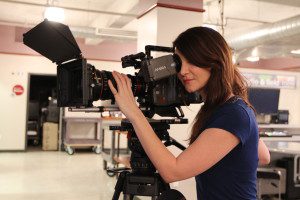 women only occupy 17% of behind the scenes roles in Hollywood films. It gets a little better in primetime television and independent features, with the numbers at 25% and 26% respectively. But in the technical fields, the numbers drop precipitously. In 2015, women accounted for just 6% of all cinematographers working on the top 250 films of 2015. Women comprised 5% of sound designers and 1% of key grips.  It gets better on the independent documentary side. Each year for the last 13 years, 25% of American directors at the Sundance Film Festival have been female.  Other studies reveal that when women have more jobs behind the camera, the depiction in front of the camera is also more diverse (Lauzen, Celluloid Ceiling studies).

But here’s the good news: new, lighter weight, more flexible camera equipment has made the camera department more available to women. And a generation of digital natives—both men and women–is embracing editing and post-production fields. Add to this a generation of YouTubers who have been sharing digital stories since birth, and you have a potent mix to create gender balance opportunities in media production. Katie Hinsen, Senior Finishing Artist at Light Iron who will be featured at the event, reflects on her path to a career in high-end post-production: “I started out working the night shift at the local TV station, and then I went to broadcasting school. Some people come in to post production right out of film schools.” Hinsen is part of the Blue Collar Post Collective, which like #GalsNGear was created “to open more dialogue about how to help more people build their careers, because it’s not the same for everyone.”

One of the challenges of our industry is the “BRO” culture. According to Workflow Supervisor Kylee Wall Pena, who spoke at NAB Show’s GenderGap panel last year “In post-production there is generally less of an outright BRO culture. It’s more an institutional sexism and gender bias that is pervasive in post.” WIFV Executive Director Melissa Houghton agrees. “With #GalsNGear we hope to foster an environment that champions women’s technical abilities in filmmaking, and makes it harder for people who don’t even realize they are being biased when considering women for jobs in production and post.” 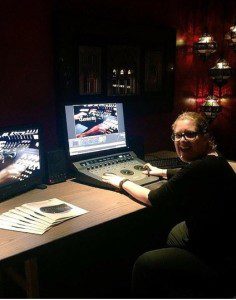 #GalsNGear Live! will take place on Tuesday, April 19 at the NAB Show Studio 1, Central Lobby 9:00-10:00 AM, with coffee and networking sponsored by Media Central and BlackMagic Design at 8:30 AM.  With demos in everything from the latest cameras to sound mixing, virtual reality and drones, participating vendors and partners include iZotope, Ott House Audio, Black Magic, AbelCine, Zacuto, SAM, Killer Tracks and Vimeo.  Other events promoting women and diversity at NAB Show include: the Women’s Room at NAB Show power breakfast hosted by the Alliance for Women in Media on Monday April 18, and the Post|Production World panel I’ll be hosting later that afternoon on “Creating Inclusive Work Environments,” plus the new Multicultural TV & Video Conference on Wednesday, April 20. Go to www.nabshow.com for details.

“It’s time to change the conversation in media,” says WIFV president Rebecca Bustamente. “#GalsNGear lets us focus on women who are immersed in the technical aspects of filmmaking and through our partnership with NAB Show, they also get the most current, cutting edge technology in their hands – literally.  It’s both empowering and practical.”

Amy DeLouise is a director/producer/speaker. Her new book The Producer’s Playbook: Real People on Camera (Focal/Routledge) comes out at the NAB Show bookstore, book signing on 4/19 at 3:45PM.