Gareth Johnson Installs PMC6-2 Monitors In His Studio At Metropolis 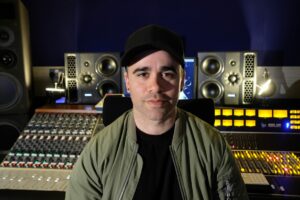 Music producer, composer and multi-instrumentalist Gareth Johnson has long been a fan of PMC’s high quality professional loudspeakers but following the launch of the company’s latest monitor range he is now even more convinced of the benefits of using PMC.

“They are a revelation,” he says of the PMC6-2 speakers he as now installed in his studio at Metropolis in London. “As soon as PMC said they were launching a three-way monitor, I knew I had to have a pair. They are incredibly detailed and the SoundAlign control interface is great. You can hear the entire audio spectrum, even at very low volume levels, and they make working in the studio much easier, quicker, and less tiring.”

Launched under a year ago, PMC’s new line of compact, state-of-the-art near-and midfield monitors are already redefining the listening experience for audio professionals working in stereo and large scale immersive formats. The monitors are the result of five years of intense development and are the perfect complement to PMC’s main monitor products such as the legendary QB1, BB6, MB3 and IB2 models, which are found in many of the world’s top audio facilities.

Gareth Johnson’s new PMC6-2 nearfields supplement his existing pair of IB2 XBD-A main monitors, which he bought some years ago when he first set up his studio at Metropolis.

“As main monitors, the IB2s are incredible and I love them,” he says. “They are also very big and powerful – so big, in fact, that when I told my wife I wanted a pair she said fine, but don’t even think about bringing them home!”

Johnson’s credentials as a composer are second to none. He has written 500+ songs licensed for synch across Film, TV, Sports and Games, and his clients include FIFA, FIA Formula E, BBC, Audio Network, HBO, Sky, Sony, Universal Music, Warner, CNBC, Discovery Networks and many more. He is equally in demand as a producer and remixer and has his own business, Stand Alone Productions, which he set up in 2000. In recent years he has worked with many major artists including The Who, Suede, Noel Gallagher, Primal Scream, Kasabian and Them Crooked Vultures.

These days he often works with his co-writing partner, Martin Kaczmarski, who has also installed PMC6-2 loudspeakers in his room at Metropolis. By having the same monitoring systems, the pair can move projects more easily between their studios because the sound signature doesn’t change.

“I also have a writing room at home in West London and I am currently building a new studio there, which will eventually be my main base,” Johnson says. “PMC will feature in that studio, too, but I haven’t decided which model yet – it will depend on the size of the room and what it needs.”

He adds that the PMC6-2 monitors are getting plenty of attention at Metropolis. “Everyone who comes into my room loves them,” he says. “PMC is an aspirational brand, but you get what you pay for, and they are certainly quality. I think any piece of high end equipment can be justified if it helps you work faster, better and more effectively.”