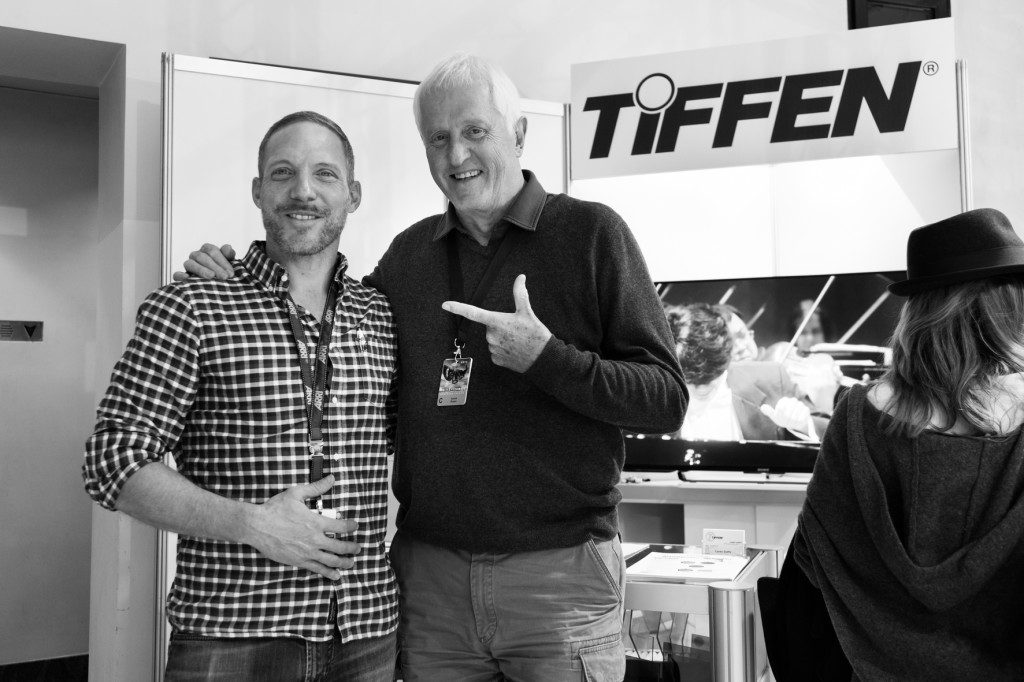 2x 300 dpi images supplied, captions at end of this release – photos must be credited please

Tiffen International, Pinewood Studios, London UK, 30th November 2015:
Garrett Brown, inventor of the Oscar-winning Steadicam® camera stabiliser, packed them in when he gave his Moving Image presentation at the recent Camerimage Festival in Bydgoszcz, Poland. “I was worried about getting an audience since the ‘Muhammad’ screening started halfway through my talk, but it was packed, with traffic-stopping jams around monitors in the corridors and lounges too. Amazing – it went very well” says Garrett.

As well as inventing Steadicam Brown also used it to great effect in close to a hundred movies from 1975 onwards and holds over 50 patents for other camera devices. He is now retired from shooting but continues to invent and is kept busy lecturing and teaching at global Tiffen Steadicam workshops, which he enjoys immensely.

Noted German Steadicam operator Max Zaher, who has been using the new top of the range Steadicam M-1 on a variety of international shoots since receiving the first M-1 on launch last summer, travelled to Camerimage to meet Garrett. “That was an opportunity I could not miss” said Max. “I am making my name now with Steadicam and this was a chance to meet the maker, a long-time ambition for me.”

Max had originally been a focus puller working on many movies with the renowned German camera and Steadicam operator Klemens Becker. Max became very skilled at setting up the rig for Klemens, and when Max actually used the rig in front of him Klemens recognised his talent immediately and began his training.

“Klemens let me use his Steadicam 3a at first, then I started to use rental rigs and got to try almost every existing model. Finally I decided to invest in my own rig. The financial and logistical aspects of renting don’t make sense when you work a lot, not to mention having to adapt to the different models.”

“Shooting has changed and now nobody wants to wait. Setup has to be fast and solid and the M-1 can do this. I can quickly balance and change modes and I love that it’s all tool free, including the G70x arm, and also that it’s designed to be easily updated in the future. It was a big investment but exactly the right choice. It’s easy to maintain static and dynamic balance in either high mode or low mode, and to switch back and forth is a matter of minutes, which frees me to concentrate on the real job of shooting. It buys me a lot of time and concentration for the actual filmmaking – the shot, the drama.”

Garrett Brown is a member of the American Society of Cinematographers, the Directors Guild of America, the Screen Actors Guild and the Academy of Motion Picture Arts and Sciences. As well as creating Steadicam and making a huge contribution to the film industry he has invented and patented many other camera devices including Skycam, Mobycam and Divecam, all created initially for his own use. He lives in Philadelphia, USA and teaches and lectures worldwide.

For his credits and biographical information, details of his unique range of camera equipment, visit www.garrettcam.com

Tiffen has been a leading manufacturer of photographic filters, lens accessories, software, and camera accessories for the consumer/professional imaging and the motion picture and broadcast television industries for over 75 years. Tiffen has been recognized for its product and engineering excellence, earning a Technical Achievement Award and a Scientific and Engineering Award from the Academy of Motion Picture Arts & Sciences, as well as multiple Emmy Awards.

Tiffen is a registered trademark of The Tiffen Company. All other trademarks and products mentioned herein belong to their respective owners

2) Max Zaher on location in Rome, Italy, with his Steadicam M-1 rig during shooting of “Hooten & the Lady”- photo by Rafael Jeneral (photo must be credited please!)