Gary Trenda is one of the world’s top frequency coordinators of wireless microphones. He has coordinated wireless systems on six Super Bowls; Cirque du Soleil; dozens of awards shows and music acts including Fleetwood Mac, Metallica, Toby Keith and The Dixie Chicks.

After working for 20 years as a Wireless Audio Technician for companies like Orlando-based Professional Wireless Systems (PWS), he moved in 2021 to Sound Devices, where he works as an RF Applications Engineer, while continuing to do selected major wireless events throughout the year.

Frank Beacham: Super Bowls are among the most complex and high-pressure wireless events in the world. How do you even begin to approach a project so massive?

Gary Trenda: We typically go to the site months before hand and do a site survey to scan the wireless spectrum. We want to see what’s in the air nearby. Then we talk with the folks from the NFL, who are responsible for the overall frequency coordination of the event. We tell them these are the wireless systems we want to bring in for the pre-game, game and half-time shows. We provide the available frequency ranges we can operate those systems in. Then we try to put together a band plan that accommodates what other wireless users need.

Frank Beacham: What happens when the NFL gets more requests for frequency than is available? Does that ever happen?

Gary Trenda: It is my understanding that they just come back and say the particular frequency range being asked for is either occupied with local DTV or other users. If the spectrum they want is not available, then the search begins for alternative spectrum. 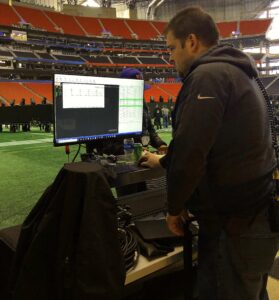 Frank Beacham: You create wireless ‘zones’ for major events. What is a zone?

Gary Trenda: We set up multizone antenna systems for the wireless audio devices we deploy. Typically, digital transmission is at a relatively low power level and to get those systems to work reliably — especially in crowded RF environments — the mic must be close to the antenna. A multizone system is used so a microphone can move throughout a stadium. In a concert, the mic might be moved to the front of house location. These zoned antennas are very helpful.

A lot of times if antennas are separated by great distances, we’ll use something like an RF-over-Fiber system to send the signal once it’s received by the antenna back to the headend location where the actual receivers are located.

Frank Beacham: During the 2018 Super Bowl, Justin Timberlake used a single microphone while performing in multiple locations in the stands and on the field. You used two separate RF carriers simultaneously and placed various antennas around the stadium to pick-up his mic. That sounds incredibly scary. Did it work?

Gary Trenda: Yes, that’s a good example of what we’re talking about with multizone systems. For Justin Timberlake, we had diversity antennas set up wherever he went, whether on the field or in the stands. He was always picked up by the two closest antennas. You never hear a switchover as he moves from one zone to the next. It’s a complicated system, but once it is set-up properly, we’ve had very good results with it. 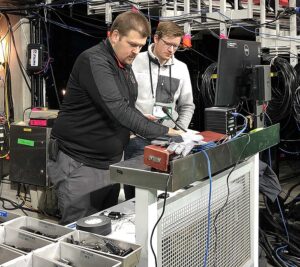 Frank Beacham: We you began coordinating wireless systems in the 2000s, you were using 470 to 806 MHz in the UHF TV ban. But since then we’ve lost spectrum due to the FCC and digital television. Has this been a difficult situation to manage?

Gary Trenda: It has caused people to think about other areas of spectrum to operate in. When I started out, my first big RF job was with Cirque du Soleil at the MGM Grand in Las Vegas. At that point, we had wireless systems that could go from 470 to 806 MHz. Soon after that, they sold off much of the bandwidth. In big cities — say a Super Bowl in Los Angeles — the majority of that spectrum is occupied by broadcast television transmitters. So we’re looking for other places to go with these wireless systems. I think that’s one of our biggest challenges moving forward.

Gary Trenda: It depends on the specific digital systems. Some have settings where you can adjust the bandwidth of the signal or the power levels of the signal to a lot closer spacing. There are some — on the intercom system side — where they’re actually multiplexing users into a single RF channel in an attempt be more spectrally efficient.

There are different things that manufacturers are doing to address the problem. At Sound Devices, we’re addressing that now by introducing products that can tune from 470 to 1525 MHz to try to offer the user anything in that range

Frank Beacham: I understand at the Super Bowl, you’ve used mainly Shure Axient and Sennheiser Digital 6000 systems. What features did those systems do to help you in this situation?

Gary Trenda: Those systems are usually specified by the artist. It’s typical at a Super Bowl halftime show that an artist specifies a particular handheld wireless microphone with a capsule that they want to use. It’s the sound they’re familiar with when touring. Both Shure and Sennheiser have historically been very helpful by giving us access to all the different frequency ranges that they make. 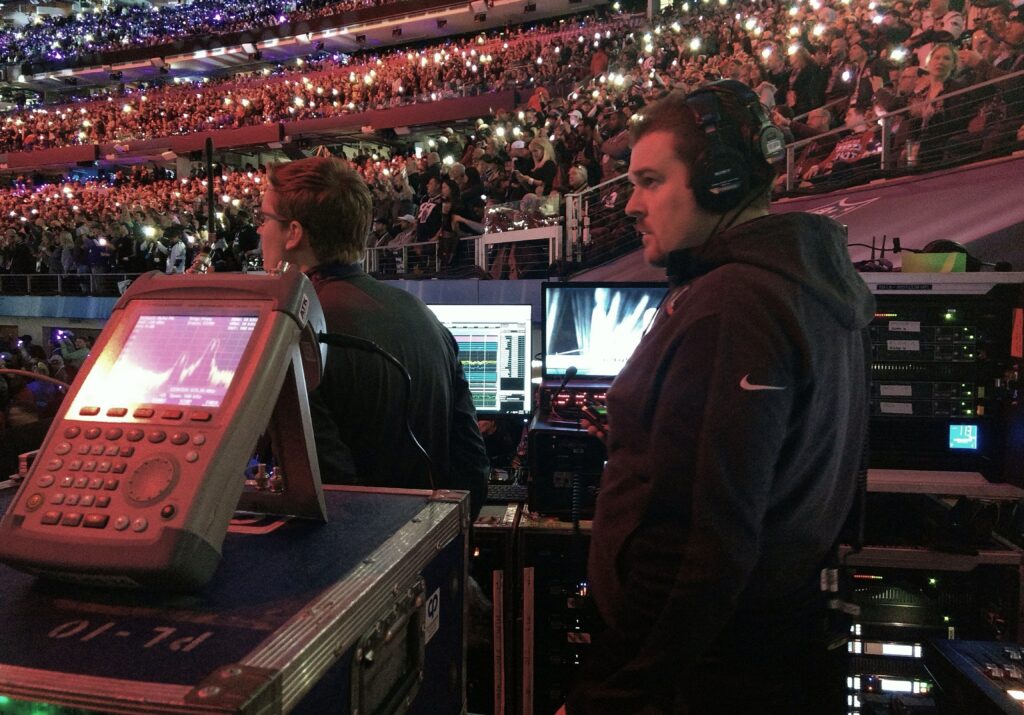 Frank Beacham: A lot of venues now have 2.4 GHz Wi-Fi systems in stadiums for use by the fans. How does that affect what you’re doing?

Gary Trenda: It adds to the RF congestion. Some of these microphones have a data link that operates in 2.4 GHz and we check how our data links fit within that Wi-Fi spectrum. An example would be the bodypack transmitter on a referee at the Super Bowl. We have the ability to remotely control it if we were to experience interference. We can change frequencies or adjust the gain remotely. So that data link is just another system that we’re setting up among all the other Wi-Fi interference.

Frank Beacham: What’s the largest number of wireless devices you have ever used at once?

Frank Beacham: So you’re like an RF traffic cop that makes sure everyone stays in their lane — and doesn’t crash into one another.

Frank Beacham: There’s a whole new generation of very low-cost 2.4 GHz wireless mics. I know that you don’t use them, but do they affect your work?

Gary Trenda: Those 2.4 GHz systems are desirable for some people, because there’s not a lot of frequency coordination involved. It’s a system where you turn it on; it tries to find available spectrum; and it either works or it doesn’t. It’s fine for certain situations. But for the types of professional things that we do where a mission critical wireless system is required, then you want to use spectrum that is less crowded than 2.4 GHz. 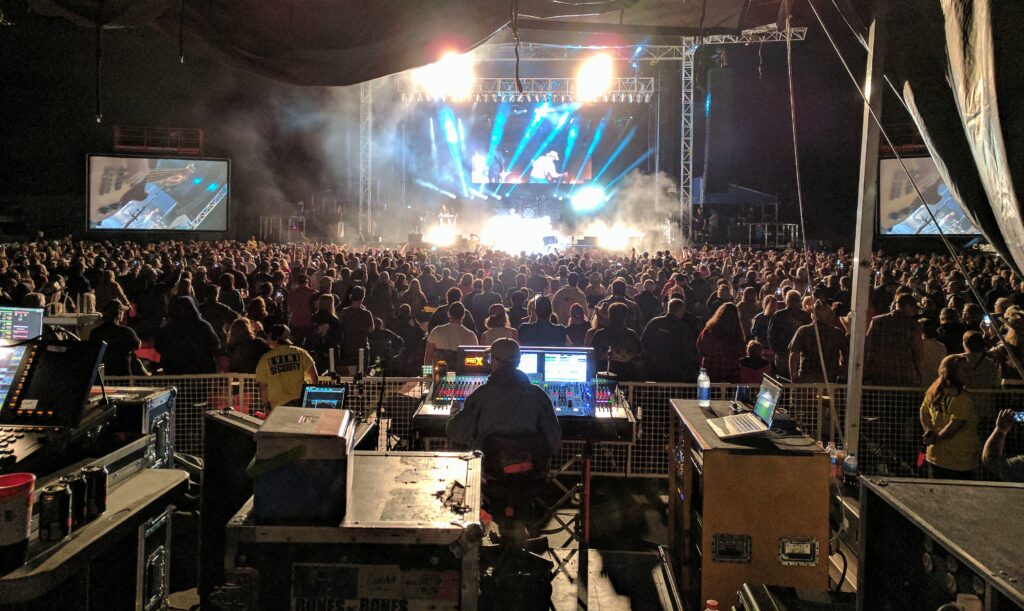 Gary Trenda: In my current job at Sound Devices, as an applications engineer, I do a lot of education and outreach. Sometimes I’m the guy trying to help a user in the field solve a wireless problem. I end up explaining a lot of RF fundamentals to people

For example, to describe RF gain structure, I draw parallels to audio gain. If one takes an audio preamp and turns the volume up, at some point it’s going to overload and distort. The same applies to an amplified antenna. It amplifies everything in the signal, including the noise. So just adding additional gain into an RF system isn’t always a good thing. It’s about finding that right gain structure so that you get good clean signal into your system.

Frank Beacham: What else is going on at Sound Devices

Gary Trenda: Systems that operate over a wide bandwidth is something we’re thinking about a lot these days at Sound Devices. Filtering is important when tuning over very wide ranges. The filtering in newer systems use very steep roll-off filters to narrow the clean frequency spectrum that we’ve identified as the area where we want our wireless systems to operate.

We’re really thinking about filtering as the next step after band planning of what we need to do to make wireless systems operate more reliably. We are doing some tests for improved front-end filtering for new receivers.