Currently screening exclusively in movie theaters, Sony Pictures’ Ghostbusters: Afterlife invites audiences to experience a thrilling new chapter in the Ghostbusters universe. Directed by Jason Reitman and produced by Ivan Reitman, the film centers on a single mom and her two kids who arrive in a small town and discover their connection to the original ghostbusters and the secret legacy their grandfather left behind. The film is written by Gil Kenan and Jason Reitman.

Sound editorial and mixing was based at Sony Pictures Post Production Services where a veteran crew led by Supervising Sound Editor/Re-Recording Mixer Will Files, Supervising Sound Editor Perry Robertson and Re-Recording Mixer Mark Paterson faced the formidable challenge of following in the footsteps of a legend. Released in 1984, the original Ghostbusters is among the most beloved comedies of all time and elements of the film, including many of its signature sounds, are etched in the minds of movie fans around the globe.

“All of us grew up with the original Ghostbusters,” recalls Files. “I probably saw the film 100 times as a kid. Our task was to recreate the iconic sounds of ghosts, proton packs, ghost traps, the PKE meter and the Ecto-1—in fact the whole sonic feel of the original—while modernizing and expanding them to fit Jason Reitman’s vision for this imaginative new film. It was an incredibly fun challenge!” 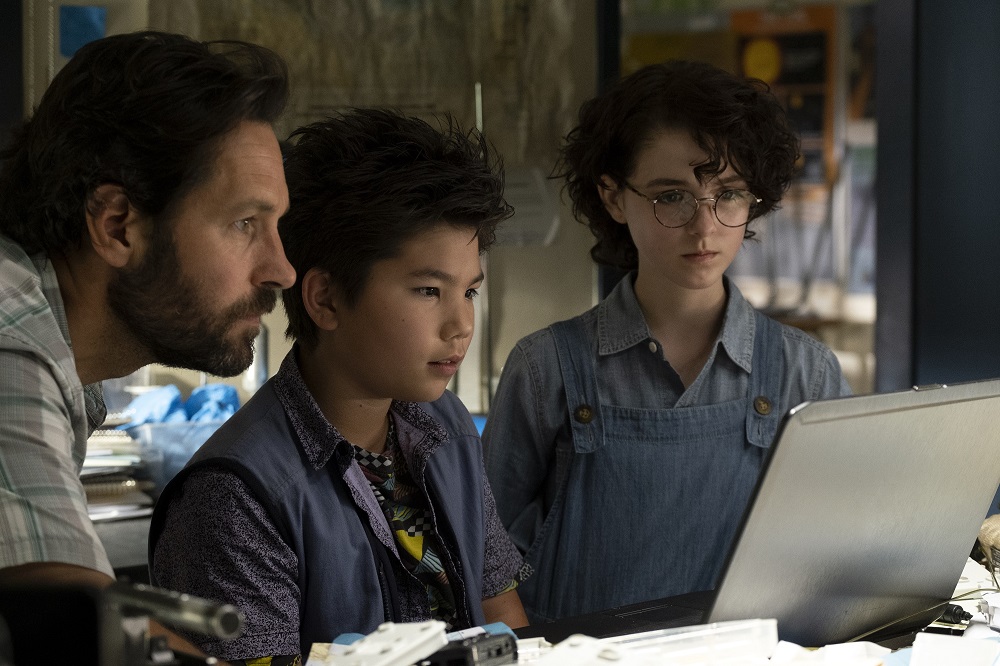 Just as the plot of Ghostbusters: Afterlife centers on a passing of the torch between generations, the sound crew built on the work their predecessors carried out 34 years ago. Sound editors poured through Sony Pictures’ archives and unearthed work-in-progress recordings made by Sound Designer Richard Beggs and other members of the original sound team, including Ghostbusters (1984) Sound Designer and Ghostbusters II Supervising Sound Editor Tom McCarthy, who currently serves as Executive Vice President, Post Production Facilities at Sony Pictures. “We found recordings of sound effects that were used in the first film, as well as alternate versions and recordings that were not used,” Files recalls. “We repurposed many of them while applying modern software and processing techniques. For example, we took the sound of a proton stream and ran it through a Doppler plugin to give it a spinning sound that fit perfectly with a cyclotron device mounted to the back of the pack.”

For sounds representing technology of the 1980s, such as the modified Cadillac ambulance known as the Ecto-1 (which, in the film, is discovered in storage), the team employed a combination of archival recordings and old electronics. “We used vintage synthesizers and various older machinery,” explains Files. “For one memorable scene featuring a huge dynamo, we used a recording of a 100-year-old welding turbine, recorded at a train museum in Michigan. It felt just right.” 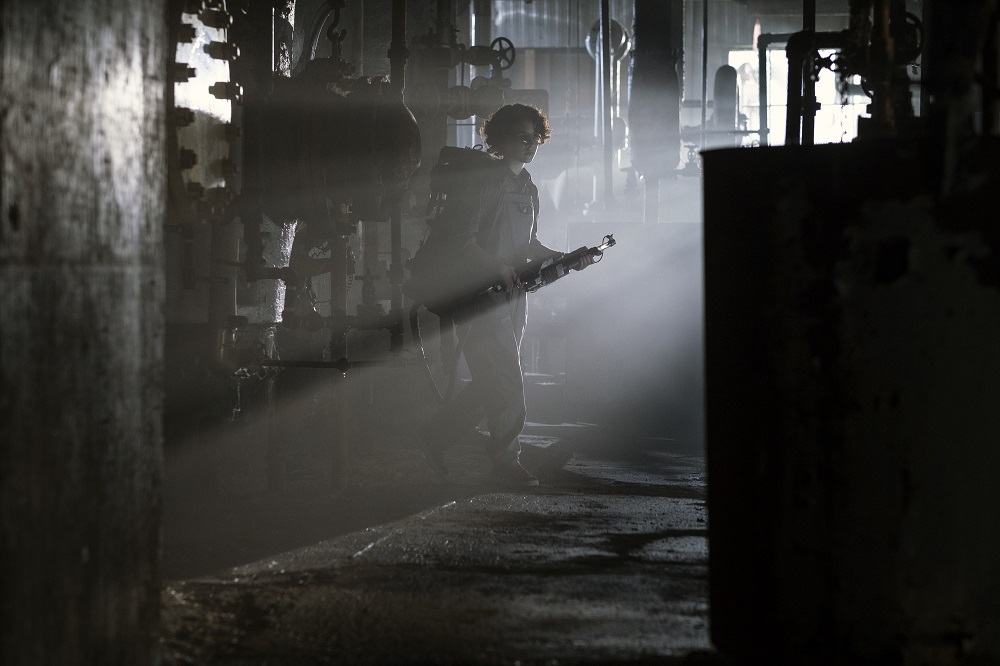 “The sound effects are definitely modern,” adds Robertson. “They’re big and beefy, yet you hear the original elements, and they take you back. Pulling off that balancing act was fun.”

While many aspects of the soundtrack have their roots in the original film, Ghostbusters: Afterlife has its own sonic character. Robertson, who previously supervised sound for Jason Reitman’s films Up in the Air, Labor Day and Juno, points out that the new film is, at heart, a family tale that’s revealed through character and dialogue. “Jason’s films are all about story,” he explains. “This film has big action scenes, as you would expect, but it also reflects Jason’s sensibilities. Dialogue is crucial. If an actor speaks a line, Jason wants you to hear it. There are no throwaway lines.”

“Jason knew the soundtrack from the 1984 film intimately and wanted to recreate its magic,” Paterson recalls. “It had a very distinctive sound that was in part a result of the microphones they used to record sound and dialogue, and the style the original mixers brought to the mix. We spent a lot of time listening to the original soundtrack so that we could get that same vibe.” 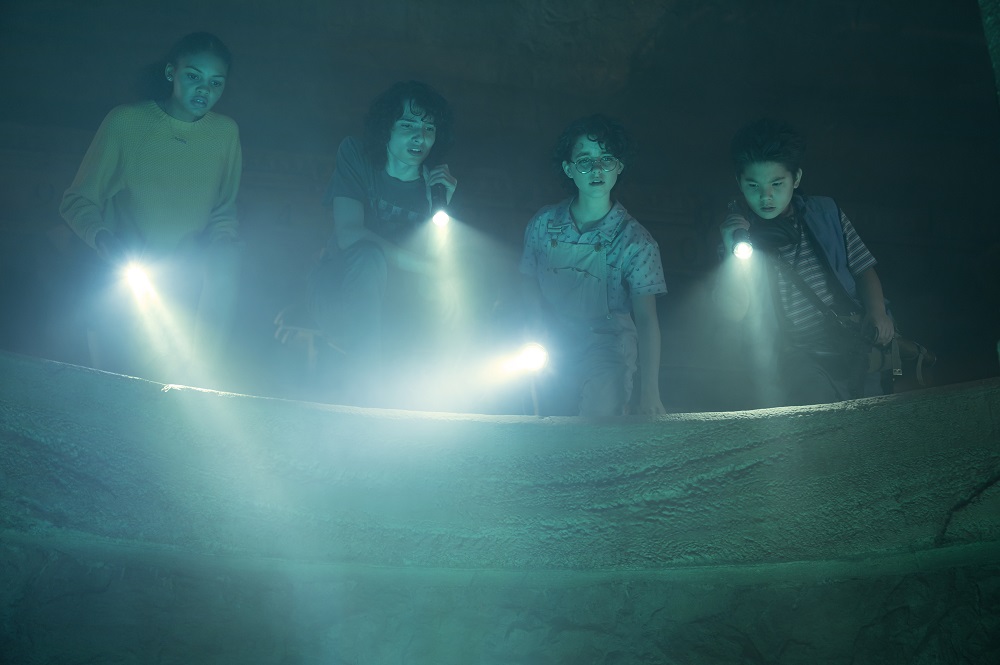 Files adds that Reitman wanted in particular to recapture the “analog” sound of movies from the 1980s. “Jason was interested in bringing as much analog character to the mix as possible,” he notes. “Mark and I experimented with adding analog-emulated saturation to the mix, like you’d get from tubes and tape. Virtually every part of the soundtrack went through a few layers of analog emulation. We went so far as to sample the noise floor from the original film, and we added that as soon as the movie starts. If you listen closely, you can hear a soft analog hiss when the Sony logo appears.”

“It was the opposite of what we do on most films,” adds Paterson. “The sound is more stylized than most movies I’ve worked on and that came from Jason and the aesthetic he wanted. When all was said and done and we played back the whole movie, I sat there thinking about how far he pushed us. It was impressive.”

Due to ongoing pandemic, a portion of the sound work had to be conducted remotely. Although confined to their individual home studios, Files, Robertson, Paterson and their crew were able to carry on their work as normal thanks to Sony’s new 360 VME technology. The software simulates physical spaces and speaker locations so that people in different locations, listening via 360 VME headphones, hear the same spatial sound.

“We were testing the headphones when the pandemic hit and they couldn’t have come along at a better time,” recalls Files. “They allowed us to take the studio home with us. They got us through the first months of the film.”

In the end, for the sound team, Ghostbusters: Afterlife was a labor of love. Robertson says the whole team was energized by the opportunity to build on the DNA of the original classic while exploring a new story with plenty of heart. “If you’re a diehard Ghostbusters fan, you’ll love it,” he says. “If you’re a newbie, you’ll love it too…it will make you want to watch the first film to get caught up on the story. It’s a special film.”