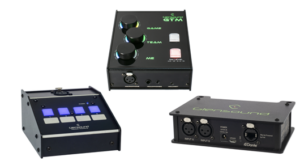 In the demanding world of live events, speed of set-up is critical, so networked audio has huge advantages in simplicity of connection. Glensound has a whole range of case-proven devices which solve every sound challenge from stage boxes to broadcast-quality commentary over a cellular phone. Where appropriate, each device is rugged enough to stand up to set-and-forget on the stage – throw-down ready.

Glensound was an early adopter of the Dante audio over ethernet standard, and its networked products consistently support the standard. Now it has added extensive support for AES67 audio, which introduces functionality – like the ability to handle higher encoding rates than 48kHz – which cannot be supported by Dante.

AES67 is available in a plug-in hardware module, like the Dante networking. This also allows advanced applications: the Vittoria network bridge, for example, provides firewalled connection between two audio networks, and now one of those could be Dante, the other AES67, passing 32 channels of audio between them completely securely.

One of the very special challenges of eSports is the need for each player to be completely isolated from the competitors. Glensound developed the GTM, a networked audio device which gives each player volume controls for the game, their team, and themselves (“game, team, me” or GTM), while ensuring that they are completely firewalled from other players. GTM sits on a Dante network, accepts local inputs from analogue and digital sources, and can both receive and send sound from an SDI video as well as the network. GTM is widely used by the eSports industry, and is continually evolving to meet the suggestions and requests of users.

“The live events market is consistently challenging,” said Marc Wilson, managing director at Glensound. “We are delighted to be back at a live PLASA show where we can talk face-to-face with our users and get the feedback which drives our development forward.”

A broad range of Glensound products will be demonstrated at PLASA, including the Nomad portable live audio unit using standard cellular connectivity, including 4G. With an XLR input and a headphone jack, it provides an ideal solution for remote commentary or interviews from inside the crowd, complete with talkback and cuing.

Marc Wilson and the Glensound team will be available throughout PLASA on stand F4. For more information on the product range, visit glensound.co.uk.