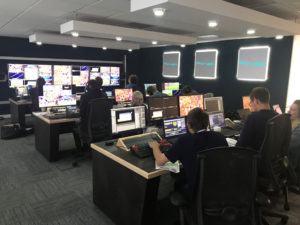 Watford, UK, 6 March 2020 – Gravity Media, the leading global provider of complex live broadcast facilities and production services to content owners, creators and distributors, has been nominated in the Best Sports Programme category at the RTS Programme Awards 2020. Its UK Production & Content team (known at the time as Input Media) has been shortlisted for its coverage of the FIFA Women’s World Cup semi-final between England and USA last July. The live broadcast on BBC One was the highest live TV audience of 2019 at the time as 11.7m viewers watched England lose 2-1 to the eventual tournament winners.

The BBC selected Input Media to produce live programming of the FIFA Women’s World Cup, which was held in France, for broadcast on the BBC’s network TV channels, BBC iPlayer and the BBC Sport website. Input Media had previously provided a similar service for BBC at the 2015 tournament in Canada. A record-breaking 28.1m people – 47% of the UK population – tuned in to watch the Input Media-produced coverage of the 2019 Women’s World Cup on BBC television and online.

Input Media presented on-site at the stadiums in France with a remote gallery and post-production facility at its Production Centre in Manchester.

Alex Scott, a pundit throughout the Input Media production, has also been nominated for an RTS Award, in the Best Sports Presenter, Commentator or Pundit category.

The RTS Programme Awards span all the genres of television programming, from soaps to history, children’s fiction to comedy performance. They recognise exceptional actors, presenters, writers and production teams as well as the programmes themselves. Winners will be announced at a ceremony, hosted by writer and comedian Paul Merton, on Tuesday 17 March at The Grosvenor Hotel in London.