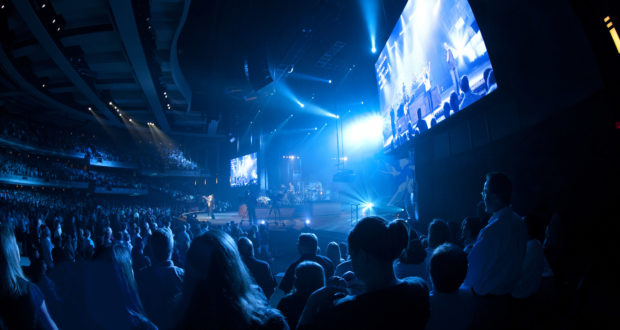 Woodbury, NY, March 1, 2017 — As one of the largest churches in the United States, Willow Creek Community Church places a very high value on the power of video to connect with its congregants both within and beyond its campuses. When the church upgraded its production equipment to high definition at its main site in South Barrington, Illinois, it selected HDTV cameras from Hitachi Kokusai Electric America Ltd. (Hitachi Kokusai) to capture and enhance the rich, immersive visual experiences for which its worship services are known around the world. A non-denominational and multi-generational Evangelical Christian megachurch, Willow Creek was founded in 1975 by Bill Hybels, who continues to lead the church as its Senior Pastor. More than 25,000 people attend worship services at Willow Creek’s main campus or one of seven additional regional locations each weekend.

Willow Creek undertook its HD upgrade for both practical and creative reasons. “Our existing equipment was between 10 and 15 years old, and reaching the end of its life cycle,” explained Darren Niesley, video director at Willow Creek. “At the same time, we wanted to provide an even better live media experience for our attendees.” Willow Creek was familiar with HITACHI cameras from the church’s work with mobile production specialist TNDV, who had provided equipment and services for Willow Creek projects including the annual Global Leadership Summit and its 40th anniversary celebration event. Pleased with the high-quality results of those productions, the church was very comfortable when systems integrator Clark recommended HITACHI cameras for the HD upgrade. Clark and Hitachi Kokusai worked closely together during the deployment. “Hitachi Kokusai was a great partner throughout the entire Willow Creek Community Church project,” said George Clark, founder of the integration firm.

Eight HITACHI SK-HD1200 portable HD studio and field production cameras plus two HITACHI DK-H100 compact box cameras are now used in Willow Creek’s 7200-seat main auditorium. Two SK-HD1200s are stationed on tripods behind front-of-house with Fujinon 55x lenses, with an additional SK-HD1200 on a jib. Five more such cameras are deployed flexibly depending on each weekend or event’s particular needs. “The cameras’ operational versatility is exceptional,” said Niesley. “We can configure them in so many ways, from handheld to full studio kits or tripods on wheels rolling around the front row, and with lenses ranging from standard 22x up to 40x telephoto.”

One of the DK-H100 box cameras is used with a Steadicam stabilization system, while the second is deployed in a Ross Video CamBot 500 configuration with both the robotics and camera itself controlled over a TCP/IP network. “The DK-H100 cameras provide the same great image quality as the SK-HD1200s, in a compact and lightweight form factor that’s perfect for these uses,” Niesley explained.

Switched through a Ross Video Acuity production system, video captured by the HITACHI cameras supports live image magnification (IMAG) on the auditorium’s two 24-foot by 14-foot Mitsubishi LED screens and similarly-sized, Barco-driven projection screen, as well as distribution to more than two dozen 55” monitors throughout the Worship Center and its lobby. “Because of the size of the auditorium, our attendees are looking to the screens not just for IMAG, but for a broadcast-style experience that gives them additional context they can’t see from their viewpoint,” said Niesley. “Our goal is to give viewers the ‘whole picture’, whether they’re inside or out of the room.” That out-of-venue reach extends to Willow Creek’s remote sites, which receive media files of the main campus services for showing on a time-delayed basis, and to live and on-demand streams that are seen by followers around the globe. Willow Creek’s annual leadership event is also privately broadcast to hundreds of venues across North America and packaged for subsequent distribution.

Niesley’s satisfaction with the HITACHI cameras spans both visual quality and operational benefits. “Right out of the box the cameras look really good, and are easy to automatically match,” he shared. “And while they offer deep, sophisticated control of all facets of the image, the programmability of the buttons on the RU-1500JY remote control units and the ease of switching between scene files let us make operation simple for our volunteers.

“Our move to HD with the HITACHI cameras has enabled us to more seamlessly integrate video into our live worship experience,” Niesley summarized. “The image quality is so high, and the cameras are so reliable, that people can just enjoy the program with no distractions.”