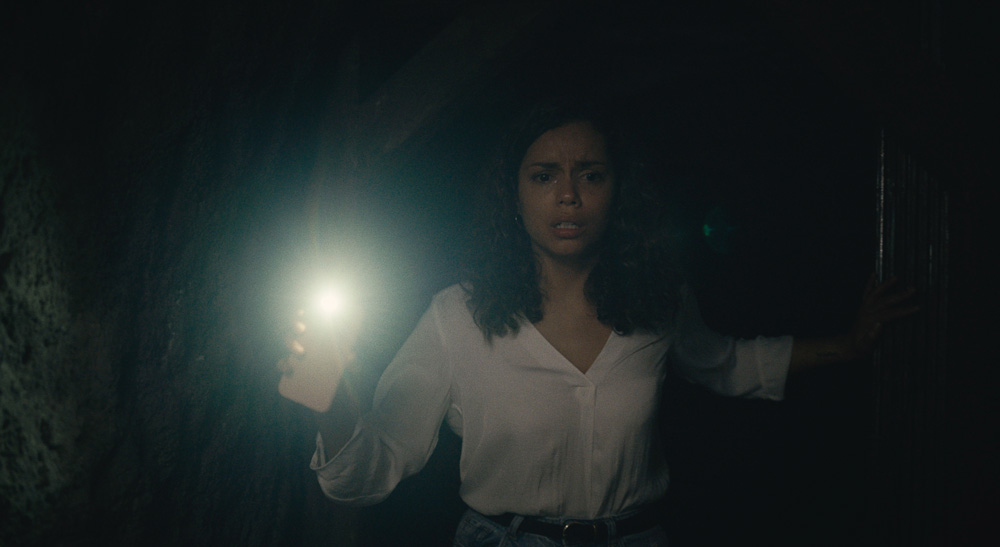 Produced by BoulderLight Pictures, “Barbarian” tells the story of a young woman who visits Detroit for a job interview, arriving at her Airbnb rental late at night only to find that the house has been mistakenly double booked and a strange man is already staying there. Against her better judgment, she decides to stay the night anyway, but soon discovers that there is much more to be afraid of in the house than the other house guest. The film stars Georgina Campbell, Bill Skarsgård and Justin Long.

The horror film was graded by Sam Daley of Light Iron using DaVinci Resolve Studio editing, grading, VFX and audio post production software. Though Daley doesn’t have many credits in the horror genre, his previous work with “Barbarian” cinematographer Zach Kuperstein, including “The Eyes of My Mother” and “The Vigil,” prepared him for the style that Kuperstein liked to shoot. “Zach and I already have a track record working together in the genre,” said Daley. “For this film, the mood was established with Zach’s lighting and the production design, with my job to interpret those visuals into the final look.”

Using DaVinci Resolve Studio, Daley created a custom LUT for production in Bulgaria, but when the final grade began, he provided looks to Kuperstein and director Zach Cregger. “I showed them different visual interpretations of the story, some pushing into the horror genre, others more traditional,” continued Daley. “The Zachs (Kuperstein and Cregger) chose a more traditional look for the finish. I think that’s partly why the look of the film stands out; we’re not announcing to the audience that this is a horror movie via the color grade.”

The story, with sequences shot in endless spaces underground, had minimal lighting. “There are scenes that take place in a network of tunnels that are lit only by a smartphone flashlight,” added Daley. “The Zachs wanted the audience to feel the claustrophobia of the space but didn’t want the actors disappearing into the walls. So I graded for the actors’ faces and let the flashlights clip a bit, as if your pupils are struggling to see what lurks in the shadows and not what the light is illuminating.”

Daley enjoys the OFX plug ins available in DaVinci Resolve Studio, and finds unique ways to use and combine them. “I like to layer film grain in two parallel nodes, one that simulates film negative grain and a second that simulates film print grain. However, for a sequence that takes place in the early 1980s, Zach wanted a crisp video look, so there I used the video noise option within the analog damage plug in along with a little bit of dehaze to give the image more snap. There are a couple brief scenes set in the current time period where a VHS video camera is seen in a room. There again I used video noise instead of film grain to help subconsciously link a story element.”

Though the film was shot in dark houses and dramatic settings, Daley found one of the most challenging shots was one less typical of the genre. “There was a drone shot over the Pacific Coast Highway that begins act two,” added Daley. “It starts looking into the sun and travels down to highlights glistening in the ocean and finishes on a backlit convertible driving along a rock wall on the highway. I flew in shapes and dynamics to make the exposure of the shot feel seamless. I also love to sneak in a little dehaze to bring out more saturation and detail.”

“Barbarian” is now streaming on HBOMax.