How Does Digital Video and Audio Processing Benefit Your Production? 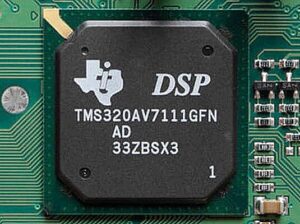 Digital signal processing (DSP) is a term bandied about often, but most of us never really understand what it actually means. In both professional video and audio applications, digital processing essentially uses algorithms to manipulate and change the image or sound files.

DSP is so widely used for such vastly different applications, it is often difficult to pin down exactly how it’s being employed at any given moment. DSP is everywhere — from when we make a mobile phone call, drive a car, use a computer or produce a video project.

So, exactly what is DSP? First of all, it not the actual main digital circuit of a device. It is a more abstract concept and can be performed on just about any digital hardware platform. DSP is defined as the digital process of analyzing, measuring and manipulating a signal using mathematical calculations.

That definition may sound hazy, but the singular purpose of DSP in media production is to improve the quality of the image or the sound signal that passes through it. That can happen in many ways.

Now a cornerstone of most modern digital products, DSP chips appear in a variety of sizes, prices and performance points. They scale up to multi-channel processors in professional studio equipment and automobiles, down to tiny, low-power chips for cheap consumer electronics. 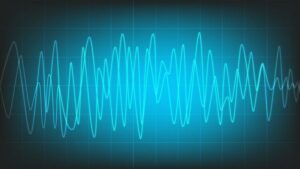 The DSP process involves the observance, analysis and transformation of a digital media file in almost real time. Often, the entire process is not even noticed by the user. DSP performs mathematical functions very quickly like add, subtract, multiply and divide. It then outputs the digitized information back for use in the real world.

Beyond just improving the quality of media, DSP is being used to manipulate video and sound as an artistic medium. Beginning in the late 1960s, video artists began to create tools for real-time manipulation of video signals through hacks to devices used for television production. It was the same with synthesizers for audio. This work has continued through the rise of DSP. The technology is now used by video and audio artists who are limited only by their imaginations.

The fact that DSP is found in such a wide variety of applications, it is often confusing to understand what it is actually doing at any given moment. This is because it’s an invisible process that has become so ubiquitous in our lives.

Let’s take consumer audio. Here, DSP works in one of two ways — either digitally or in an analog format by going through a digital-to-analog converter. As an example of this, think of a basic MP3 music player.

During recording, analog audio is input and then converted to a digital signal by an analog-to-digital converter. It is then passed to the DSP, which performs the MP3 encoding and saves the file to memory. 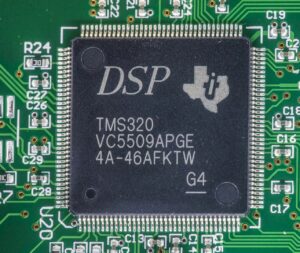 During playback, the file is taken from the player’s memory, decoded by the DSP and then converted back to an analog signal through the digital-to-analog converter so it can be output through headphones or a speaker system. DSP can also perform other functions such as volume control, equalization and as the device’s user interface.

DSP circuits can even provide information that is not sensed by humans, such as echo cancellation with mobile phones or computer-enhanced medical images. The applications, as we said, are endless.

Another powerful feature of digital signal processing is its programmability. The ability to write firmware for DSP chips opens the door to a constant range of new uses.

Its components are usually found within a single DSP chip, where all the necessary calculations and algorithms are performed. The DSP’s functionality contains program memory to store the data for processing; a computer engine to perform the math processing; and an output to connect the signal to the outside world.

In essence, DSP is used to enhance or improve a signal or to reduce undesirable artifacts in the signal. That’s a pretty big, ambiguous agenda. It can be hard to wrap our brains around how much DSP is already embedded in our daily lives.