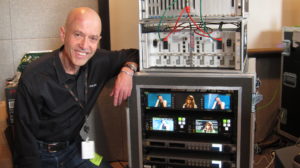 ers are used as source devices as well as in a flypack as Dolby captures content and manages proof-of-concept applications with broadcasters and live event companies all around the world. “We use the PIX 270i recorders pretty deeply, relying on all the different routing functions, using them for copying audio tracks, and exercising all the audio I/O. We find it to be a very flexible box,” says Mike Babbitt, Broadcast Support Director, Professional Support, Dolby Laboratories, Inc.

Two PIX 270i recorders are rack-mounted in a capture and encoding flypack that Dolby ships around the world. Having internal drives eliminates the need to hang external drives off of it and being rack-mountable and reliable is also a significant benefit. While there are a few capture devices with similar capabilities, the PIX 270i recorder offers unique functionality, such as the ability to route audio anywhere in the MADI output, in the SDI output or in AES outputs.

In 2015, Dolby recorded content at the Rock in Rio music festival in Rio de Janeiro, Brazil, capturing video and 128 channels of MADI using the PIX devices. This content was used for demonstration purposes with VIPs, as well as for local audio teams to play the audio back and mix it live to become familiar with using the new overhead speaker arrangements with Dolby Atmos.

In Rio, Babbitt captured 128 channels of MADI over fiber, but then had to convert those signals for a coaxial infrastructure, which the PIX 270i made easy. “There were 16 channels embedded in SDI that I captured on other devices, which needed to be converted to MADI or played out into other devices,” adds Babbitt. “With the PIX 270i, I was able to easily move these around as needed,”

Before deciding to add several PIX 270i audio and video recorders to his setup, Babbitt used the Sound Devices 970 audio recorder. While both recorders were comparable in terms of capabilities, the PIX 270i also captures video. Today, the Sound Devices 970 is still in use for some applications and it has been supplemented by close to a dozen PIX 270i recorders, scattered throughout the building and in the flypack.

“Beyond the flight pack use, we use PIX 270i recorders as a source for engineering,” he says “When you’re promoting a new format, such as Dolby Atmos, you often have to provide test files, and we use the PIX 270i recorders a lot for creating these files. Additionally, the fact that we can capture via any of the audio inputs is really handy because the audio comes in a variety of different formats, whether live or in a file. It’s becoming the workhorse for us.”