In the early 1970s, most wireless microphones were very pricey VHF models with hit and miss audio quality. Then came UHF models — still very expensive and not dependable enough. Performance was contingent on where the mic was used and what competing radio frequencies were in the area.

As far back as 1945, schematics and kits for wireless microphones were published in hobbyist magazines like Popular Science. These systems, however, only broadcast a short range to a standard radio receiver. In 1949, in Great Britain, Reg Moores built a wireless microphone for a production of Aladdin on Ice at a sports stadium in Brighton. It used an illegal radio frequency, but worked well enough.

Shure Brothers claims the first commercial wireless microphone for performers. It was called the “Vagabond” and was introduced in 1953. The system worked at about 15 feet line-of-sight. In 1957, Sennheiser, at the time called Lab W, debuted a wireless mic system. Marketed through Telefunken, it was a pocket-sized unit called a Mikroport and transmitted at 37 MHz with a range of about 300 feet.

The first patent for a wireless microphone was filed by Raymond Litke, an American electrical engineer with Educational Media Resources and San Jose State College. It was designed in 1957 to meet the multimedia needs for television, radio and classroom instruction. Litke’s patent was granted in 1964.

From day-one, there have been two basic styles of wireless mic systems: handheld and lavalier. The earliest transmitter module was a cigar-sized device that weighed seven ounces. Vega Electronics Corp. manufactured the Vega-Mike in 1959. It was first used by the broadcast networks at the 1960 Democratic and Republican National Conventions. The mic allowed television reporters to roam the floor of the conventions to interview participants, including presidential candidates John F. Kennedy and Richard Nixon.

In 1958, Sony came along with its CR-4 wireless mic, which used a 27.12 MHz solid-state FM transmitter capable of fitting into a shirt pocket. It used a tube-based receiver. A Beyerdynamic wireless system called the “transistophone” was used on actor Rex Harrison to record sound during the filming of My Fair Lady in 1964.

The first wireless mic with a compander was introduced by Nady in 1976. A compander is a circuit that improves the signal-to-noise ratio by compressing the range of amplitudes of the signal before transmission and then expanding them during reception. Todd Rundgren and the Rolling Stones were the first major musicians to use the Nady system in live concerts. 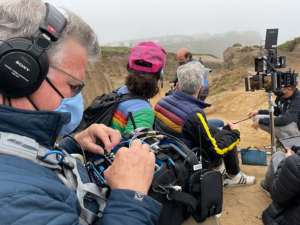 In recent years, due to a shortage of usable spectrum, a new type of wireless microphone has emerged. It operates on 2.4 GHz and has the benefit of being very low in cost. Most major wireless microphone manufacturers have debuted 2.4 GHz wireless systems in an attempt to avoid the frequency constraints of UHF models.

While most professional digital wireless systems still operate in the UHF band for better propagation and audio quality, the newer 2.4 GHz band has emerged as a good sounding alternative for smaller applications that require fewer frequencies.

Is 2.4 GHz wireless good enough for small scale video production? In many cases, the answer is yes. These all-digital systems are simple for novices to use and are less affected by intermodulation that can affect UHF bands. Later models also have an acceptable level of latency.

Wireless mics using 2.4 GHz frequencies can operated in any country without purchasing a license. With UHF frequencies, the rules change on a country-by-country basis. Using 2.4 GHz mics avoids regulatory confusion.

Since the chips in 2.4 GHz mics use shorter wavelengths, manufacturers can use smaller antennas and electronic systems for excellent performance at low cost.

As with every technology, there is a down side. A 2.4 GHz system may offer a good sound experience in an ideal environment, but the system has a limited channel count.

Also, spectrum for 2.4 GHz can get crowded with other WiFi and Bluetooth devices. Sometimes, depending on location, the spectrum might have to be shared with others. In some venues, mixing consoles use Wi-Fi for remote control. RF problems arise in unexpected places.

Heavy RF traffic in the 2.4 GHz band can adversely affect the mic’s performance. Symptoms can be a shorter than normal transmission range, frequent loss of signal and the inability to operate multiple systems at the same time.

The human body can absorb and block short 2.4 GHz wavelengths. This makes it essential to maintain line-of-sight between the transmitter and the receiver for the most reliable operation. Outdoor transmission distance is typically far less than indoors. And, microwave ovens can produce local interference in this frequency band.

The main challenge of using 2.4 GHz is that Wi-Fi traffic can be unpredictable. Choose a wireless system that prioritizes and transmits on the best three frequencies per channel. The system should pick from a pool of six frequencies across the 2.4 GHz band.

Make sure the 2.4 GHz system repeats the most important data so one frequency can be taken out entirely without interruption to the audio. Use equipment that continuously scans and ranks all frequencies during usage.

UHF may provide greater range than a typical 2.4 GHz system in the same transmission power and other conditions. However, the 2.4 GHz system tends to have more powerful transmitters to compensate for the loss.

A directional antenna can be used to improve the range. Using a 2.4 GHz system with long cables can affect stable transmission.

Wireless 2.4 GHz models like the RØDE Wireless Go II is a dual channel system that can record both channels with 128-bit encryption and has a range of more than 600 feet (line of sight). The transmitters can also record sound for over 40 hours on internal memory and operate on built-in lithium batteries. The system price is $299.

Choosing between 2.4 GHz and typical UHF mic systems depends on how the gear will be used. UHF systems should be picked when ultimate reliability and numerous channels are needed. This includes large concerts or theatrical events.

Good quality 2.4 GHz systems are an excellent option when only a few channels are needed and the user doesn’t want to deal with local regulations. Beginning at a couple of hundred dollars, 2.4 GHz wireless systems are a real bargain for small video crews seeking simplicity in the field.

But never count on any wireless mic system. Always carry wired microphones as a backup. One never knows with a wireless mic when trouble will strike. Pros know to be ready for it because every situation is different.