How to Avoid Misinformation in an Interview

Sadly, we live in the era of blatant misinformation. The old journalistic style of just reporting what a subject says can lead to a story not only being inaccurate, but becoming a contributor to the misinformation culture we live in. 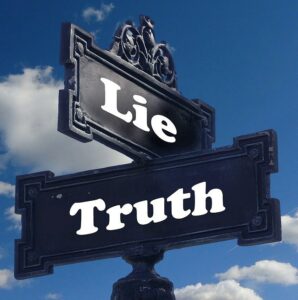 Subjects of all types — especially politicians — have always put a favorable spin on their public comments. That is nothing new. What is new is the flagrant statement of knowingly false information that is now found at every level of media.

In fact, the Journal of Basic and Applied Social Psychology determined that 60 percent of people can’t go 10 minutes without lying at least once. Most tell an average of three lies in a short conversation, a study by the group found. This can get very difficult for an interviewer seeking the truth about a story.

The question is — as a responsible interviewer — how do you handle someone you know is misrepresenting the truth? How do you overcome lies to make your reporting as accurate as possible?

This whole subject is a slippery slope, because no one completely knows what “the truth” actually represents. We humans are always trying to grasp it and often fail. What is as close to truth as possible is found by gathering all the evidence around us and making the best decision possible about what is real and what is not. It’s very much like the function of a courtroom jury.

But when sitting in front of a camera and microphone, the interviewer has the responsibility to be as truthful as possible. This is no easy task. Most human beings tend to be able to suspect lying in their subconscious mind, but often convince themselves otherwise in their conscious mind. Good interviewers must overcome that natural instinct and train themselves to detect deception. 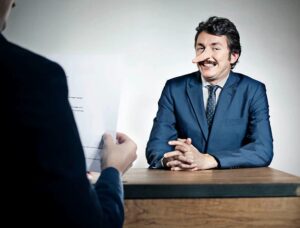 Interview subjects lie for many reasons. Sometimes it’s to protect or even create a public image. Other times it is to cover-up their own wrongdoing. The reason for deception can be anything. The job of the interviewer is to get the subject to tell the truth.

The best way to prepare for such as interview is to thoroughly study the topic being discussed in advance and be completely prepared. Know the facts and be ready to confront a person who misrepresents them. Unprepared interviewers are sitting ducks for “alternative information.”

A useful technique is to challenge a subject with your own research when they say something that is obviously untrue. Use open-ended follow-up questions that force the subject to explain their answer in more detail. This can trip-up one who is fabricating information and make them contradict themselves.

Sometimes, when the interviewer knows in advance a subject has a known reputation for spreading lies, the decision has to be made whether to do the interview at all. This decision can be a very close call, since by giving the subject, a public platform actually can contribute to the spread of misinformation.

If you decide the subject is essential to your story, be fully prepared in advance. Go in with a planned strategy to confront a known liar. This can become very uncomfortable, but it is the interview’s job to tell an accurate story.

It is important to understand the motivation for a subject’s lies. Is it because a person has something to hide, or is the subject part of a group advocating a controversial position on a public issue? Try to know your subject’s motivation before doing the interview.

Is the interviewee a flamethrower by nature or do they believe what they are saying is actually true? This is important to know.

All of us want our production — whether documentary, news or other — to be as truthful as possible. But today there are often groups determined to shape the narrative to their own point of view. Their view may not be an honest depiction of the story.

Exaggerations are another technique frequently used. The subject takes a morsel of truth and inflates it to change the real impact of an event. This can even come down to crowd size at a public gathering, when the subject makes it twice as large as it actually was. It is up to the interviewer to know the truth and confront the subject. Otherwise, he or she gets away with the exaggeration.

Sometimes you are actually in the interview and discover that the subject is not telling the truth. This one is the toughest, because the interviewer must think on the fly. If you are well-prepared and armed with accurate research, you can often spot a misrepresentation by just listening carefully. React when you hear the lie and counter it. 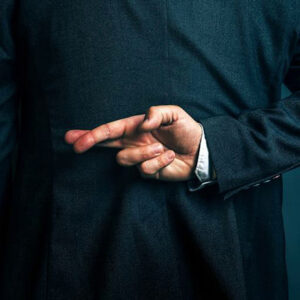 A very experienced manipulator, like an accomplished political press secretary, can mislead interviewers without saying obvious untruths. The art of deception becomes just that — an art form.

Sometimes, after establishing baseline behavior for a perspective subject, there is a giveaway in their behavior that indicates they are not being truthful.

The old adage that you can spot lies by the gaze of a subject’s eyes has been proven not to be always true. In some cases, liars can be spotted when their eyes change, meaning they suddenly blink or do some other movement when stressful questions are asked. But not always — it’s not foolproof.

Watch for the fake smile. If a smile looks forced or tense, there is a good chance your subject is lying. Changes in the pitch or pacing of speech can also be an indicator. Micro expressions, such as sudden flashes of emotion, sometimes trip up a subject who is not telling the truth. Stress can also be an indicator, though honest subjects can also show stress on camera.

The best way to spot a liar is to pay careful attention to what they are saying; have a good grasp of your research; and ask open-ended questions. Non-truthful interviewees can be very tricky, even when they think they’re being honest.

Well-trained interviewers have a rare talent. Today, they are more essential than ever for interpreting the facts in the new era of misinformation.