How to Capture Compelling Moving Images on Video 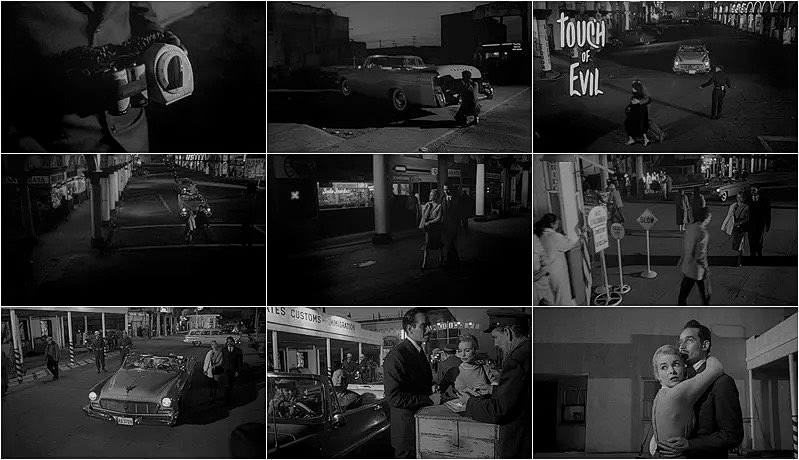 The scene was an awesome achievement in motion. The camera, mounted on a Chapman crane, begins on a close-up of a ticking bomb and slowly moves, ending more than three tension-building minutes later with a powerful blast.

Welles uses a constantly creeping camera coupled with a pulsing music score to create stress and suspense. The camera slowly moves up and down at different angles as it crawls down the town’s street. The intense audience hangs onto every second before the bomb finally explodes.

This legendary shot by Orson Welles is cinema artistry at its finest. It’s a perfect example of how the moving camera can be a key to unique and compelling moving images in a story. 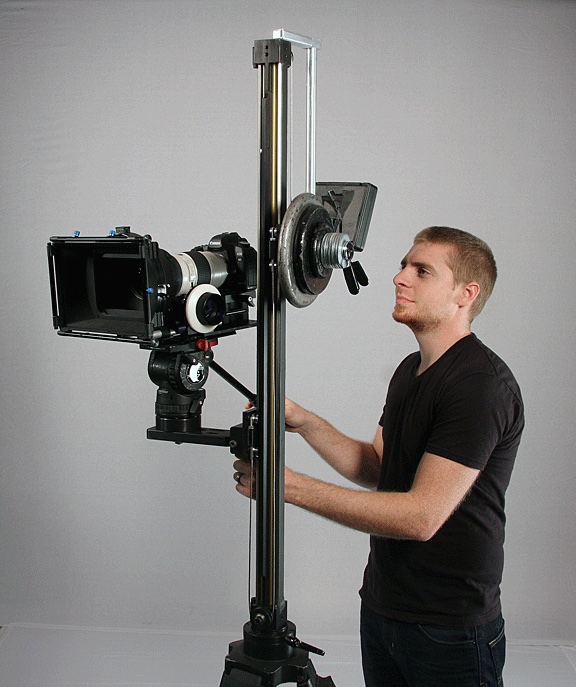 In the modern world — with zoom lenses on virtually every camera — the idea of the moving camera to many amateur videographers is constantly zooming in and out, either handheld or on a static tripod. Outside of some news shoots, this doesn’t cut it — even with an iPhone

In the time that Orson Welles directed A Touch of Evil, support gear to move cameras was huge, bulky and very expensive. Today, miniature versions are available of virtually every device, including cranes, dollies, pedestals and stabilizers. In fact, it’s a new golden age of accessories to help move cameras about.

It should be remembered that a zoom lens with its continuously variable focal lengths is not a tool designed to create moving images. When zooming in and out from a stationary position, the operator is only changing the angle of view of a scene without changing perspective. This is why zoomed images often seem dull and two-dimensional.

A scene’s perspective can be changed only by physically moving the camera. This movement helps create three-dimensional images and helps create dynamic, high-impact video scenes.

There are a few basic camera movements. Horizontal movement of a camera is called tracking and is usually achieved with a movable dolly. Vertical — or up and down movements — are called booming or craning and are achieved with a crane or jib. Each of these devices can be used in combination with each other to create a vast range of moving shots.

Dollies used to be massive, steerable, motor-driven units that were rented by the day. Now, however, small, inexpensive, suitcase-sized portable dollies are available that are designed for field production with smaller cameras. The dolly tracks are usually laid across a smooth surface or on pre-laid tracks. 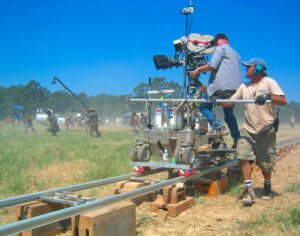 Any steady wheeled device that can move smoothly can serve as a camera dolly. In Stanley Kubrick’s The Shining, the director used a wheelchair for a dolly shot. Other devices for dolly shots include children’s strollers, shopping carts, toy wagons or bicycles. Some camera operators with very steady hands can do a handheld tracking shot without aid.

With any tracking shot, the trick is to keep the camera movement smooth. No question that pro gear makes it easier to achieve steady dolly shots, but, with practice, tracking shots can be perfected with the crudest equipment.

Both stationary and moving objects can benefit from tracking shots. Perception is altered with the movement of the camera. Slowly tracking the camera around a still object gives the audience a chance to discover and explore the subject. The camera can also be tracked for moving subjects.

Ronald Neame, British camera operator and film director, taught his directing students to combine the zoom lens with a tracking shot. “All the zoom does is magnify the scene. It looks very mechanical to zoom by itself,” Neame told his class. “You should never use the zoom lens unless you incorporate it with a tracking camera. I very seldom use a camera that doesn’t move in some way 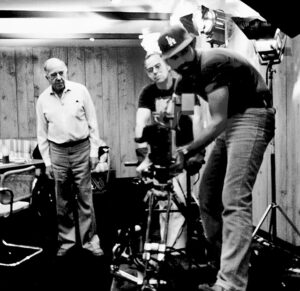 There are some situations where an extreme close-up is required of the subject but there is not enough time to track from a full length shot to a close-up. “In this case, I zoom at the same time as tracking,” Neame added. “That covers up the zoom. The mechanical effect is disguised.”

A smaller jib arm is often used to move a camera up or down for elevated shots or for sideways motion. Small cranes are often used where additional height is needed over standard studio pedestals.

For high shots during video coverage of outdoor events, large hydraulic cranes are often used. However, smaller cameras have allowed a generation of tiny, portable jibs with the ability to do crane shots with a single operator on location.

Make-shift cranes can also be devised. Any moving device, from elevators, escalators, forklifts or “cherry-pickers,” can move a camera. Even a “see-saw” with a wooden board can be used as a suitable crane. The camera operator can lie on one end of the board and an assistant can offer counter weight on the other end. The camera can be raised or lowered by shifting the weight on the board.

Crane shots result in specific audience responses, depending on the shot. Reason and motivation should be behind the use of crane-made images.

Combining a pan and zoom is another way to move the camera while disguising the zoom. “Let’s say you want to pan from one figure to another figure, to another figure and to another and keep them all in a close shot,” Neame proposed to his students. “You want to make them all the same size but they are all at different distances. Then you would zoom at the same time you pan the camera. The audience would never be aware that you had used the zoom.

Finally, image stabilization is an important technology for reducing the blurring associated with video camera movement. It can compensate for pan and tilt movements and camera rotation. Camera shake can cause visible frame-to-frame jitter.

Optical image stabilization steadies the video image by varying the optical path to the sensor. This technology can be implemented either in the lens itself or from inside the camera body. The key element of all optical stabilization systems is that they stabilize the image projected on the sensor before the sensor converts the image into digital information.

For handheld video — regardless of lighting conditions — optical image stabilization compensates for minor shakes whose appearance magnifies when viewed on a display. 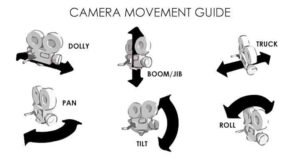 Some video cameras use digital stabilization — an alternative technique that shifts the image from frame to frame, counteracting the motion. This method uses pixels outside the visible frame’s border to buffer for the movement. It reduces vibrations in the video by smoothing the transition from one frame to the next.

As cameras become smaller, new technology is constantly being invented to create smoother movement. Understanding the effects of camera movement is an essential task for every videographer and director.

Movement propels the story and makes every shot count. Orson Welles’s opening shot in Touch of Evil was an important element in setting the tone for the entire film and something every director should understand.