File management for video editing is often the furthest thing from an editor’s mind at the start of the post-production process. The workflow to organize media is not complex — it just requires some attention to detail. Doing it can save hours of time down the road.

It is best to use a hierarchical file system to organize all the media elements into a single folder. This way the editor can go to a single place when needing to do any fixes or for archiving elements of a production. This simple one-folder technique can pay off big time in the future when having to revisit a project. 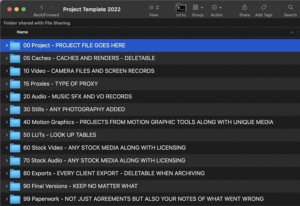 It’s an old story. When an editor is rushed (much of the time!) he or she tends to grab media assets from everywhere — including different folders, multiple drives, online or from the desktop. To not organize these snippets of media in a single place is just asking for trouble when the elements are needed later.

Some editors have tools for media management, but these often don’t account for LUTs (lookup tables), licensing notes, exports of deliverables or other miscellaneous information. All these elements are part of any editing workflow and can easily get out of hand. An intelligently organized folder structure can make all the difference when archiving and retrieving project files. 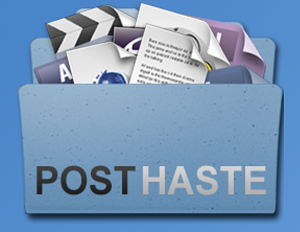 An example of a folder structure is provided by Rocket Yard, the blog of OWC, a company that makes storage equipment for editors. The files, of course, can be adapted, but it gives the idea of a good starting point. There is also a free third-party edit folder tool called Post Haste (www.digitalrebellion.com/posthaste/) from Digital Rebellion. It allows a variety of templates for different kinds of video projects.

The first file name in the Rocket Yard list — 00 PROJECT — is where all the project files go. In Adobe Premiere Pro, this might be pre-populated with sequences and bins, including naming tracks for the sequence. For Apple’s Final Cut Pro, it might include a library with common keywords. Either way, pre-import common elements that are used in every project, including client logos and audio elements.

Next is 05 CACHES. Caches and renders go in this file. A year later, if further work needs to be done of a project, having this cache data allows the editor to avoid having to re-render or index everything.

Then there is the 10 VIDEO file. This file holds all the camera files and screen records.

15 PROXIES. Having video proxies separated like this allows them to be accessed quickly for portable editing or remote workflows.

20 AUDIO. Sound effects and voice-over recordings go into this file.

30 STILLS. In this folder goes any still images that have been created, edited or downloaded for the project.

40 MOTION GRAPHICS. If any motion graphics are built, they are stored in this file. Same for imported elements like motion graphics templates. Everything used is stored here.

50 LUTS (Lookup Tables). All lookup tables or copies used in an edit are stored here.

60/70 STOCK VIDEO-AUDIO. Any stock video and audio goes in this file along with their associated licensing info. Print a PDF of the license agreement and file it here as well. This sort of organization makes it easy to dispute a copyright claim at a later date.

80 EXPORTS. Every export goes in this file. It can be useful down the road to have all the steps from scratch to final in a single place.

90 FINAL VERSIONS. Final versions of all edited projects go here. This folder expands as the editor does unique versions of a project for different types of media. Everything should be kept together to avoid later confusion. This storage avoids the problem having to trust one’s memory for such details.

And, finally, 99 PAPERWORK. All paperwork associated with the project goes in this folder. This includes project agreements, invoices and miscellaneous notes. If a document is needed later, the editor knows where everything is stored and it is easy to find.

Of course, editing file templates are personal and can be adapted any way the user likes. These are just examples. Such a filing system can serve as a map of a project’s workflow. The important thing is to create a consistent way to organize and store all editing data for the future. It can help avoid wasting valuable time down the road.