In the earliest days of small format video production, most professional crews worked as a trio: a camera operator/director, sound operator and a lighting/gaffer person. Today, in many production situations, three is considered a luxury. Often one person is expected to do it all three jobs at once. 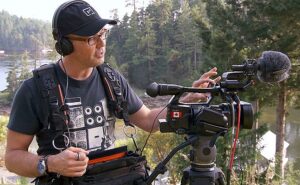 Having worked as a one-man-band myself, I understand the frustration this can bring to anyone who cares about good production quality in their work. It is a real juggling act, having to not only light and shoot a scene, but having to deal with sound as well.

Here’s a simple fact: working one-man-band comes down to a series of compromises. The trick is to balance each task so that it’s done well — if not perfect. This requires knowledge and is much easier said than done.

There are a few things I’ve learned from the single operator experience. First, keep the gear as light weight and as mobile as possible. Portability is king. Lugging around heavy equipment can wear anyone down and cripple any shoot.

To work as a one-production crew it is essential to know the basics of several disciplines. Camera movement and composition, simple lighting techniques and how to capture good sound are the most important. Knowing what works and what doesn’t is essential to being able to pull off a successful one-person shoot.

To begin, get a lightweight video camera and a good quality professional ENG tripod with a fluid head. There are very heavy tripods and very light ones. The happy medium is to match a good quality, very steady tripod with a compact camera. A cheap tripod and head will be trouble from the first shot. 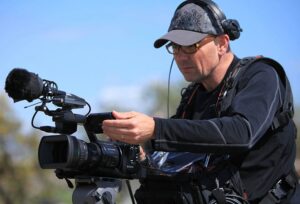 It is also useful for certain jobs to have a video monopod, which lightens the load. Some monopods have a small tripod on the foot that can help steady its use. A monopod can make a huge difference in fast run-and-gun shooting.

Get at least three very compact battery-operated LED lights, preferably fixtures that can used for key, fill and backlight. You’ll also need lightweight stands, a foldable reflector and some light modification tools. The idea is to use natural light as much as possible, but have the basic light fixtures when needed.

When shooting an interview in a home or office, do it near a window to get as much natural light as possible. With modern cameras, control of the light is more important than the quantity of light.

Finally, the big bear is audio. It is a well-known fact that sound quality is more important than image quality. You must get good sound and it will not come from the built-in microphone on the camera. Sound is perhaps the most difficult task for the single operator.

Again, like lighting, the operator has to know the basics of sound recording. Headphones are critical to monitoring sound while shooting video. Never just look at the VU meter and assume the sound is good if it moves. Always check the sound on headphones before the shoot begins and during it. 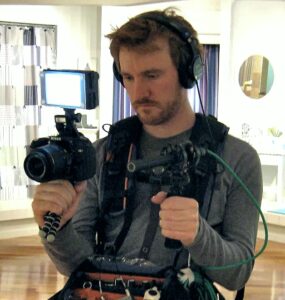 Use over-the-ear, closed back headphones on location. This type of headset isolates you from outside sounds not captured by the microphone and will offer an honest assessment of the sound being recorded.

It is always good practice to record double-system sound on both the camera and an outboard recorder, but this is not always possible. When recording audio only on the camera, make sure the camera you use has both a microphone input and a headphone output. Not all small cameras have these audio connection jacks. Without them, you will have to use double system sound to ensure good quality.

When monitoring audio through headphones, there is a lot to listen for. Not only must the mics be placed properly and the level meter shows proper gain, but listen carefully for unwanted wind noise, plosives, sibilance, mic handling interference, buzzing, hum or anything that doesn’t sound normal.

When working one-man-band, the choices of microphones are also important. Since it is very difficult for one-person to shoot and handle a shotgun on a boom simultaneously, workarounds are essential.

A good choice for one-personal operators are wireless mics. There are many models of 2.4 GHz wireless mics with the microphone built into the transmitter. Many wireless mics support two separate channels into one camera-mounted receiver. 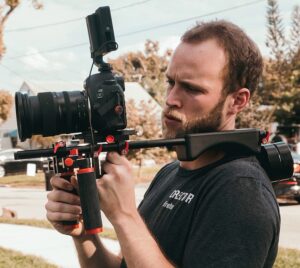 These wireless mics work well for doing two-person interviews. Also, a camera mounted shotgun mic can help acquire ambient sound and a dynamic handheld microphone can be used for interviews. These are all basics for the kit of the single operator.

Make sure you have wind protection on all mics used outdoors. This can make or break the audio on a windy day. Use the furry type wind screen, not the cheap foam variety.

Today, the single person production “crew” is often called a “multimedia” reporter. Having only one skill set is no longer enough if these functions are combined and done well. Camera, lighting and sound are all essential skills for doing a good job.

It is possible now — with the extreme miniaturization of equipment — to combine all the necessary gear into a single camera bag (with the exception of the tripod/head.) This will require careful choices tailored to the individual’s working methods. Be sure to organize and practice carrying this gear package around to make sure you can handle it alone.

The best way to prepare for one-person video production is to gain knowledge of the basics of the camera, sound and lighting. Learn to protect yourself from making critical mistakes.

It is all a series of compromises, but can look quite professional as many online producers have demonstrated.