How to Record Good Audio Outdoors in Extremely Bad Weather 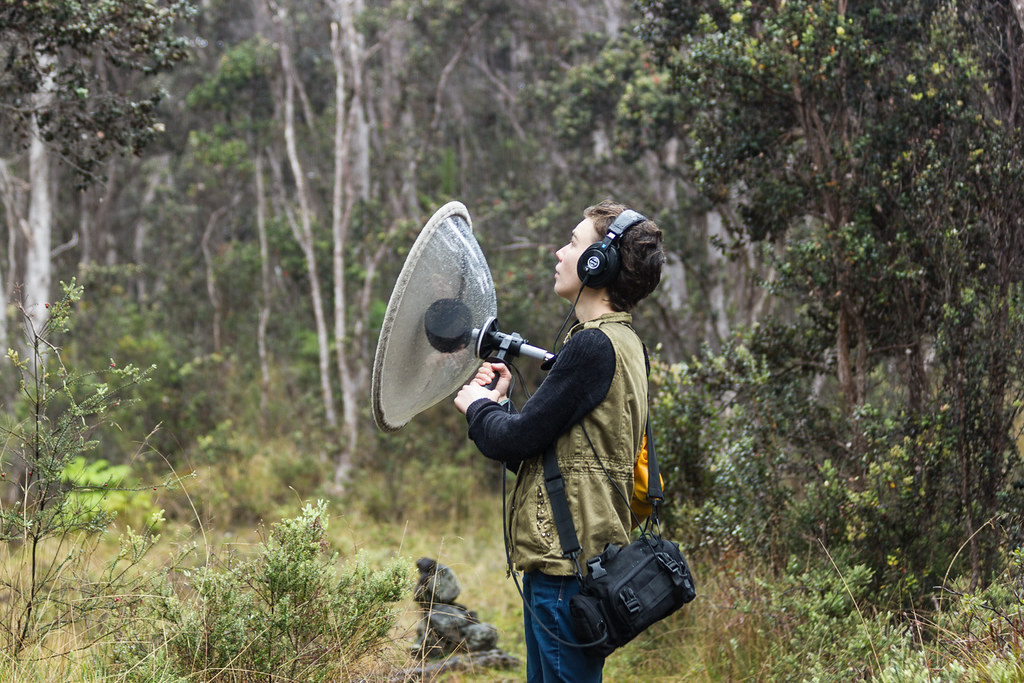 One of the greatest challenges audio recordists confront is getting good sound during extreme weather conditions. Resolving severe climate problems comes down as much to experience as the right equipment and preparation.

There are basic things sound operators need to know when working in bad weather. First, certain microphones don’t like temperature extremes. Many condenser mics, especially the lower-cost models, are sensitive to the hot sun and extreme humidity. Yet using a mic in such conditions is sometimes unavoidable.

In humidity levels of 90 percent and temperatures above 100 degrees, the sound operator enters a danger zone and needs to exercise extreme care, both in recording and shipping the microphone. In such situations, monitor the sound very carefully.

Problems often arise during rapid shifts in temperature and humidity. Condensation resulting after movement from cold to hot environments can cause artifacts such as hissing, crackling or popping in the audio. Even the frequency response of the mic can change or sometimes the mic fails completely. After use in such climates, a microphone should be dried with a cloth and placed in a desiccant bag to absorb the moisture.

The best practice, when it can be done, is to allow the mic to acclimate to the new working conditions before use. This can be especially challenging when moving from an air conditioned space to extremely hot weather. Including packets of silica gel inside equipment cases can help reduce the severity of the temperature change.

Back when I operated sound for network video crews in the very humid environment in Miami, Florida, I often placed the shotgun mic and ¾-inch video recorder at an open window at night to allow the gear to acclimate to the humid environment before recording the next day. It didn’t always work, but it helped reduce the dramatic temperature difference between the air conditioning in the room and the outdoor humidity.

These microphones and other high-end RF shotgun microphones are virtually immune to poor weather conditions. They also have lower self-noise than inexpensive shotgun mics. You get what you pay for and that’s the reason these top-of-the-line mics are the choice of so many professional video crews.

When using any kind of microphone — shotgun, handheld or lavalier — it is best not to let the mic get wet during the shoot unless you are using a waterproof model. Waterproof microphones must meet IPX standards — either as IPX7 or IPX8. An IPX7 rating means the mic can be dropped in water up to three feet deep for half an hour and it should still work normally. (I never tried to test this theory!) 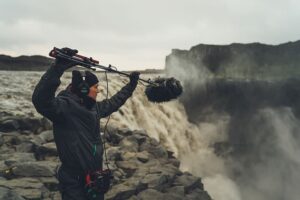 Always know the specs of the mics you are using. When using standard mics in wet conditions, ensuring good sound can be tricky. Avoid covering a microphone with plastic because it can adversely affect audio quality. Some operators hide a lavalier mic under a hat or clothing to protect it against rain. Each situation is unique and human imagination is often needed to solve rain problems.

There is a good lesson about climate from the sound operators at the White House. The communications team has long used Shure SM-57 microphones for the president’s audio due to the dynamic mic’s extreme reliability under a wide range of climate conditions. These mics are shipped around the world and work well in any climate — rain, sleet, snow and blazing heat. These mics have never failed.

Reporters doing stand-up news reports in windy, wet hurricane conditions usually employ dynamic microphones to withstand the tough environment. Dynamic mics even perform well even in the severe wind and rain of hurricanes. Every video crew should have a basic handheld dynamic mic for those times when the going gets really rough.

Another environmental condition affecting audio recordists is wind. Uncontrolled, wind bursts can render audio useless and there is no way to repair the damage in post-production. When recording outdoors, all microphones require a windscreen — even on a still day.

Since the mass of a condenser diaphragm is much lighter than the diaphragm of a dynamic, condenser mics are more susceptible to wind noise. Condenser mics require a large windscreen for outdoor wind protection.

Low-cost windscreens normally included with new microphones are typically made from open-cell urethane foam. Their effectiveness is limited and won’t do much good outdoors, even in moderate breezes. More professional windscreens are needed for the job.

Rycote, a major manufacturer of professional windscreens, makes a range of wind protection gear from furry softies to zeppelin-style windshields. To protect against strong gusts of wind, Zeppelin-style windscreens place the microphone inside an enclosed frame with a cloth exterior.

These Zeppelin screens get the nickname “blimp” due to their looks. They can attenuate wind by about 35db. When wind is especially strong, a artificial fur cover (often called a “dead cat”) is wrapped over the blimp. These covers can eliminate wind noise up to 60 miles per hour. Professional windscreens are expensive and most cost between $300 and $500.

Working in extreme weather conditions is perhaps the most challenging task for a video sound operator. For professional video crews who work around the globe in a wide range of climates, most use high-end RF technology condenser shotguns, waterproof lavs and dynamic hand mics with good wind protection. This gear has proven effective for the most rugged field use in bad weather.