How to Use an Establishing Shot in a Video Story

Establishing shots in video stories are used for a specific dramatic purpose. The shot sets up the context of a scene. It usually is an extreme wide shot that shows the viewer the locale of where and when the story takes place and sets the mood of the narrative to come.

For example, in most Hallmark movies, the establishing shot is an aerial shot of a small, quaint contemporary town. The shot conveys a feeling of an idyllic community in a typically beautiful location — the background for the perfect love story. This differs from the gritty urban downcast scene that might be used to open a story about serial murders.

The establishing shot is usually an image of a place or environmental setting. Many such beauty shots are now made with flying drones for sweeping overview shots. A shot of an office building in a city sets the scene for an operating business. A shot of the exterior of a house conveys daily life inside a home. The job of the shot is to place the characters in a certain kind of setting before the narrative begins.

Sometimes establishing shots are intentionally omitted. They tend to be skipped to propel a scene along more quickly or are left out to obscure details in a mystery. Sometimes the setting is described in on-screen text, as is done with the TV series, Law & Order.

Sometimes, especially in horror films, a very low-angle establishing shot of a building or place can suggest that a sinister story is about to happen. In this case, the shot establishes an ominous mood and prepares the viewer for the shock ahead. 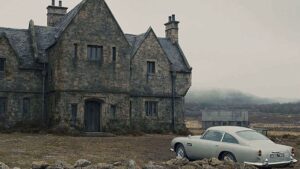 An exterior establishment shot of a building at night followed by an interior shot of people implies that the conversation is taking place at night inside that building. An establishing wide shot of a room can show all the characters at once. For example, a wide shot of a college class in session could be the prelude to a murder in the same room. The shot simply establishes the setting of the crime on a college campus.

Establishing shots can also establish a concept, rather than reveal a location. A scene could open with falling rain to establish a dreary day or with soldiers marching — establishing a story with a military theme. The idea is to communicate the underlying context of the story before the action begins.

All video productions should serve some type of narrative story. An establishing shot is needed to orient the audience to where and when the story takes place. Otherwise, the audience can be lost before the narrative even starts.

TV sitcoms dating back to the 1950s have often used establishing opening shots. Many opened with shots of a house. This shot quietly communicated several things. Are the people of that house upscale suburbanites (Leave It To Beaver; Father Knows Best, The Adventures of Ozzie and Harriet), or, if the house is a gaudy mansion, are they are rich (The Beverly Hillbillies)?

These images also communicate to the audience consistency and stability in a sitcom — the story is set in a familiar location. There is a row of fake houses used for such establishment sitcom shots on the Universal Studios backlot in Hollywood.

Films often use a unique type of signature establishment shot. Film director John Ford often used the background of the Monument Valley, the vast Navajo tribal park on the border of Utah and New Mexico. He filmed the Monument Valley for his 1939 classic, Stagecoach, and ended up doing six more Westerns there. The valley’s scenic beauty became the establishing shot for many of Ford’s westerns, and of western star, John Wayne.

Establishing shots can also set the era of the story. For example, director Orson Welles’ The Magnificent Ambersons (1942) is set in the last decades of the 19th Century. In an establishing shot, it shows characters on a sleigh ride, who pass a “horseless carriage” that has gotten stuck in the snow. This scene sets up the period of the film and shows the pre-industrial-era technological conflict of the time — the emerging automobile versus the horse and buggy.

Establishing shots can also show the passage of time. As an example, a scene at a park shot at different seasons reflects that time is shifting. The same time shift can be done using a single tree or plant.

In narratives where information needs to be held back from the audience until a later time, early establishing shots are not appropriate. This is done when the narrative needs to build toward revealing a shocking establishing shot. This is often used in war dramas, when the establishing shot is a field of dead soldiers. The battle leads up to the wide shot, which is the story’s climax.

Establishing shots should be invisible to the audience, though the shot itself should be constructed to offer specific information. It should set-up the scene and flow smoothly into the action. These shots can do a lot to set the tone of any story.