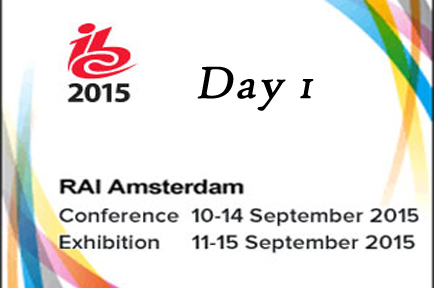 The 2015 Amsterdam IBC Show’s first day (second if you include Thursday’s conference-only day) was kicked-off with a huge helping of information and fun at the Amsterdam RAI Congress and Exhibition Center. Hail, hail the gang’s all here! The big players and the up-and-comers are here to ply their wares for their friends in media: Arri, Audio Network, CueScript, Forbidden Technologies, Metraweather, Ridel, Blackmagic, Cinergy, AVL Technologies, Imagine, Sony, Starfish Technologies, TVU, and Vizrt, just to name just a few.

The IBC Drone Zone opened at Noon today (and ran through 5pm). It’s been such a smash that it’s part of the show for now. Today’s robotic fun was held out of doors, next to hall 13 in a 2,025 Cubic Meter enclosure. The world’s top civilian drone manufacturers brought out some of their finest aircraft to display.

The speeches and seminars and conferences were kicked-off this morning promptly at 8:00am, with the delicious IABM Breakfast. The topic of the meal was: Where’s the money in broadcast and media? 16 other topics and 2 keynote speeches rounded out a very educational day. The 2 keynote speeches were:  Programming with Global Ambition and The Remarkable Expansion of Discovery Communications. Directing this topic were 3 of the UK’s finest Media Executives, featuring expert commentators Kate

Bulkley (Journalist, writer, presenter, analyst), Jean-Briac Perrette (President of Discovery Networks International) and (Product/ Director) Dan Chronnell. The second Keynote was at the very end of the day, and the topic was: In Conversation with… Chaos and Quality – the foundations of TV’s New World Order; this was with UK Media Commentator and Journalist Ray Snoddy, and (drumroll please!) Lord Michael Dobbs – the Creator and Executive Producer of House of Cards. 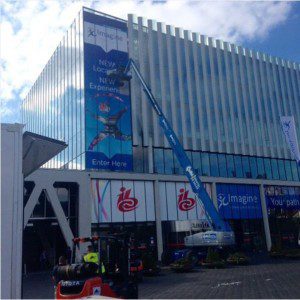 Getting ready for the Show!

Blackmagic was the winner of the Broadcast Beat Award in the category of Innovation-Content Creation, with the Blackmagic Micro Studio Camera 4.  The exhibit  was a sight to behold, along with the award winner, Blackmagic also had several other fine new products  on display: the ATEM 2 M/E Broadcast Studio 4K, Blackmagic Micro Cinema Camera, the Blackmagic URSA Mini, DaVinci Resolve 12, DeckLink 4K Pro, and other cutting-edge programs and machines were on display, as well. A veritable cornucopia of winning products:

A B4 lens mount modification for our new URSA Mini PL camera designed to replace the existing PL lens mount on Blackmagic URSA Mini PL, turning it into a B4 camera for HD. To install the B4 mount, customers simply take the PL lens mount off where it is normally removed for shimming PL lenses and bolt on the B4 lens mount. This is a true lens mount replacement that features precision glass optics specifically designed to match Blackmagic URSA Mini’s sensor with high definition broadcast B4 lenses. The B4 mount also features spherical aberration correction so customers can use their lenses wide open with no blooming effect. It can be used with both 4K and 4.6K PL models of the URSA Mini.

A new high performance capture and playback solution that puts the power of eight DeckLink cards onto a single circuit board that plugs into a single PCI Express slot. Designed for developers and OEMs, DeckLink Quad 2 is the ideal solution for media play-out servers, multi screen digital signage servers, real-time processors and more.

This is a major update for its Blackmagic MultiView 16 that features new audio meters, enhanced on screen labels, RGB output over HDMI and more.

With the  update, customers can now view audio meters independently for each video input. The meters are superimposed over the video in all layouts including 2 x 2, 3 x 3, 4 x 4 and solo view; and they feature correct VU ballistics that accurately conform to the VU meter standard. This means broadcasters can rely on the on-screen meters and use them as an accurate tool since they are designed to adhere to professional specifications and behave in the same way as a mechanical VU meter. In addition, on-screen view labels now resize proportionally based on the selected layout so they better match the view size. Both audio meters and labels can now be turned on and off independently using the on screen menus.

SD anamorphic support is also added to let customers view 16 x 9 anamorphic SD video sources in widescreen. This update adds support for RGB output over HDMI for greater compatibility with even more Ultra HD displays or televisions, and improves the clarity of output when MultiView 16 is used with regular HD displays.

The new DaVinci Resolve 12 is the software’s biggest update ever and includes incredible new features, making it both the world’s most powerful editor, as well as the most advanced color grading system. 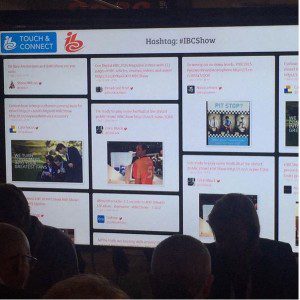 “Great Scott!!!” Cinergy got a hold of Doc Brown’s Delorean Time Machine from the Back to the Future film trilogy! It’s here in Amsterdam today. Along with this time-hopping machine of tomorrow, Cinegy also brought along several other interesting products for us to examine: this year’s Version 10 of four of its finest products; Cinegy Desktop, Cinegy Air PRO, Cinegy Capture, and Cinegy Multiviewer.

Swing by Hall 5 at stand 5.A49 to check out some of AvL technologies’ latest offerings. Already well regarded for their exemplary customer service and support, AvL Technologies designs and builds some of the world’s best antenna systems. Headquartered in Asheville, North Carolina, this company boasts the US Military and several of the world’s top media companies as customers. Specializing in designing and manufacturing transportable motorized antenna systems and positioners, AvL Technologies packs a boatload of top of the line features into their products. Some of their antennae systems are even small enough to bring into a commercial airline cabin – thus facilitating mobility for their clients. In Disasters, Emergencies, or just for Entertainment or Education, AvL technology connects the wireless world with their antennae for Military, Medical, and Media use. 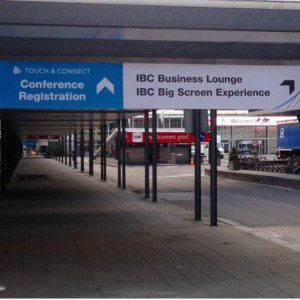 The IBC Complex is HUGE!

Imagine has its footprint at the Amsterdam IBC shows. What better place to house state of the art tech 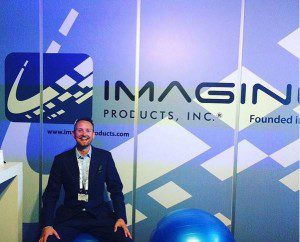 than a state of the art building? Get some hands-on time with the latest tech from Imagine in the RAI Amtrium. Versio 3.0 is Imagine’s star product this year at the Amsterdam 2015 IBC Show. Cloud connected and capable this leading edge solution will help many a studio enhance its customer’s available services for their clients. Pop-up and specialized channels as well as a reduction of the clients former infrastructure requirements, along with the virtualization of the master control. Adaptability, Dependability, and a generous feature set are the hallmarks of Imagine’s Versio 3.0!

Sony, a company that never ceases to amaze, did not disappoint at this year’s IBC Show! Making the Amsterdam announcement of the new Sony PXW-FS7 XDCAM Super 35 Camera System, the 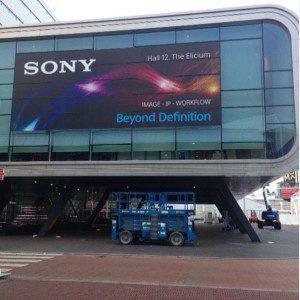 super-sleek and ergonomically-designed camera is versatile enough to go from “Cinéma Vérité”-style documentaries to reality TV and even to commercial and corporate applications. Containing a super 35mm-size sensor that can record images with stunning cinematic depth of field, it can create footage on optional on-board XQD media cards in either DCI (4096 x 2160), UHD (3840 x 2160) at up to 60 FPS or HD at up to 180 FPS. Recording in your choice of XAVC-I, XAVC-L, or MPEG-2 (the latter of which is limited to recording HD video only and does not support the high data rates the camera is capable of generating when shooting in UHD), E-mount lenses capture the action (or, with the use of optional adapters, can accept most 35mm lenses including PL, EF, Leica, and Nikon) in the Dual XQD media card slots that allows for simultaneous or relay recording. See more on this superb pro device at: pro.sony.com/bbsc/ssr/show-highend/resource.solutions.bbsccms-assets-show-highend-fs5.shtml?PID=I:PXWFS5:PXWFS5_landing 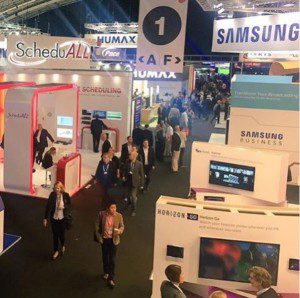 TVU Networks, a global technology provider of live IP video solutions, presented its new IP video marketplace – TVUMe – for the first time in Europe. TVUMe gives broadcasters the ability to find and purchase live or recorded video content online from other broadcasters, freelancers and independent production crews from all over the globe. Paul Shen, CEO VP of TVU Networks, said: “TVUMe expands the ability for broadcasters to deliver more live news coverage to viewers from more places and faster. 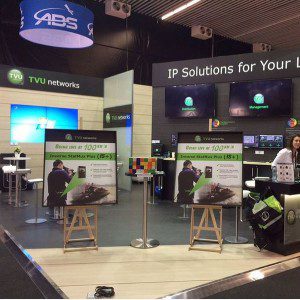 TVUMe’s ability to facilitate real-time transactions between broadcasters and video content providers from a single web interface can capture and deliver breaking news with a click of a button. The new features we have added to TVUMe provides more management and control over content distribution, increasing the speed by which news can be shared.” The service is a natural follow for their main product, the TVUPack. Using the TVUPack Portable Studio means you’re quickly in, quickly set-up, and broadcasting in seconds. How many seconds, do you ask? The TVUPack starts-up in 20 seconds from a cold start; it automatically establishes all available wireless connections, giving the ability to broadcast live in no time. TVUPack provides broadcasters with a cost-effective alternative to traditional satellite and microwave trucks. Units cost a fraction of the price of traditional OB vans, and TVUPack customers are able to additionally lower operating costs by reducing the dependence on expensive satellite links and removing the need for additional engineers in the process. Since its founding in 2005, TVU has provided solutions that enable any size broadcaster to overcome the limitations of traditional broadcasting infrastructure, expand distribution to a wider audience and capture and broadcast live video content in a cost effective way. For more information, go to: www.tvunetworks.com/tvu-networks-introduces-tvume-at-ibc-2015/ 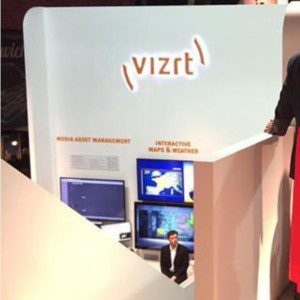 field-side advertising boards can now be replaced with realistic, virtual signage in real-time and throughout live gameplay. Viz Engine, the 4K multi-channel graphics and video playout server, a cloud-based Graphics Hub and J2K, SMPTE-2022 and Sony LLC streaming services are also on display. One of the many jewels is the latest version of the Viz One media asset management system which, when combined with Viz Engine, will demonstrate an extremely fast SAN storage and playback production workflow, allowing easy collaboration between graphics departments and broadcast centers. The cloud-based system empowers Viz Engines in multiple locations to playback real-time content from the cloud – a feature ideal for broadcasters with separate production hubs and OB facilities. Vizrt unveiled a new HTML-based plugin for newsroom systems, containing an intelligent user interface compatible for Mac and PC, giving journalists an easy-to-use tool for populating graphics templates, browsing and preparing videos as well as setting up automation controls and videowall presets. Other innovations at the Vizrt booth include the new Preview Desk tool, Show Maker, the latest version of Viz Multiplay, and so much more! See a more complete listing at: www.vizrt.com/incoming/43856/IBC_2015 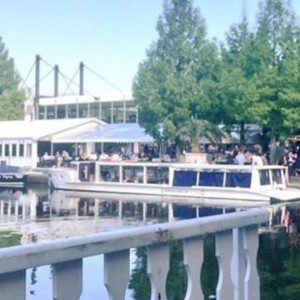 The ONLY way to arrive!

With Day 1 of IBC 2015 (well, Day 2 if you consider the fact that the conferences began yesterday, on the 10th) now behind us, we can look to tomorrow and see what the second day in the exhibit hall will bring! I hope you’re staying blogged-in and on target with all of the IBC 2015 coverage we are bringing!