“A PlayBox Technology CIAB installation was the obvious choice for this new network,” comments Libirel Communications senior engineer Declan Goulding. “It enabled us to get Ibrarn to air quickly with a compact and fully self-contained solution.

“Ibrarn Television operates a 24/7 service so we have installed two complete systems in main and redundant configuration. Each includes a CaptureBox HD ingest module, TitleBox interactive graphics generator, ListBox offline programme scheduler and AirBox automated playout. Also incorporated is a SafeBox content replication module which manages content sharing across multiple devices. Content can be sourced as files from a 15 terabyte network-attached storage server or live from a three camera studio. 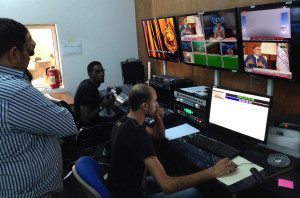 “The PlayBox Technology system occupies just six rack units of space, enabling us to accommodate the entire apparatus-room installation in a twin-column rack housing with plenty of room for expansion. Monitor outputs are connected via a router to multiscreen panels in the master control room. The transmission feed is then forward to an adjacent satellite uplink antenna. The entire project has proceeded very well with superb support from the PlayBox team.”

Ibrarn TV’s live studio and file-based playback launched on November 2013, via a Eutelsat link to Nile Sat at 7 degrees west (H 11525), with a variety of content primarily in the Tamazight language. The network’s output to date has included live broadcast coverage from Paris of the International Conference on Libya.

Declan Goulding is one of Ireland’s leading video and audio solutions engineers. After graduating, he started his long television industry career with RTE, Ireland’s national broadcaster. A ten year spell followed at Windmill Lane Pictures, followed in turn by work on creation of the ï¬rst all-digital facility, The Mill. After projects in Ireland, including the introduction of broadcasting facilities to the Irish parliament, work moved farther a ï¬eld, to the Far East. In Hong Kong, work was carried out for Star TV and ABN among others. Subsequent projects have been carried out in Eastern Europe, Northern Africa and England.

PlayBox Technology (www.playbox.tv) is an international communications and information-technology company serving the broadcast, corporate and digital signage markets in more than 100 countries. It is dedicated to the research, design, development and provision of the best products, systems, solutions and services. With over 13,000 TV and branding channels powered by PlayBox Technology, the chances are you will have experienced our broadcast solutions for yourself. Users cover a wide range of today’s broadcast activities and include start-up TV channels, webcasters, DVB (IP/ASI) TV channels, interactive TV and music channels, film channels, remote TV channels and disaster recovery channels as well as satellite, local, regional, national and international broadcasters.