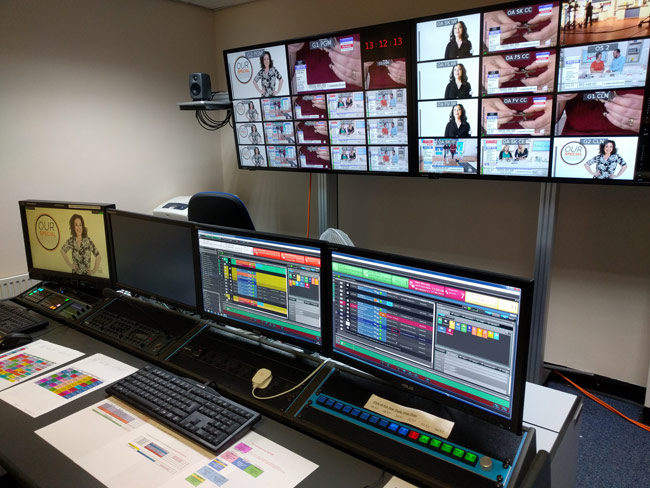 ISD is one of the most prolific broadcasters of live television in the UK, broadcasting on TV and online in the UK and US to over 70 million homes. The company recently undertook a major infrastructure upgrade of its Peterborough-based facility which houses production and transmission operations for its five channels: Ideal World, Create and Craft, Create and Craft USA, Ideal Extra and Craft Extra.

With much of its equipment reaching end of life, ISD needed to avoid the threat of ‘going dark’, and to make technology selections which would allow the company to evolve and grow its broadcast and online content offering as required.

The goal was to put in place a future-proof, IP-ready infrastructure and to transition to a state-of-the-art playout solution.

ISD evaluated a number of automation solutions and chose Pebble Beach Systems for its ease of use and intuitive interface. Pebble’s open API was also an important factor as it enables ISD to integrate other specialist best of breed technology, and the graphics plug-in capability made a big difference too.

For additional control, ISD has deployed Lighthouse, Pebble’s browser-based, remote management, control and monitoring product for Marina to give the teams in the US access to the UK system and enable them to load playlists, edit and delete events as needed.

“From a training perspective, we’ve had quite a few new members join the engineering and transmission teams, and bringing them up to a level where they can use Marina has taken significantly less time than with our previous system. It’s really quick to teach someone the basics. It used to take us up to 4 months before we could trust a new operator to be in charge of transmission on their own. With Marina our new operators were on solo shifts after about 4 weeks, without any prior transmission experience. That’s a big win for us. It was very manageable for us to build the lists prior to going live, and we had quite a tight time schedule to get people up to speed on the new system, but because it’s so intuitive it was a straightforward process. And it’s been rock solid since we took it to air,” explained Alan Wells, Technical Director at Ideal Shopping Direct.

While ISD’s playlists lists are typically built a day in advance, the very nature of the channel’s business means that shows change constantly and the team has to amend playlists as required while they’re on the air. Shows get dropped, one-hour shows can become two-hour shows, live shows can become repeats, and repeats may be substituted for one another because there’s no stock. “We are constantly adapting and changing our schedules and playlists, and Marina makes this process easy for our teams,” said Wells.

With the old system, ISD had a number of people whose task was to manually operate the changes between live and pre-recorded events. Now with Marina, the transmission team’s main task is simply to maintain playlists. “During the day we are predominantly live, so that’s exactly the kind of set up we needed. Later in the evenings and during weekends, the production department can now make scheduling changes remotely from home using the Lighthouse web browser,” he added.

“So far, we are really pleased with the outcome. In the future, we are also really interested in looking at putting in place standby events, which would be really easy to implement with Marina. These backup events only play if you enable them, and you can line up second or third choice events to play if for example the main event is for an item which sells out, or simply isn’t selling at all. Or if we need to evacuate the building and we’re live this could be an ideal solution. I expect this will be a game changer for us,” concludes Wells.