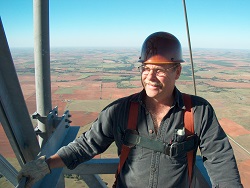 MELVILLE, N.Y. — Nov. 11, 2015 — At the recent 2015 IEEE Broadcast Symposium, Thomas Silliman, president of Electronics Research Inc. (ERI), was named the first-ever recipient of the Jules Cohen Award for Outstanding Broadcast Engineering. The Jules Cohen Award recognizes broadcast engineering work that is exceptional for its integrity and professionalism; quality and thoroughness; extent and reach; and commitment to client success. Also at the 2015 Symposium, the IEEE BTS presented the Matti S. Siukola Memorial Award to David Layer, senior director of advanced engineering for the National Association of Broadcasters (NAB), for the best paper presented at the previous year’s IEEE Broadcast Symposium. His winning paper is titled “All Digital Radio AM Field Test Project.”

“The Jules Cohen Award is the highest recognition the IEEE BTS can bestow upon a member, and it’s a hallmark of achievement in broadcast engineering. Tom is well-deserving of this honor, not only as one of the industry’s leading experts in broadcast antennas, towers, and filters for radio and television, but also as an IEEE Fellow and a member of IEEE BTS for more than 44 years,” said William T. Hayes, director of engineering and technology, Iowa Public Television, and president of the IEEE Broadcast Technology Society. “We also extend heartfelt congratulations to David, whose paper was deemed superior in a very tough field based on its overall technical quality, extent of original work, effectiveness of presentation, and quality of visual aids.”

Silliman began his career as director of engineering at ERI following his graduation with honors from Cornell University, where he received bachelor’s and master’s degrees in electrical engineering. A Registered Professional Engineer in Indiana, Maryland, and Minnesota, Silliman served two terms as president of the Association of Federal Communications Consulting Engineers and is the 2008 recipient of the NAB Engineering Award. He is currently secretary of the IEEE BTS and sits on the board of Tri-State Public Radio and TV in Evansville, Indiana.

In his role at NAB Labs, Layer coordinates the activities of the NAB Radio Technology Committee. He specializes in technical standards-setting and the development of the regulatory framework for terrestrial digital broadcasting technologies in the U.S. He is an author, contributing author, or editor for numerous technical publications including “IEEE Spectrum,” a leading journal of the electrical engineering profession; the “McGraw-Hill Yearbook of Science and Technology”; and the “NAB Engineering Handbook, 10th Edition.” Layer holds a bachelor’s degree in electrical engineering from the University of Maryland, College Park, and a master’s degree in electrical engineering from Purdue University.

The Siukola Award was established in 1982 to honor Dr. Matti Siukola, an eminent broadcast antenna engineer for more than 30 years who was stricken with a fatal heart attack as he completed his presentation at the 1980 IEEE Broadcast Symposium.

Additional information about the IEEE BTS, including membership, is available at bts.ieee.org/.

About IEEE BTS
The IEEE Broadcast Technology Society (BTS) is a technical society and council dedicated toward advancing electrical and electronic engineering by maintaining scientific and technical standards, as well as educating its members through various meetings, presentations, events, conferences, and training programs. IEEE BTS has more than 2,000 members and chapters worldwide and has its own business office located in Piscataway, New Jersey.