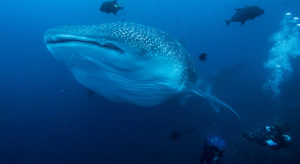 Fremont, CA – September 27, 2018 – Blackmagic Design today announced that Director Michael Muller used 18 Micro Studio Camera 4Ks as part of two custom built virtual reality (VR) rigs to film “Into the Now,” an underwater VR documentary, which is the first in a series of films about marine life and the challenges facing our oceans today.

Told through Muller’s personal journey of overcoming his fear of sharks, the film touches on the pressing issues that our oceans face, such as climate change, pollution and overfishing, while also serving as an educational tool for viewers to experience the oceans firsthand through VR. Produced by RSA VR and Vanishing Oceans, LLC, the film premiered at the 2018 Tribeca Film Festival and was screened at the 2018 Cannes Film Festival and the Sandbox Immersive Festival, part of the 2018 Qingdao International VR Week.

The film is also part of an ongoing research project with Stanford University’s Neurology department on the benefits of VR for people with PTSD, anxiety and other stress disorders. Muller and Andrew Huberman, head of Neurology at Stanford University, along with a team of five scientists from Stanford, initially shot a sizzle piece, which made Muller realize the need for a better quality camera system to make the kind of film he wanted.

“The challenge was that I only had two and a half months to raise funding to travel the world, and I needed a camera system that didn’t exist yet. Animals are migratory, so the clock was ticking,” said Muller. “I needed 4K resolution in a compact form factor, genlock and an interchangeable lens mount, among other things. Luckily, I met Casey Sapp and Matt DeJohn from VRTUL, and they built a solution: the VRTUL 1 rig using Blackmagic Design’s Micro Studio Camera 4Ks.”

San Diego based VRTUL (www.VRTUL.co) is a live action VR solutions and production company. Created and built in just eight weeks, each of the two VRTUL 1 rigs consisted of nine Micro Studio Camera 4Ks, along with a Mini Converter SDI Distribution, a Mini Converter Sync Generator and a Blackmagic 3G-SDI Shield for Arduino. The rigs were both used simultaneously and as primary and backup systems.

“The Micro Studio Camera 4K was the best solution for a few reasons,” explained Muller. “Genlock ensured that the cameras maintained perfect sync, especially since we arranged them in native stereoscopic 3D pairs. The form factor was also key, since the camera’s small size allowed us to mimic the average human interpupillary distance for a realistic 3D effect, with cameras rotated 90 degrees. Also, the 4K resolution in combination with our lens choice gave us the desired pixel density, so we could achieve a final stitch of up to 6K resolution. Finally, the 422 signal allowed us to capture a high quality ProRes file via an external recorder, which provided better color flexibility in post as compared to other VR cameras which rely on H.264 compression.”

The shoot took place over the course of a year and took Muller and his team all around the world. “I obviously could have kept going, and plan to at some point, but for this first series of films I had to limit it to the nine expeditions that targeted some of the coolest things to see in the oceans. From Africa to the Galapagos, we really crisscrossed the planet, filming pretty much back to back to get it done in time for a 2018 release,” he noted.

With 30 years of experience as a professional photographer, Muller has spent the past 15 years shooting animals in their natural environments, including 32 expeditions around the world to photograph sharks. “I realized that photos did not carry the power to show these animals the way people need to view them, and I thought a documentary film might be able to do what photography lacked in dimension and storytelling capabilities,” said Muller. “I want to inspire this new generation to get out and see nature and protect it. I want people to see just how amazing our planet is and that we still have time to save it. People protect what they love, and I want to find ways to help people fall in love with our oceans in ways they haven’t before.”

“Creating content in VR with a brand new camera system was a fun challenge, since we were trying to discover new ways of storytelling in a medium that has no roadmaps for how to do anything yet,” he concluded. “The Blackmagic Design components performed very well and shooting VR has allowed me to bring people along on these journeys, put them right in the center of the action and see our planet in a way they’ve never be able to until now.”

Michael Muller (www.mullerphoto.com) established himself as a top celebrity photographer and television commercial director before pursuing his passion to photograph marine life. In 2016, Taschen published Muller’s first book entitled Sharks, which captures sharks on film using the most powerful strobe in the world, on which Muller himself holds the patents. Muller emphasizes the necessity for more ocean protections using imagery to evoke awe, with GQ Magazine praising his portrayal of sharks “in all their sleek, gnashy, surreally beautiful glory.” “Into the Now” is Muller’s first film shot in VR. He is joined by creative studio Here Be Dragons to produce the rest of the films in the series, among other projects. To learn more about Muller and “Into the Now,” check out Instagram @michaelmuller7 and @intothenowVR