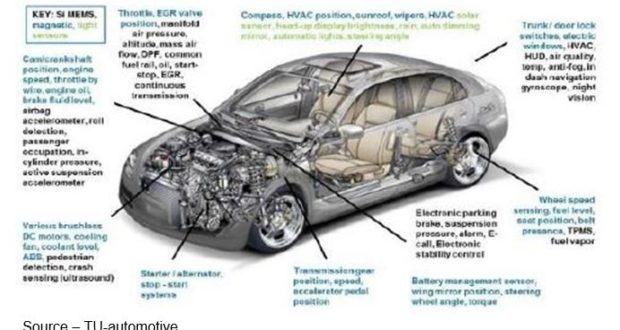 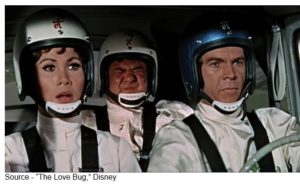 “Well, there’s nothing essentially wrong with the car. It’s just that it wants to go one way and I’d like to go the other.” – Jim Douglas, “The Love Bug,” Disney, 1968

While most of the folks who attend FMS (Flash Memory Summit) like to talk (brag) about their storage advances, we’re more interested in how the stuff is being used.

Sure, you have it in your computer, smartphone and other devices; but increasingly, every auto/tier 1 and chip firm has an outpost here in Silicon Valley trying to figure out how they can cram more and more technology into your vehicle so you have to do less and less.

They’re pushing hard because the faster we can get to a ZE/AV (zero emissions/autonomous vehicle), the sooner we’ll be able to reduce a major source of pollution and maybe help the environment … a little.

In addition, we’ll be able to dramatically reduce the daily carnage on the globe’s streets, highways, byways.

Traffic Epidemic – Vehicular deaths and injuries are experienced in every country of the globe and the vehicle industry/governments are working to reduce the numbers dramatically.

But according to Alan Messer, one of the session moderators and CEO of InnovationShift, the autonomous solutions to solve these are going to come gradually in waves, starting with simple shuttles and Robotaxis. 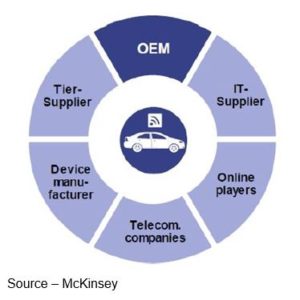 Combined Effort – It’s no longer firms selling components to Tier 1 providers or direct to auto manufacturers for use in vehicles; it’s increasingly a team effort with everyone involved having to provide inputs and modifications to deliver a solution for the consumer.

The task of developing an autonomous vehicle is increasingly a team effort of auto/tier 1 firms and technology firms.

“Even for the geographically limited Robotaxi market, OEMs have found it takes more to produce a solution that drives at least as good as a human. The result is that several of those programs’ pilots for driverless have been postponed for the last year.” Messer commented.  “even when Robotaxi pilots go driverless, it will likely be years before we see them in most of the major cities.”

“It has been harder, slower, more costly than they originally thought,” he added.

To amplify the challenge, he cited two recent opposing studies by DriversEd.com and J.D. Power:

Panelists from Daimler, Harman,  ARM, Intel, IBM, ATP, Cypress and other hardware/service providers agreed.  They emphasized that it is important to have consumers on the same road and heading in the same direction.

Everyone in the industry is working to inform and educate consumers while addressing the growing task of delivering the autonomous vehicle. 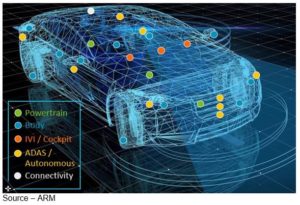 Data Sources – Autonomous vehicles don’t require a few or even a dozen processors or sensors to capture information for safe operation.  It’s estimated that 60 percent of the cost of tomorrow’s vehicle will be for its electronics.

To control and monitor all of the vehicle’s systems ARM, Intel, Nvidia and other processor manufacturers are working closely with auto manufacturers and their partners to capture and process data from every system in the car and surrounding environment.

ARM’s Neil Werdmuller noted that the automotive systems have to have sensors/processors and storage that will heterogeneously capture, compute, store, transmit and act upon data.

It sounds simple enough until he tells you that a Boeing 787 operates on about 14M lines of code, but a Level 5 AV will require at least 1B lines of code to safely and reliably deal with its moving environment.

Bye Bye Button – The dizzying array of dials, switches and buttons on the dashboard are being replaced with tap, swipe screens and voice control to make it easier and safer for the driver.

The data is constantly processed and presented to the car’s driver/passengers through the vehicle’s infotainment system in the form of clear, concise displays; touch, speech, gesture input devices; player/radio user content presentation and more–all with ultrafast update cycles.

Harman’s Ivan Ivanov and Daimler’s Michael Hounker noted that many of the vehicle and Tier 1 manufacturers prefer to have embedded systems instead of Google or Apple so they can exercise complete control and guarantee the systems’ operation and performance.

Ivanov emphasized that it is possible for smartphones to become part of the infotainment systems. Samsung’s Dex technology is a good example.  But he is quick to add that auto manufacturers prefer embedded systems to smartphone technology.

Auto manufacturers are already incorporating connectivity and telemetric systems and he believes most vehicles will be delivered with embedded system control.

“No auto manufacturer wants the consumer to make a car choice based on her or his smartphone,” Ivanov said.

“At the same time, they want to minimize distractions while the person is in the car while enabling them to take advantage of all of the vehicle’s navigation, communication and entertainment and ADAS/autonomous functionalities are delivered,” he added.

Ivanov noted that countless studies have shown that people use their phones in the car. The goal is to allow them to use the devices in a safer fashion.

Manufacturers also want and need an open system that can be quickly, easily and reliably updated. 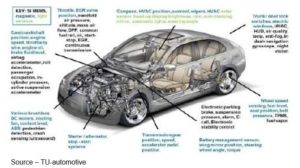 Not Just You – To jump start the AV movement, companies are focused on adding AI and autonomous features to vehicles, which has worked well to date.   Now it is time to incorporate the complete driving environment, recognizing that there are other vehicles and people on the roads/streets.

Tesla, Google, and others have historically been racing for years to build the first viable autonomous vehicle capable of navigating all environments without the input of a human driver.

Their primary approach has been onboard computers and radar to scan the environment around the vehicle and decide a car’s next movement based on the information.

Their approach has been an integral part of the tech industry’s DNA … move fast, break things, move on.

Greg Basich, associate director at market research firm Strategy Analytics, noted that back in early 2018, many in the auto industry were more optimistic, believing that within the next few years engineers would solve the most vexing problems related to enabling vehicles to drive autonomously in a wide range of on-road situations and conditions. They were more confident that there would be a significant number of self-driving cars shuttling people around by the middle of this decade or not long after.

“They were overly optimistic,” Basich commented. “They believed that by adding more sensors, more powerful processors, memory, and advanced software that they could achieve their near-term objectives.”

He recalled the self-driving Uber car in Tempe, AZ, being tested by Uber that hit and killed a woman walking a bicycle across a street last year.

Elsewhere, four Tesla drivers (as of May, 2019) died in crashes that occurred while the company’s Autopilot driver-assistance system was engaged. 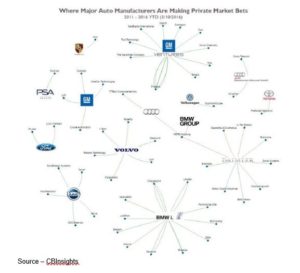 Joining Forces – Start-ups, specialties, tier one, technology and automotive manufacturers are developing deep relationships across organizational boundaries, including investments and outright acquisition, to get a head start on gaining AV marketshare.

Today, many are more inclined to follow the auto industry’s more holistic, cautious and total ecosystem approach of standardizing on safety and competing on everything else. 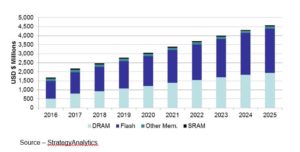 Storing Stuff – Most of the data captured by the AV’s sensors will stay in the vehicle or be used and discarded, while critical data will be stored onboard as well as sent to cloud storage for authorized use.

Basich noted that all of the participants (auto manufacturers, Tier 1 providers and processor/storage providers) are focused on determining how much data must be captured and used/stored in the vehicle, what can be discarded and what data needs to be uploaded, analyzed, and used by other parts of the transportation environment.

Last year a combined 2M autonomous miles in California – one of the largest testbeds – were logged. 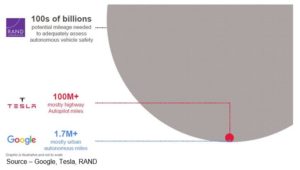 Safe Miles – AV developers and manufacturers are investing a lot of time and effort to ensure that when AVs are delivered to consumers, they will be safe for everyone.   That requires millions of roadway miles; and even then, they will not be 100 percent perfect because stuff happens.

But miles alone aren’t worth much because they also need quality.  There is a very low probability of such lethal events as discussed earlier, but it will still require auto manufacturers and autonomous service providers to conduct millions of miles of real-world testing with a large number of vehicles in a wide range of environments and encounters.

“In addition,” Messer added, “every time a major software update is required, the benchmarking will need to consider if they should begin anew.”

Alternatively, the auto industry is taking pages from the aviation and nuclear industries by breaking the task into component parts, developing safe systems and validating them through tight testing loops with software simulation, hardware validation and then real-world testing.

Soon, Soon – While auto manufacturers and some financial analysts would like us to believe that widespread sale/use of autonomous vehicles is just around the corner, most sensible people say they will appear slowly over the next few years and won’t be an integral part of people’s/goods’ driving solution until 2030 – 2050.

Translation?  It’s going to keep a lot of engineers employed for years to come.

But some day, in the distant future, your kids’ kids are going to ask which came first the EV or AV – electric vehicle or autonomous vehicle. 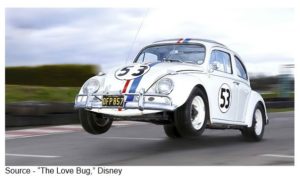 Then Messer, Basich, the AV session executives and FMS attendees will tell Jim Douglas that it’s a standard, not a fluke, in response to his comment that, “They make ten thousand cars, they make them exactly the same way, and one or two of ’em turn out to be something special. Nobody knows why.”