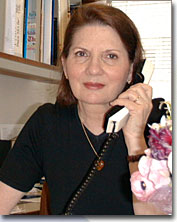 NEW YORK, NY (August 25, 2014) – It is with great sadness that we report that Paula Herman, co-founder of Herman Associates and Herman & Almonte Public Relations and a 40 year veteran of the advertising, marketing and public relations industries, has passed away following a nearly two year battle with cancer.

Paula began her career in advertising at J. Walter Thompson, where she was one of the first women to hold an executive position in the industry.  She moved on to the Girl Scouts of America, where she was appointed Graphic Design Director.  She also served as a panelist for organizations such as the Insurance Marketing Communications Association and Women in Communications, Inc.  As CEO of Herman Associates, she was one of the first women to found a business in the field.  Her clients included Christie, the United States Tour Operators Association (USTOA), The Chubb Group, and Big Brothers Big Sisters of NYC.  Representing Christie, her firm led public relations strategies as Christie revolutionized the exhibition industry and movie-going experience with the introduction of digital cinema.

A graduate of Pratt Institute, Paula served for over 10 years as an adjunct professor at Ecole Francaise Attaches de Presse (EFAP)–New York, the US branch of the renowned international school of advertising, marketing and public relations headquartered in Paris.

A fund in Paula’s name has been established at Memorial Sloan Kettering to support research into finding a cure for her type of cancer. Donations to that fund can be made online using this personalized link: mskcc.convio.net/goto/PaulaHerman or by mail to: Memorial Sloan Kettering Cancer Center, Amanda Gilstein, 633 3rd Avenue, 28th Floor, New York, NY 10017. Please indicate that the gift is in tribute to Paula Herman.

Paula is survived by her husband and agency co-founder Stu Herman, and her daughters Erica and Dana.