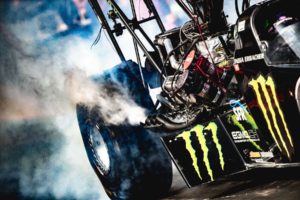 Originally from the Swiss city of Basel, Jndia is a stereotype-busting 24-year-old known as “the fastest woman in Switzerland.” In Jndia, The Fast Life, viewers ride along on her journey to fulfill her dream of becoming the fastest female drag-car racer in Europe, and ultimately the fastest in the world. Her car, a Nitromethane-fed dragster, can reach speeds over 300mph (480km/h) and cover a quarter of a mile of asphalt (0.4km) in seconds. Erbacher’s speed levels are so intense that it takes two parachutes to bring her car to a stop.

“Through our partnership with Monster Energy, we have had the good fortune to identify exceptional emerging talent. Jnida Erbacher is another outstanding example. Her story is as contemporary as it is compelling, and with the incredible adrenaline-producing racing and exotic locations, which are all the more engaging in stunning 4K UHD, this is perhaps our most exciting co-production to date.,” said Frank le Mair, Executive Producer, Insight TV.

“I’m really excited for people to see this documentary because it is an authentic representation of what it’s like to be a young woman in the world of drag racing – a traditionally male dominated sport,” said Jndia Erbacher. “The show looks at how I train, race and recover, and viewers will see the challenges that I face every day in order to be at the very top of my game.”

This is not the first time Monster and Insight TV have partnered on epic motorsports content. The two companies co-produced Road to Gymkhana Grid, following YouTube mega star Ken Block’s own yearly drift race event, and Morbidelli Rising, which chronicles the first racing season of Valentino Rossi’s now-famous apprentice Franco Morbidelli. Other Insight TV/Monster projects include the short film series on top athletes overcoming challenging obstacles to achieve stunning success in Born To, and Dangers of DarkFest, which documents the world’s best freestyle mountain bikers in an epic race on the southern tip of Africa.