Whenever two or more broadcasters get together, the topic of discussion inevitably turns to IP-based studio facilities. It seems like the whole industry is “talking IP” these days, and everyone falls into one of two camps: 1) those who already have it, and 2) those who are planning for it.

AoIP (Audio over IP) is flexible: once analog or digital audio (and control signals) are converted to packets of data, they can be sent nearly anywhere – across the building, across the campus, across the world. And it saves money: AoIP networks use the same low cost, off-the-shelf Ethernet switches as computer networks. Because of this, IP backbones are now nearly standard for new radio facilities — and, increasingly, TV as well.

Change For The Better
Once that new AoIP network is in place, you’ll find plenty of ways that IP impacts your daily operations and workflows. Some of the benefits and improvements you’ll find:

Easily scalable. IP networks are inherently scalable. Need to add another studio, newsroom, production workstation to your network? No expensive cable bundles like in the old days; a single Ethernet cable is all that’s needed.

Unified infrastructure. No more worrying about which wiring carries what: in the AoIP studio, since you use the same cabling for general-purpose data, control, audio and even video.

Digital everywhere. Because the audio carried over AoIP systems is computer data, programming stays digital from beginning to end. And it can be synchronized with other information, such as the metadata needed for Visual Radio, HD Radio or web-streaming channels.

Easy signal monitoring. AoIP networks make troubleshooting easier, because you use the same tools IT professionalsuse on data networks. And networked PCs play network audio streams as well as generating them, so any PC can be used to monitor or check audio presence of any signal at any time.

Tight integration. Video systems are steadily moving to IP platforms, and the powerful modern processing and mixing engines used in radio are already able to de-embed and play audio from SDI and MADI streams – even multichannel where required. Likewise, content created on the Radio side of the facility is instantly available to the TV side – a real boon for news-intensive broadcasters. Now that we know how easy, cost-effective and flexible AoIP is, let’s examine how it works in the studio.

IP On The Air
In the early days of IP, audio sources like delivery systems, audio recorders, codecs, satellite receivers and phone systems still delivered their audio output in analog or AES/EBU digital formats, which had to be converted before they could be used in a station’s AoIP network. This was accomplished with “audio nodes”, edge devices that turned standard audio into packetized AoIP streams.

Today, this task is much simpler. Modern AoIP mixing consoles are actually just surfaces that control sophisticated mixing engines — devices that can accept analog, digital, SDI, MADI and networked AES67 AoIP signals natively, without prior conversion. The newest of these engines can handle hundreds of channels of audio I/O, making the old “node” architecture nearly obsolete.

Even better, many devices used on the air have AoIP connections built right in. This makes studio engineers very happy, because a single connection to the console engine is all that’s needed to put a new phone system or codec on the air. A far cry from the bundle of cables needed in the old days! 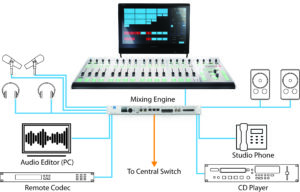 The diagram shows a typical AoIP radio studio. Sophisticated consoles often have touchscreen interfaces that help talent perform tasks like audio routing, mic processing and console show changes more easily. The mixing console and its engine ingest sources such as microphones, phones and PC playout systems, which are also available to other studios by way of a connection to the facility’s central Ethernet switch.

The reverse is also possible: devices like satellite receivers, remote codecs and VoIP telephone systems that connect directly to the network switch are available to studios and workstations plant-wide via the IP network.

Another benefit of the audio-data convergence is that the network not only allows instant studio-to-studio audio file, but can also access the Internet, giving your people access to online audio, news feeds, social channels and other tools via the same PCs they use to produce your station’s content.

You can already imagine how IP will affect your station’s day-to-day operations for the better. Let’s take a look at a specific example: the 2018 NAB Podcast Studio, designed and operated by Broadcast Beat.

Sidebar: AoIP Standards & Why They Matter
Back in the day when AoIP was shiny-new, there was no established protocol for sending audio over IP links, so manufacturers invented their own. Nearly every major company had their own flavor of AoIP. Which worked great — until you wanted to use equipment from another vendor. Sorry; game over.

The solution to this dilemma was to craft a standard for AoIP, so that diverse brands of equipment could exchange audio regardless of who made the gear. That standard, ratified by a large group of broadcast technologists and manufacturers, is called AES67.

AES67 gives radio broadcasters a real roadmap for connecting IP equipment from different manufacturers, and most have added it to their products. But be careful: compatible is different from compliant. When choosing an AoIP system, insist on 100% AES67-compliance — so you can be sure your future-proof AoIP network really is ready for the future.

AoIP At NAB
At the 2018 NAB Show in Las Vegas, Broadcast Beat (producer of the popular “NAB Show LIVE” video channel) added a second outlet: the NAB Podcast Studio, a fully-equipped radio studio that produced product and technology news in podcast form for the duration of the show. Since the studio was to be the visible avatar of radio’s state-of-the-art, Broadcast Beat Founder and Editor-In-Chief Ryan Salazar insisted on AoIP.

“We had a wide variety of broadcast equipment placed in multiple locations, so first and foremost we wanted to build the Podcast Studio with IP for ease of construction and operation,” says Salazar. “AoIP really reduces cabling. You only need one Ethernet link to get multiple channels of audio between locations, and back in the equipment room, connection is so easy – no cable bundles or worrying about whether audio is balanced or unbalanced; you just plug your devices into the network switch.”

Audio quality improves with AoIP too, says Salazar. “AoIP doesn’t suffer from RF interference and ground loop hum like analog audio does. Once the audio has been converted to data, it’s immune to all of that stuff. As a result, our audio sounded much better than even the cleanest all-analog setup could have.” 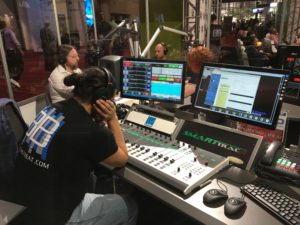 The Podcast Studio utilized equipment typical of most radio on-air studios. “We had a Lawo Crystal console and Compact Engine, four Rode NT1 microphones, monitor speakers, Adobe Audition and an ENCO DADPro system for recording and playback. All of the analog gear, like the mics, headphones and monitors, plugged into the mixing engine and became AoIP signals, interconnected with all the native AoIP equipment. It was very easy to set up because the engine handled all of the conversions and audio routing for IFB and other talent cueing.”

AoIP proved its flexibility again when it came time to interconnect the Podcast Studio with the master control room for the NAB Show LIVE telecast. “About 95% of the TV MCR was IP,” says Ryan. “This made it really easy to integrate the audio and video parts of our productions. For instance, there were webcams for NDI streaming in the podcast studio. We used a Lawo RƎLAY touchscreen virtual mixer in the MCR to route IFB to and from the podcast studio over a digital snake, so we could toss between the studio and our live stage. The streaming platform also received audio from the RƎLAY computer.”

In Ryan’s opinion, Broadcast Beat’s NAB workflow was much improved over previous years due to the studios’ IP backbone. “First, there was a lot less cabling than before! Once you go IP, you’re in the virtual world. Operationally, things work the same as analog, but with more flexibility and capability. IP was the glue that brought the audio and video sides of our operations together. We had ENCO MOM software on the network handling the video automation, and we de-embedded SDI audio from the video feeds for audio mixing via IP. All we had to do was plug our gear into the network switch, which became the locus for everything. No worries about dedicated cables, signal routing or audio switching — IP really smoothed the workflow between the video and audio sides of our operations.”

To Sum It Up
IP networks are taking over broadcasting. Their cost savings, ease of installation and maintenance, flexibility and use of standards-based data transport makes IP the ideal backbone for radio and TV studios, now and in the future.