If you’re like me, you have been reading about Dolby Atmos and are asking yourself if you should invest in this evolving new surround audio technology. Sure, it can be expensive, but is it worth it — especially for a small facility? Will there by a payoff down the road?

It is a difficult decision. Stereo will surely be with us for a long, long time. But Dolby Atmos is slowly moving into the mainstream — now found in headphones, soundbars, computers and smartphones. You’ve probably heard it and admire the way it captures compelling 3D sound.

Beyond the complex technical knowledge needed to implement and understand it, what are the considerations (other than money!) to building a Dolby Atomos-capable editing facility? Let’s look at some of the basic considerations.

The first is speakers — lots of them. Dolby recommends a minimum of 11 speakers plus one for the low-frequency effects (LFE) channel (7.1.4 sound). LFE is a band-limited audio channel, usually a subwoofer, used for reproducing deep and intense low-frequency sounds in the 3–120 Hz frequency range. That’s the minimum for Dolby Atmos — systems can go up to 22 speakers. 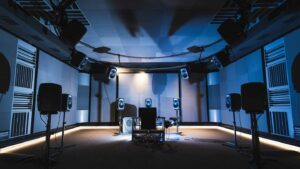 Clearly, with this number of speakers, a traditional Dolby Atmos system is not suitable for most small home or office studios. Experts estimate the optimal Atmos mix room is about 18 x 21-feet with a ten-foot-high ceiling. The absolute smallest is 10 x 11.5-feet with at least an eight-foot-high ceiling. These space specifications are estimated for optimal speaker configuration and sound dispersion.

Also, the space must be acoustically treated before you even begin. Then there is the issue of “tuning” the room for the speakers, which can be complex if you don’t know how. Speakers must be offset using delays and EQ. Figure in the cost of hiring a professional to do this work correctly.

The good news is one can still mix Dolby Atmos with a plug-in for headphones. This “Dolby Renderer” essentially creates a binaural version of a 3D mix. Using headphones is only a simulation and not a true representation of what audio will sound like through a 7.1.4 speaker system. But, so far, most people are not listening to a true Dolby Atmos mix at home on speakers. Most are using headphones.

This is why the Apple Music, Amazon and Tidal streaming music services support Dolby Atmos sound on smartphone devices. Most people are listening to these services via headphones

Some audio workstations integrate Dolby Atmos capability, but users may need to purchase additional hardware. There are three options for how to use the Dolby Renderer when mixing without speakers. 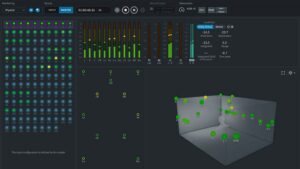 One is to purchase the Dolby Atmos Production Suite for Mac (PC not supported) which has integration for Ableton Live, Apple Logic Pro, Avid Pro Tools, Blackmagic Design’s Resolve and Steinberg Nuendo.

The software runs on the same computer as the DAW, which means a greater load on the computer’s processor. There is a 30-day free trial to check if your hardware can handle the software. The price is $299.

A second option is to purchase the Dolby Atmos Mastering Suite and use it on a second computer. Your DAW runs on a separate computer. For this, the user will need a compatible Dante or MADI audio interface. The software comes bundled with approved hardware and can only be bought from Dolby dealers. The cost is more than $900.

A third option is to use the Dolby Atmos plugin in Logic Pro, which was introduced as a native plugin in 2021. If you’re already a Logic Pro user, your software can be updated for free to try it out at no extra cost. This option, however, won’t have the full functionality of the more expensive options. 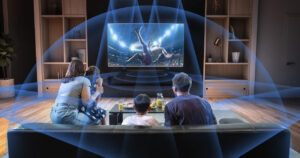 It is important for producers to know how their audience will listen to the finished work. With stereo, it is standard practice to test a mix by playing it on speakers, headphones and on a laptop. The idea is to create a mix that sounds good across a range of devices.

Dolby Atmos is more complex, since the mix will sound difference depending on the listening setup of the user. A 7.1.4 speaker system sounds different than a Dolby render for headphone. To check a mix thoroughly, you have to play it on a variety of devices.

One way is to create the audio mix in your own Dolby Atomos edit room, and then see how it translates at other known Atmos spaces. This cooperative testing is good for all parties and will reveal problems.

It requires extra time to test mixes through different devices. And even then, there is no guarantee the listening experience will be consistent.

Distribution is also currently problematic, especially for music. Spotify doesn’t yet fully support Dolby Atmos, while Apple Music, Amazon and Tidal does support it on certain devices. Yes, it’s still a minefield of confusion out there of incompatible services and devices. 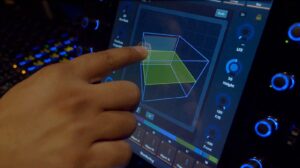 By now, you’ve probably guessed that adoption of Dolby Atmos is in its early days. If more people adopt the Dolby 3D format in listening devices, many of these issues will be resolved. That is if Dolby Atomos actually takes off.

Remember, multi-channel sound has failed in the past. Jac Holzman, one of early promoters of the quad sound movement in the late 1960s, said one of the reasons the four-channel format failed is women didn’t want four speakers and all the associated gear cluttering their living rooms.

For that very reason, companies are now developing single soundbars that deliver Dolby Atmos without a large number of speakers positioned around the room. Whether this latest surround sound technology will capture the mass market is still open to question.

For owners of small studios, installing a full Dolby Atmos system is probably unrealistic, both from a size and cost standpoint. Using a Dolby Renderer, is more affordable and allows a producer to get his or her feet wet in the technology.

But with this comes a big learning curve. Dolby Atmos 3D audio is very different from stereo. Users need to be grounded in the basics of audio recording and then learn and experiment with the new format. It will take time — both for the recordist and the audience.