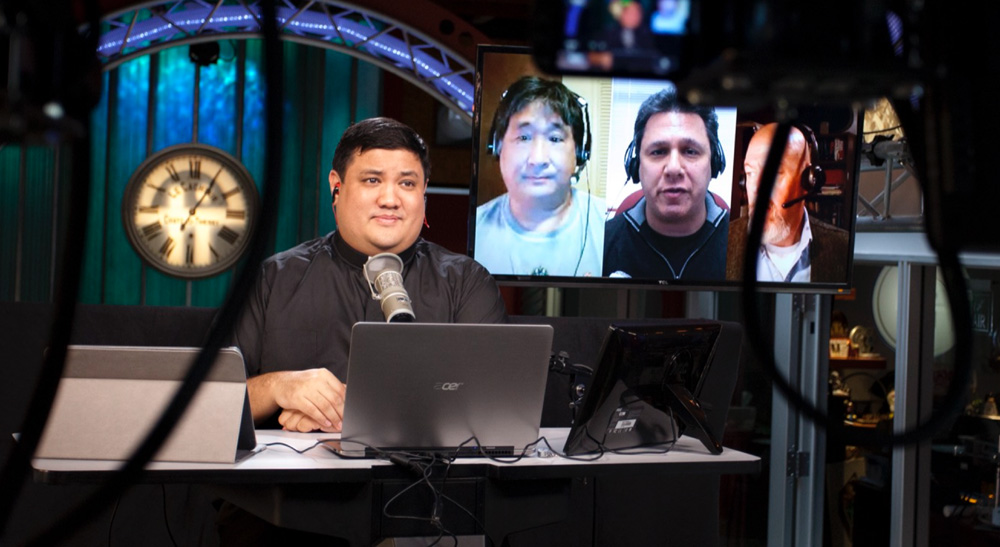 Fremont, CA – September 2, 2021 – Blackmagic Design today announced that the Jesuit Curia in Rome has modernized its external communications with a live streaming workflow built around the ATEM Mini range of live production switchers.

The Jesuit Curia, the worldwide headquarters of the Society of Jesus, is a Catholic religious order that promotes faith, justice and ecumenical dialog.

Fr. Robert Ballecer SJ was responsible for developing the workflow and realized that an inhouse content production studio would be a decisive breakthrough in evolving the movement’s communication channels without changing its DNA.

“We wanted a high capability studio, but did not have the budget to build a facility that could compete with Hollywood,” he explains. “So, then my thoughts turned to the ATEM Mini switchers, which I was already familiar with, and I considered how I could integrate their production quality into our workflow.”

Also known as the Digital Jesuit, Fr. Ballecer has designed three standalone spaces for voiceovers, podcasting, and a greenscreen room. The ATEM Mini Pro has been key to helping the Jesuit Curia raise the bar according to Fr. Ballecer SJ.

“My approach was to show what could be done on a limited budget and then slowly scale up from there. But it was our first switcher that enabled rapid growth” he explains. “From simplifying our broadcasts to upping the quality of our video conferences, the quality of our studio work has increased and that has led to more demand internally for additional resources and capabilities.”

He adds: “Our Superior General was so impressed by the real time chroma keying, that he approved a modification of our studio to do primarily greenscreen work,” explains Fr. Ballecer SJ

All live content is produced and streamed in HD. Meanwhile, any prerecorded videos are filmed and edited in 4K.

The Jesuit Curia shoots on a mix of mirrorless and PTZ cameras, and each space has a Blackmagic Video Assist 7” 3G for color and framing. “We use the Heil PR 40 microphone for recording podcasts and Audio Technica microphones for sitdowns.”

The studios have produced more than 500 videos, such as prerecorded and snap messages, interviews, webinars, live events, episode narratives about the Society of Jesus, and wider, non religious content, including tech podcasts.

Content is disseminated through various channels, including YouTube, Twitch and Telegram, whilst also being syndicated to national and international broadcasters such as the BBC and MPR News.

Despite the reluctance of secular communities to embrace new technologies, Arturo Sosa, the Superior General of the Society of Jesus, has shown a unique approach to video and streaming. “Instinctively, he quickly recognized the potential, and his daily schedule now includes broadcasts, interactive webinars, and prerecorded messages.”

Due to the studios’ success, expansion is already planned by the Jesuit Curia, with ATEM Mini providing the framework.

“Thanks to the ATEM Mini, we have transformed the Jesuit Curia communication capabilities. What once would have required thousands of dollars in investment and a large production team, now only requires four Jesuits with a prosumer level understanding of technology,” reflects Fr. Ballecer SJ.

“I doubt we will ever go back to the Jesuit Curia’s old way of communicating, after we have been giving a taste of what we can do,” Fr. Ballecer concludes. “The streaming workflow has been a game changer in how we spread our message to the world in an accessible, insightful and engaging way.”