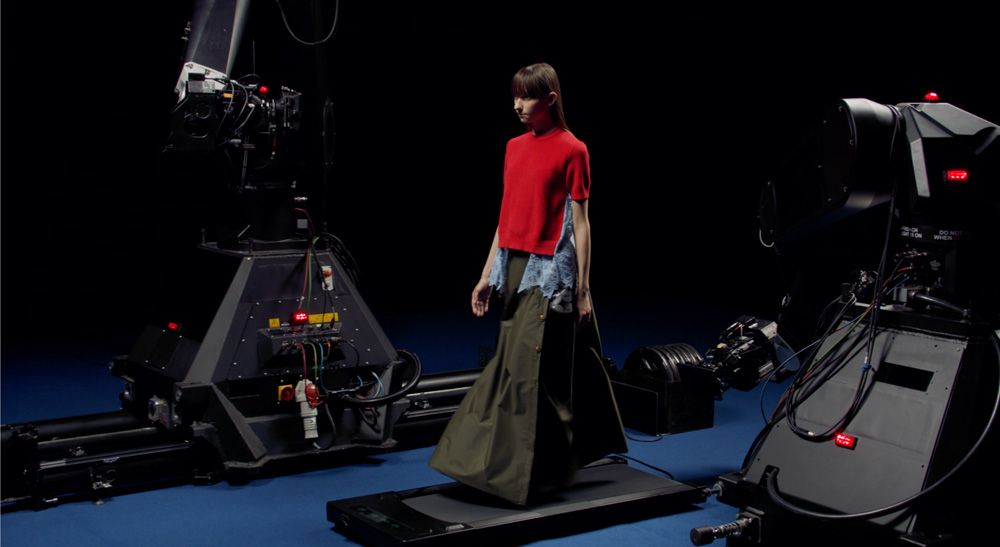 Kazunali Tajima has long been at the forefront of the world of fashion and advertising photography, TV commercials and music videos. He recently shot a collection movie for the fashion brand kolor, directed by Yusuke Tanaka with music composed by Ichiro Yamaguchi from popular band, Sakanaction. The film was produced for this year’s Paris Fashion Week, which was held online due to quarantine, and was a hard to shoot and visually unique piece showing models walking on treadmills in between moving robotic arms.

Three URSA Mini Pro 4.6K G2s were attached to the robot arms to film the models walking on a treadmill, while Tajima filmed the set up from further away with another URSA Mini Pro 4.6K. Through the combination of all of the elements in each scene, Tajima was looking to give a bigger impact to the audience.

Tajima used two URSA Mini Pro 4.6K G2s with Angenieux Optimo 12x zoom lens for the wide shots, one as a fixed camera and the other on a dolly, using ARRI MACRO 40mm lenses for all the robot arms. “By using older, more tasteful lenses, I avoided making the images look too video like.”

Tajima continued. “We wanted to recreate a fashion show to some extent, but it would be too much work to have the robot follow a walking model. I knew we should let models walk to show the details of the clothes, so we came up the idea of using the treadmill. To keep the audience engaged till the end of the movie, the robot arms’ movement was programmed in two different ways, and I moved my camera on the dolly.”

Tajima had already used Blackmagic cameras in the past for shooting music videos and short films. “We chose the URSA Mini Pro 4.6K G2 because it’s an affordable camera that offers good quality and can shoot in RAW.”

He continued: “In this movie, we had a black background on the set and a model was softly lit against the background. So it was important to have latitude that could preserve the details in the shadows and highlights. Of course, we adjusted the lighting so that it could be preserved, but the final result would not be what we wanted unless the camera had a good tonal range.”

The film was edited by the director and graded by Tajima using DaVinci Resolve Studio. “I’ve been using DaVinci Resolve for about five years now. Since I aimed to show the details of the clothes, I didn’t do any extreme color adjustments. I added contrast and blue tint in the shadows and brought down the highlights a little bit. I used very light grading, so I finished it very quickly.”