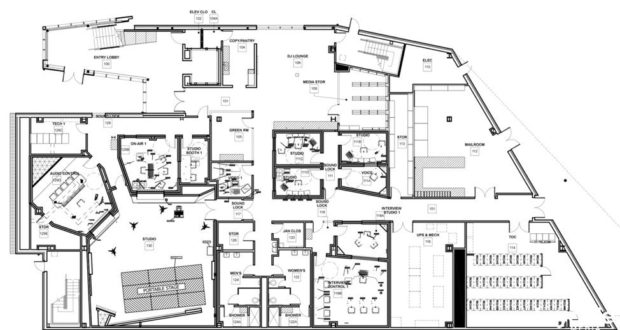 KCRW recently relocated from the basement of a building on the Santa Monica College main campus, to a new state-of-the-art $38-million headquarters at Santa Monica College’s new Center for Media and Design. This new facility is a culmination of 11 years of fundraising, designing, installing, integrating, and training by KCRW staff and the partners involved in the project. At the heart of the design was a $6 million dollar upgraded radio and broadcast infrastructure built to increase collaboration and provide staff the necessary equipment to bring their station into the digital age.

At the heart of the project, was VP of Technology at Key Code Media, Edward Locke. Ed and his team of engineers designed all audio-visual and media equipment necessary to satisfy the scope of the project. Each audio console, microphone, satellite transmitter, control room, server, and the studio had to be carefully thought out, ensuring adequate infrastructure was available in each room, that all systems were compatible, and each cable was defined.

“This was a massive project involving a system integrator that had deep knowledge of a large variety of broadcast, post-production, radio transmission, and audio-visual technology. Key Code Media was up for the challenge,” commented Ed Locke. 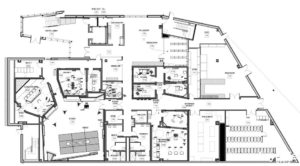 Drawing of one of the three floors within the new KCRW radio station space. This floor alone has 10 on-air, interview, and production spaces used for music and news.

The preliminary technical design for the new KCRW radio station started in 2012, with Key Code Media winning the $6 million system integration project in 2014. However, it wasn’t until late-2017 that initial cabling and installation of broadcast and audio-visual equipment began. So, what took so long?

KCRW facility had been in their old facility for over 35-years it was time for a move. General contractors, architects, electricians, and system integrators worked in unison to make sure each piece of the puzzle got configured correctly. Early in the construction process, significant issues arose that ultimately brought construction to a halt, and subsequently continued to introduce ongoing challenges that slowed progress.

“Throughout the construction project, even during the general contractor dispute Key Code Media’s Ed Locke was onsite daily, assessing infrastructure, broadcast services boxes, and electrical conduit was installed properly. Any little mistake made by other contractors could have negatively impacted the network, the custom furniture design, and installation of equipment there was a lot at stake at every step of this project,” commented Steve Herbert.

Another challenge came from the delay in the project. Broadcast technology initially in the 2014 scope was discontinued by the time ordering began in 2017. Technology evolves quickly delay measured in ‘years’ creates unique challenges.

“60% of the equipment in the initial design has to be rescoped by the time of the commissioning and installation. With over 1,200 line items involved in this project each piece of equipment on the list needed to be proven in a connected workflow,“ Ed Locke mentioned with a chuckle.

Each of the 85+ KCRW employee workstations and audio consoles are networked for sharing and collaboration. The building has 25 studios spaces, including 2 On Air Control rooms, 3 Interview Room clusters, live Audio and Video control rooms, and over a dozen production rooms. Each room could be converted into a multipurpose space, using Audio Over IP (AoIP).

KCRW reporters and producers can all immediately access and manage any Pro Tools or Dalet project on the network from any room throughout the facility. This was a big transition.

“In the past, our on-air space was in one room. You would have our DJ ending a music set but then immediately rushed out so our news team could start their 11 am talk show. With this new facility, every room is an on-air studio after just a couple of clicks.”

There was, however, a problem during the AoIP setup- Avid Pro Tools running on Mac workstations were not natively compatible with the Axia Livewire AoIP network. Adding to the complexity, KCRW did not want to add a digital conversion step in their audio chain.

To address this concern, Key Code Media engineers worked with Axia and Ravenna to deploy a custom configuration that connected ProTools with up to 32 bi-direction audio channels over a single CAT6 cable. This not only enabled KCRW to ditch their legacy ProTools I/O, but it also expanded and enhanced overall workflow capabilities.

Of course, this is a radio station. Even with modern streaming, broadcasters still rely on line-of-sight microwave transmitters and calibrated satellite communications. On the roof of the new building, a crane crew was brought in to lift transmission equipment into the sky and get them aligned with transmitter sites and satellites.

“All the transmitters needed to have line-of-site to their sources or destinations. After all previous calculations were complete, we discovered that rooftop support equipment was installed on a platform that was two-feet higher than in the original drawings,” commented Ed.

After the roof height change discovery, the Key Code Media team, in collaboration with the building architect, carefully generated 3D models to visualize every piece of equipment. The optimal heights and angles were defined to obtain stable links while avoiding physical conflicts with other rooftop hardware. Understanding the critical nature of this equipment and the need for heavy equipment to be coordinated while classes were in session, there was no choice but get this right the first time. 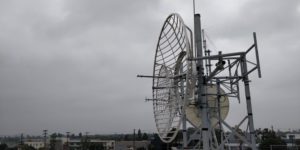 VIDEO AT A RADIO STATION

What is video equipment doing at the KCRW radio station? KCRW is a unique public radio station- providing news, music, and live performance programming. Morning Becomes Eclectic features live performances by a spectrum of well-known and local bands- including artist such as James Blake, Beck, Jungle, Hot Chip, and Leon Bridges. Each music act is streamed on the KCRW YouTube channel, which boasts an impressive 303K followers.

The station had to figure the best way to capture each live performance, with a tight video crew. The final setup 4k-capable Sony cameras mounted throughout the studio, connected to a video room supported by a Ross Carbonite for switching, Ross Expressions for graphics, Ross Inception for social media feeds, backed by a Ross Ultrix video router. All video content from the performances space is stored on a Studio Network Solutions EVO storage network, where it can be edited in Adobe Premiere Pro or Final Cut Pro by the KCRW marketing team.

The performance studio space also includes grid and floor lights and speakers, mounted PTZ cameras, and a balcony for visiting fans and donors to enjoy the live performances. 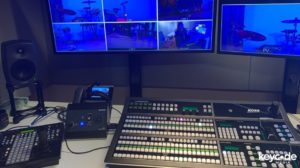 The backbone of all MBE music performances is a state-of-the-art audio control room backed by Pro Tools, an SSL C200 console, racks filled with audio processing equipment, Adam Audio speakers, and both MADI and Dante audio distribution. All the equipment in the room got wrapped in custom furniture to make the room feel like mission control for the USS Enterprise. 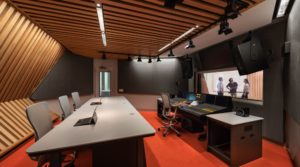 “We were out of space out at our old basement facility. Each inch was used for an On-air control room or desk space. There was no place to meet. With the new location, we have an open desk layout with several state-of-the-art conference rooms. The ability for us to have small-to-medium size meetings has greatly improved our ability to collaborate,” commented Steve.

Each conference room features a networked Crestron touch-screen system, audio systems, and a monitor. The KCRW team has the flexibility of inviting collaboratives to dial-in remotely and share their audio and screens via a zoom session. Each conference room is also in the Crestron network, allowing multiple rooms within the facility to be connected into a single meeting session. 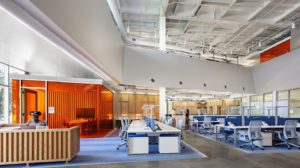 A KEY CODE MEDIA COLLABORATION – FROM START TO FINISH

After six years of design (plus, re-designs), installing hundreds of audio-visual, broadcast, and audio post-production products- it was time to bring the 120 staff members into the new office. 120 staff needed to be trained on new workflows, software, and hardware, such as Dalet Galaxy and ProTools. This training is in addition to the more than a dozen different systems that KCRW engineers needed to learn.

“This was a big technology shift for our facility, and it wouldn’t have been successful without properly training the staff on every feature within each tool. What’s great about Key Code Education, is that even after the onsite training day(s), we knew that we could pick up the phone and get questions answered quickly at any time. That’s not something you get from any manufacturer,” commented Steve.

Santa Monica Came to Key Code Media with a challenge,  to move their 35 year old out of their basement.
As part of an $11 million project,  KCRW, the premiere NPR radio outlet in Southern California was moved up from the basement into newly built facilities.   The scope of the several year project included full turn key design, engineering and integration services of  A large Production Studio and Television Control room, an Audio Control Room, an ADR Studio, Two Radio Control rooms, Three Production Booths, Four Voice over Booths,  Seven Edit Suites, Twenty-Eight Classrooms, Three Conference rooms, and a Hundred Eighty seat Auditorium.   Integration services include cabling,  installation, commissioning, training and an on-going support agreement.   This multi-discipline installation has included a wide range of equipment in Live, Post, Automation, and Audio.