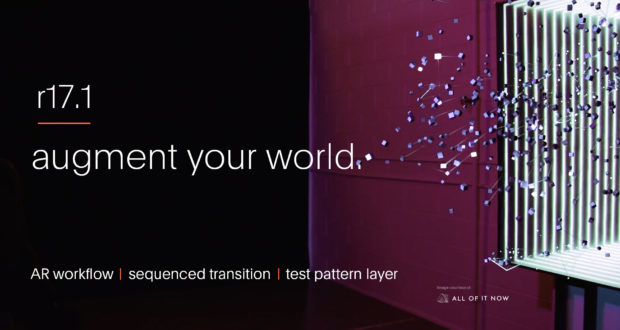 London, United Kingdom, 26 March 2020 — disguise, the solution specialist for creative and technical professionals to imagine, create and deliver the world’s most spectacular live experiences — today releases r17.1, an update to its award-winning software, coinciding with the launch of a six-month free licence for its Designer software.

Built with disguise’s community of artists and technicians at its heart, r17.1 dramatically enhances the augmented reality (AR) workflow so that its community can produce incredible experiences with ease. With the release, disguise also hopes to help creative studios and production houses access the market opportunity presented by AR with the solution for delivering spectacular and immersive visuals.

The significant workflow improvements introduced in r17.1 enhance the ease of use for specialists delivering AR experiences with disguise, making it a more compelling option for use in projects for broadcast, esports and live contexts such as corporate, education, virtual environments and concert touring. As viewing figures surge, it becomes increasingly important to have the right tools available to create AR easily and efficiently and elevate ‘at-home’ viewing with thrilling visuals.

The disguise solution provides full 3D simulation and camera planning tools that allow workflow specialists to pre-visualise and imagine every pixel of an AR experience ahead of time, communicate and collaborate with other teams, and respond to feedback at every stage of a production.

To date, disguise has already been used to power many major events, including the live broadcast of the Opening Ceremony of the Pakistan Super League, the longest ever accomplished duration of an AR-centered broadcast. AR was critical to the success of the broadcast and enhanced the experience for the 50 million viewers watching from home and around the world. With r17.1, disguise hopes to further enable its community to produce AR experiences.

As well as making it easier to create and deliver AR, the new disguise release also introduces a range of improvements to the software user experience.

With sequenced transitions, users can now effortlessly transition to anywhere on a timeline using black and white content to define the transition. The feature opens new visual possibilities and saves time previously spent sequencing by simplifying the approach.

The launch of r17.1 comes in a week when disguise has offered a free six month subscription promotion for its Designer software. This offer has been made to support the disguise and live events community at a time when it is key for creatives and designers to continue to create and prepare for live projects later in the year.

For more information, and to download r17.1 visit: download.disguise.one/