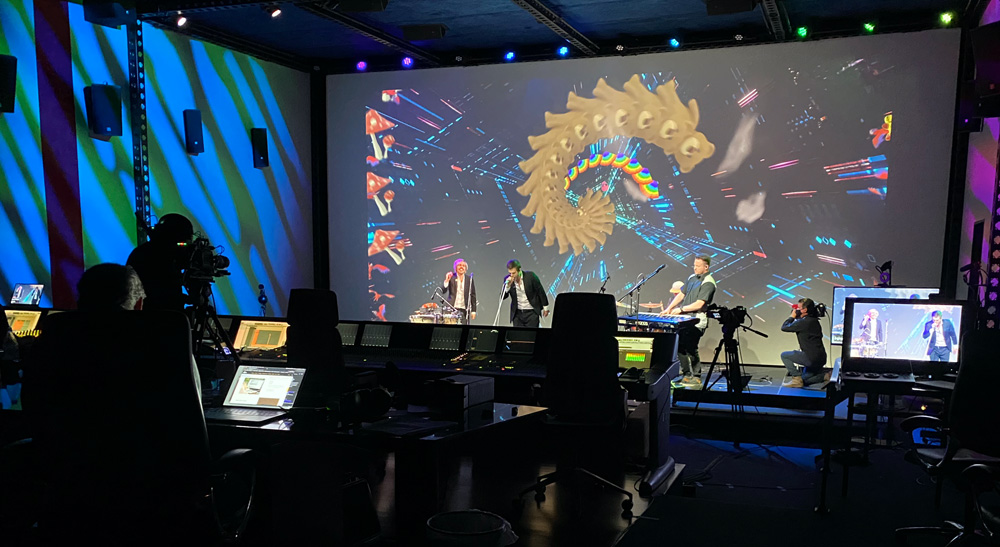 Laurel Canyon Live is located in Laurel Canyon, CA. Its President, John Ross, recently added large and small performance spaces powered by Blackmagic Design to his existing post production studio, Ross424 Inc., which also uses DaVinci Resolve Studio in its pipeline. Laurel Canyon Live can now live stream performances, and at the same time, handle post production and mixing as needed all in one place. Fans around the world will be able to experience unique, virtual concerts with incredibly high production value.

Behind the larger main stage, Ross installed a green screen complete with two Ultimatte 12 compositing processors and Ultimatte Smart Remote 4. Used in conjunction with Unreal Engine, the Ultimatte setup provides the team with quick navigation menus and keying control, so they can refine and adjust composites in real time during the live performances.

“We will create incredible, stunning graphics with Unreal Engine for the artists and make them come to life with Ultimatte 12,” Ross explained. “We can put the artists on a beautiful landscape or pre built virtual stage, whatever they choose. Being able to live stream is one thing but adding immersive background visuals will take the performances to another level.”

The main stage features six URSA Mini Pro 4.6K G2s connected to the machine room through Blackmagic Camera Fiber Converters and Blackmagic Studio Fiber Converters. In addition, eight Micro Studio Camera 4Ks are located throughout the space and on the ceiling for additional angles, some of which will be controlled by an ATEM Camera Control Panel. Everything will be live switched via an ATEM Constellation 8K and ATEM 4 M/E Advanced Panel.

“When an artist is performing, it’s crucial to capture different angles to convey emotion and draw the viewers in. We selected the cameras because of their incredible dynamic range, compact size and ability to be controlled remotely,” said Ross. “Our goal is for our crew members to maintain a healthy distance and still have full control of the gear. We want to be able to offer the artists a space where they can focus on their performances, and we can automate the production on our end but keep the performances very dynamic.”

Ross added, “We also selected the ATEM Constellation 8K because of the enormous power it offers and given that the whole 4K HDR chain is Blackmagic Design, there is a level of integration that just works in and out.”

On the post production side, Ross is using DaVinci Resolve Studio for color grading and editing as needed and installed numerous Teranex Mini SDI to HDMI 8K HDR advanced monitoring solutions to convert the feeds that come in as SDI to HDMI, as well as several Teranex AV standards converters for additional formats. All video enters and leaves Laurel Canyon Live’s computer system through several DeckLink 8K Pro capture and playback cards, including four Unreal Engine servers and ingest systems used to capture the discrete video feeds, such as images created in Unreal Engine, virtual audience members via Zoom and playback video content, that can be used to do quick edits and all offline work, all of which is done in Davinci Resolve Studio.

“When we do a show, sometimes we’ll have a small delay from being fully live. With DaVinci Resolve Studio, we plan to handle any color grading and editing, giving us the opportunity to make the viewing experience more impactful and take the show up a few notches,” Ross concluded. “We’re extremely excited to officially launch Laurel Canyon Live with Blackmagic Design as our backbone and for people to experience shows like they never have before.”