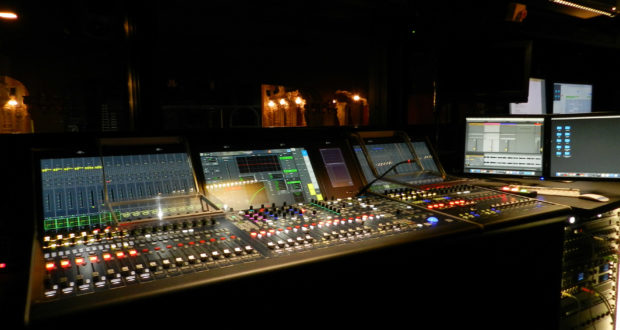 The Zurich Opera House upgrades both the sound control room and auditorium space with the highly advanced Lawo IP mc²56 mixing board for the 2017-2018 opera and theater season. The new Lawo mixing boards offer 48 faders in the control room along with a 32-fader console with a 16-fader extender which is connected to the hall console and 16-fader front of house. The central core has been expanded with Wave SoundGrid with Gold Bundle, with an additional Dante card. The capacity of the redundant routing card is 8192 x 8192 mono channels and the four DSP cards provide 192 DSP channels of processing, respectively. Both consoles can be operated standalone or in two person configurations where recordings can be activated and controlled from the sound room control room while the auditorium is utilized as the true sound reinforcement system.

Oleg Surgutschow, Head of the Zurich Opera House Sound Department, is very satisfied with his newly installed Lawo components, “I particularly appreciate the sound characteristics of the Lawo signal processing system,” he says. “The possibility of integrating the SoundGrid with Wave plugins makes it much easier for us to mix live. The almost unlimited possibilities of the router are also important for our long-term planning and further development.”

Also to note, the Zurich Opera House uses Wave Field Synthesis (WFS), were a total of 32 listening positions can be controlled via the Lawo IP consoles. The 3D Sound SSW (Spatial Sound Wave) from Fraunhofer IDMT integrates seamlessly as does the Surround and Spatial Acoustic Applications (Fraunhofer IDMT für Surround- und raumakustische Anwendungen) which currently enhances 88 channels of extended sweet spots auditorium-wide and is compatible with any loudspeaker setup.

For more information for the Lawo product lines that cover broadcast production, radio on-air or theater/live check out the company online at www.lawo.com. Lawo designs and manufactures pioneering network, control, audio and video technology for broadcast and post production, as well as live performance and theatrical applications. Products include control and monitoring systems, digital audio mixing consoles, routers, video processing tools as well as solutions for IP-based A/V infrastructures and routing systems. All products are developed in Germany and manufactured according to highest quality standards at the company’s headquarters in the Rhine valley town of Rastatt, Germany.