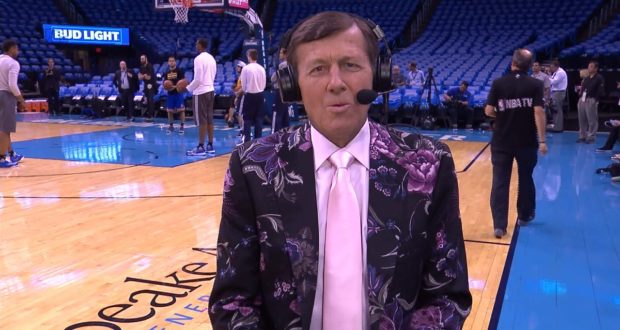 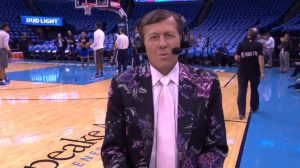 He was one of the most iconic and flamboyant television broadcasters in history. There are only a tiny handful of sports broadcasters who could stand any where near the enormous shadow he threw. Craig Sager, long at Turner Sports, passed on Thursday due to complications from myeloid leukemia. He was 65 years old and died just a few days after being elected to the Sports Broadcasting Hall of Fame.

His journalistic approach was unquestioned as he was the consummate reporter first and the flamboyant showman second. His wardrobe kept alive the 1970’s even before he began his Turner career. His wardrobe was well known and, while outrageous for the most part, was always brilliantly matched even as it was overstated.

He was Illinois born in 1951 and went to Northwestern University. While there, he began the flamboyance that would become his trademark as he performed as the university’s mascot, Willie the Wildcat. The wardrobe innovator headed for Tampa right out of Northwestern and applied at a Tampa television station to be the new weatherman. Before his interview, he hit a Goodwill store and bought a suit that was a gaudy yellow, blue and white. He got the job but his new bosses told him he had to lose the suit. Far too loud, they said, for a proper television broadcast. 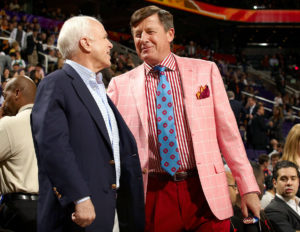 Head Coach for the NBA’s San Antonio Spurs, Greg Popovich, once remarked of Sager’s wardrobe that: “It’s not just the style. The color scheme is dangerous. You have to be very careful as you look at him. It can’t be too quick. It’s got to be slow so your eyes can adjust.”

By 1974, he was working sports and had headed to Atlanta to cover the baseball Braves. It was April of that year and Henry Aaron was closing in on the record for most home runs all time, 714, held by the beloved Babe Ruth. When Aaron crushed number 715 to break the record, 22 year old Craig, making a whopping $95 a week, was the first to reach him and drag him off and got a interview so famous that it sits in the Baseball Hall of Fame in Cooperstown, New York.

Ever the hustler and hard core reporter, even in his 20’s, he wasn’t going to miss out on getting a story during the 1977 Belmont Stakes horse race. Seattle Slew was poised to win racing’s Triple Crown that year with that Belmont win. The night before the race, Sager slept in a stall that was right next to Seattle Slew’s stall. 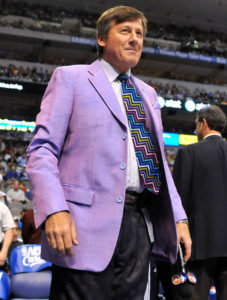 In 1981, he headed for the big time. Ted Turner called and said he was launching a new cable channel called CNN and he wanted Sager to do shows and stories on baseball and basketball. So, off went Sager, once again, to return to Atlanta.

By 1990, he was roaming the NBA sidelines as a beloved and tough reporter and interviewer and remained there until diagnosed with the life threatening leukemia in 2014. While he received a bone marrow transplant from his son, the cancer made its deadly return just a year later. He continued to work and roam the sidelines but the illness eventually took its inevitable toll.

No matter who they were, they all loved and respected Craig Sager for his courage and his professionalism. If there was an interview to be done, or a story to be had, Craig Sager was there doing whatever it took to bring that story or interview alive and, of course, in retina blinding color.