In less than two years since its formation, Level 77 Music has quickly established itself as a force within the music for screens industry. And to further advance its prominence as one of America’s fastest-growing production music companies, Level 77 Music has just acquired the renowned catalog from the Minneapolis-based advertising music house eGG Music. Tracks from the powerful and expansive eGG catalog have been featured in placements worldwide, promoting such top brands as Microsoft, Ralph Lauren, Target, Chevrolet, Motorola and many others. Patrick Avard, Owner/Founder of Level 77, made the announcement. 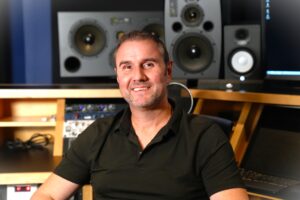 Regarding the news, Avard said, “We burst onto the scene in 2021 – we came out of nowhere – so for us as a newer company still ramping up, we felt that the acquisition of the prestigious eGG catalog would instantly elevate our profile. The music from the eGG catalog gives us immediate credibility with the advertising industry and major brands. Eric Fawcett and John Hermanson, eGG’s Co-Founders, have developed really great and durable key relationships worldwide. We love these guys and we’re thrilled that they’ve agreed to remain onboard with us at Level 77 as Creative Consultants for the next two years. We can closely collaborate with them on any projects that come along, and we can learn from their history of success in the advertising music world. Our plan is to grow, nurture and cultivate their existing catalog, which is comprised of about 2,000 tracks. By blending the eGG catalog with our Level 77 catalog, we can now offer our clients well over 9,000 tracks of truly stellar music!”

Adds Eric Fawcett, Co-Founder of eGG Music, “John and I went through a three-year process in finding the right buyer. We were looking for a company that could see future potential in our catalog. Patrick said he was interested in seeing how his company could synergize it with what he and his team were doing. The Level 77 emphasis wasn’t only on the financials, but rather on how they thought they could move the music forward. They are great guys, have a wonderful balance between passion and professionalism – they feel like our kind of people but with Southern accents! They’re just fun. These guys have been creating killer music long enough in a tough industry that can lead some people to become jaded. John and I never got jaded – we just felt it was time for us to do something different. With the Level 77 guys, there is a beautiful combination of talents – they are total pros, have lots of experience, and an endearing ‘let’s learn something new everyday’ attitude. When we made our deal with Patrick, he didn’t just say, ‘thanks for the catalog, goodbye.’ He asked us ‘will you guys stay and consult with us for a while?”  John and I knew we wanted to commit to the catalog that we built and love, so we are basically on the Level 77 team now as consultants for the next two years. It will be great fun for us to be collaborating on the eGG catalog once again.”

Regarding today’s news, Firstenberg said, “Part of what makes Level 77 distinctive from other production music catalogs is their focus on growth and expansion through acquisition. Level 77 is embracing this new model as well as actively on the lookout for new collaborators – this is evidenced by the continuing support that Eric and John from eGG will be providing to Patrick and Level 77.”

“We have an incredibly talented team and can create any kind of custom music for any project. We aren’t even two years old yet, and we’re already standing out as a ‘different’ kind of music house with a proven new way of doing things. We’re producing original music that’s new, hip and contemporary. We’re also proud of the fact that we’re making an instant impact within the industry as evidenced by us winning a Mark Award after just a year and a half in business!” Avard concludes.

eGG Music was launched in Minneapolis, MN, in 2011, by Executive Producer Eric Fawcett and Creative Director John Hermanson as an original music production company that serviced major brands across the country. The men also acted as music supervisors to select brands, including DoubleTree Hotels and Sam Adams, who wanted to use more famous music. Additionally, Fawcett and Hermanson ran a special unit called The Incubator, taking on numerous passion projects, including providing music for “Motion Poems” (which paired published poets with filmmakers,) and a huge special venue presentation called “The Light Garden” for Target and the city of Minneapolis, that paired exterior lights and stereo sound with the blue rail Metro line.

Fawcett is an award-winning drummer known for his work with Pharrell Williams and other top artists. He’s also a record producer and mix engineer, writer and speaker on matters of creativity and collaboration. Hermanson is an acclaimed songwriter who has independently sold over 250,000 records across several genres. His popular duo Storyhill has released 12 studio albums and headlines a thriving annual acoustic music festival.

Fawcett and Hermanson created eGG in order to pour everything they know about how music moves people, and to channel the decades of trusted music industry relationships they’ve nurtured, into work for film, television, advertising, and all kinds of crazy media. According to Fawcett and Hermanson, not only do these industries and new art-forms support songwriters and musicians in ways the record business no longer can, they are also supporting some of the “wickedest creativity on the planet.”

In less than two years since its launch (in April 2021), the Atlanta, GA-based Level 77 Music has quickly become one of the media industry’s preeminent production music libraries, anywhere, already winning a prestigious “Mark Award” for Pop Track of the Year from the Production Music Association (PMA) in 2022.

Founder/Composer/Producer Patrick Avard and his skilled team bring a new, cutting-edge, modern approach to the world of production music by offering top executive production and sync licensing services and original scoring talents to their major entertainment industry clients. Avard spearheads a full-time staff of 10 and a roster of over gifted 100 composers based around the globe.

Avard’s music has been featured on such high-profile TV properties as Netflix’s Cheer, NBC’s America’s Got Talent and the nationally syndicated The Ellen DeGeneres Show. Level 77’s music has also been featured in numerous television projects for Fox Sports, Hulu, ESPN, ABC and many other prominent entertainment media channels.