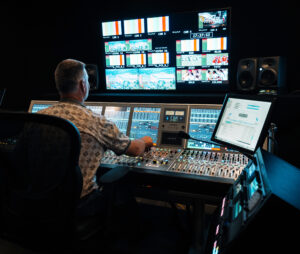 The Calrec equipment is used across a variety of live and pre-recorded sports and entertainment shows as well as giving students one-on-one broadcast audio training on industry standard technology. Students receive hands-on experience on Calrec consoles and the opportunity to operate as an A1 on certain productions. Additionally, academic classes can utilize the school’s Production Control Rooms during classes.

Louis James, Manager of Broadcast Operations at Liberty University, said, “Our consoles are being used to live stream various NCAA Division 1 sport competitions on ESPN+ as well as three linear FBS Football Broadcasts on other ESPN networks. We also use the studios for our weekly Emmy® Award-winning syndicated live sports talk show Flames Central, as well as for more corporate and entertainment shows. This includes Liberty University Convocation, which is hosting guests this semester such as Dr. Tony Evans, journalist Shannon Bream, and New York Times Best Selling author Jon Acuff.  There is also a music component to these shows, with a full band that can include up to eight vocalists.”

Type R for Radio was purchased as part of a new radio studio build and is being used for live radio shows and podcast recordings. The second Brio was purchased to upgrade a smaller control room, and the second Artemis replaced a Summa console, which was moved into Liberty’s mobile production unit. The school also wanted both of its main production control rooms to have the same console, making it even easier to move shows between rooms.

James added, “Based on what we experienced and learned while doing production during the Covid-19 pandemic, we purchased VP2 for our Artemis consoles so that it can handle remote shows more flexibly.”

Josh Roberts, Director of Broadcast Communications at Liberty University, said, “Calrec’s shared Hydra2 router core gives us the flexibility to adapt to whatever we are tasked with so we’re able to accomplish a lot of different projects with little lead time. Perhaps the biggest advantage of using Calrec is the ability to quickly build a show from scratch. Also, the integration with Evertz via Hydra2 to TDM allows us to have 1,024 channels going from our six Calrec consoles to our router. This provides an incredible amount of versatility.”

“We have consoles for every broadcast requirement, including radio, alongside a variety of networked and virtual products, and the work that Liberty University is doing is certainly proof of that. It’s also incredibly rewarding to see how Calrec gear is preparing university students for a future in a professional broadcast environment,” said Helen Carr, Regional Sales Manager at Calrec.