Lighting a Scene For Firelight

Coloring a scene with a paintbrush of light can bring emotions, depth, and texture to your production. Light a scene correctly, and you can establish a visual relationship with the audience. With that being said, few light sources can invoke as intimate a response as that of fire.

There is something primal about looking at fire. It can represent chaos or peace. It can nurture, and it can destroy. However, while it offers a pleasing on-screen aesthetic, it can be tricky to photograph dynamically. It is easy to get too much or too little detail when filming fire-lit scenes, but there are a few fundamental basics to help get you started.

Filming the Fire Itself 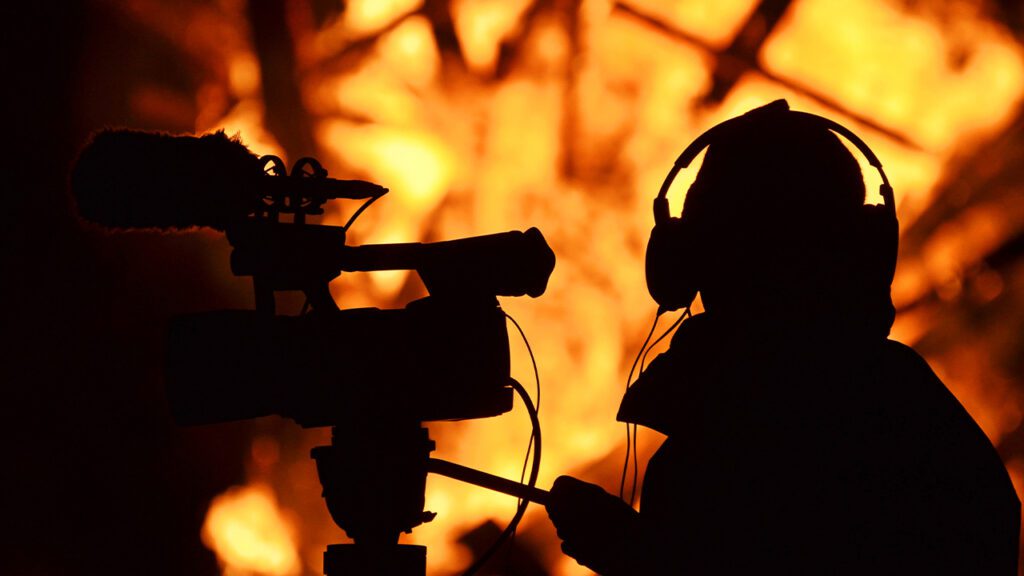 In many cases where a fire is involved in a scene, it’s the narrative’s focus, even if it’s just a mood setter. Since that is where the mood, aesthetic, or danger starts, that is where the lighting begins too.

A mistake made by many novice cinematographers—especially in an age where cinematic cameras are readily available, and anyone can be a filmmaker—is improper camera adjustments. If the focus of your shot is a fireplace, campfire, or raging inferno, then it will be your scene’s primary source of illumination. Generally, you should set up your camera’s exposure to the most intense light source and then build around that. 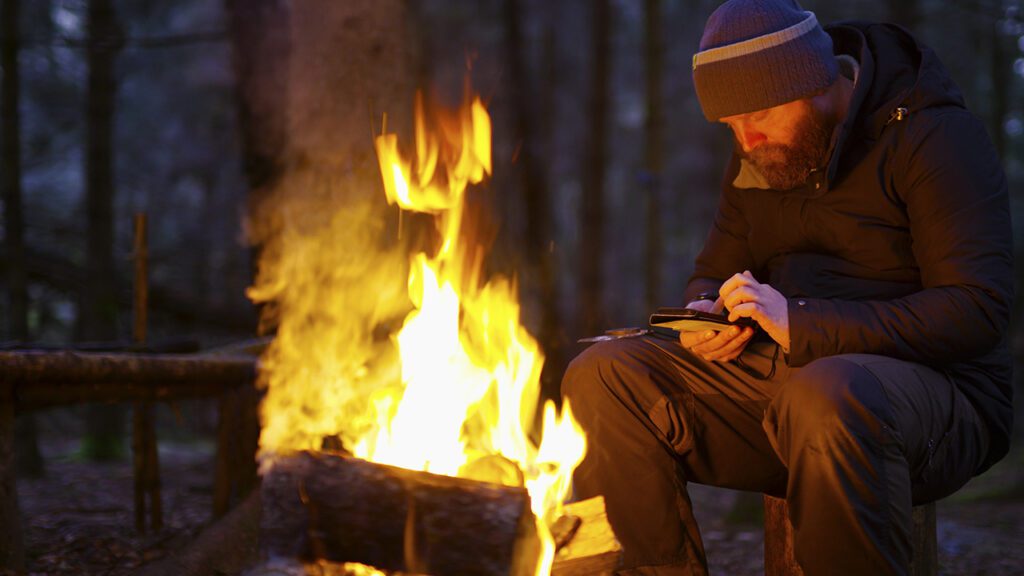 If you are filming someone sitting by a campfire, narratively speaking, that campfire will be your character’s primary, if not only, light source. However, if you try to film using that campfire as a light source alone, one of two results will likely happen. The first is the fire will dominate the shot, and everything else will be in pitch black or silhouette. The second is by adjusting the ISO to brighten the surroundings, you may see your actor, but the image will likely look washed out, full of grain, and the fire will lose all of its detail and appear as a hot white mess.

Base the camera’s exposure on the fire to capture a rich and detailed flame. Everything else will be dark, but with that as a baseline, you can begin to fill in the support lighting. It is unlikely that the camera will pick up much of the fire light spilling onto your actor, so you will need to set up a key light to help paint them into the scene. Place the light between the campfire and your camera if you want flat, more even lighting. Or place the light on the other side (with the campfire between it and the camera) if you want to open up the opportunity for more dynamic scene lighting. You will also want a light capable of a color temperature of 1,000 – 2,000 Kelvin to match the warm orange glow.

Half of the mood of fire lighting comes from the flicker and dancing shadows. Without this, the scene will have the right coloring and lighting but will feel stale without that intrinsic element. A few ways to simulate this can be achieved, all without breaking the bank.

The easiest way is to have a crew member wave boards or other objects in front of the lamp to create sporadic pauses in the light casting, though it may be passable at best and look shoddy at worst.

Other simple techniques include hooking the light up to a dimmer switch and manually turning the light intensity up and down.

Some professional LED lights may have a flame flicker function built in, or accessory “flicker dimmers” can provide this function, so a crew member doesn’t spend the entire shoot toggling a dimmer by hand. 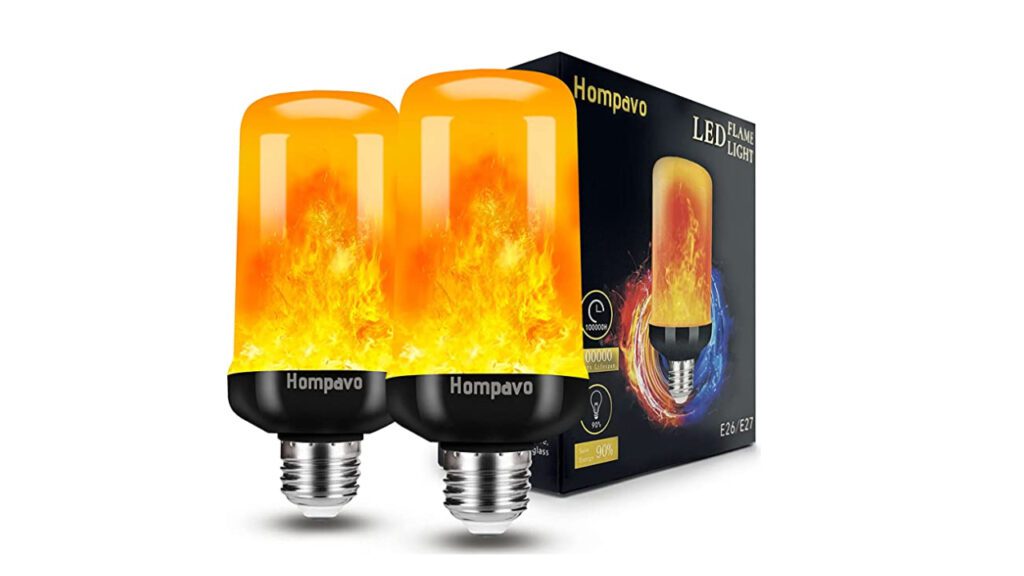 A cost-effective alternative is to purchase an LED “flame bulb.” These are readily available from a host of manufacturers on Amazon, they are cheap (typically $9 – $40 each), and they produce a surprisingly convincing fire light simulation.

Thinking outside the box, if you have access to a video projector, you can alternatively make a video signal that’s black with orange flashes or varying degrees of orange shifting and use that projector as a production light, casting the flickering light on your scene.

As a side note, be mindful of the size of the flame you’re trying to create. Small, single flames, such as candles, will have a slower, softer breathing light cast. A larger campfire will have varying temperature shifts and several flickering tendrils, creating a faster and more vibrant illumination.

Some minor adjustments to the ambient lighting could bring your scene to life.

First is realizing that not every single light has to flicker. You can provide some soft-fill lighting for the area around the fire and for some shadow softening if you prefer to see more of the scene. As long as you have other lights creating a perceivable flicker, you should be able to sell the illusion. 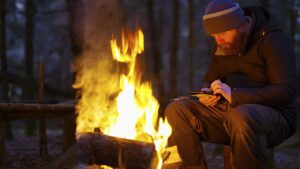 Let’s return to the campfire setup. There is an opportunity to create some interesting contrast and natural environmental highlights.

Suppose your actor is facing a campfire. Set up their key light on the opposite side of the fire than the camera is on. This will illuminate the far side of their face, creating a moody, film-noir-style shadow. Put a diffuser on the light if you want to soften this up a bit.

Having your actor lit and matching the fire is part of the battle, but the shot may still seem a little bland if all behind them is a solid black background. If you place some blue-gelled lights in the back scenery, perhaps to cast some outline against trees, bushes, or tents, it helps trace some subtle environmental detail.

Take this up a notch and add a soft blue backlight to your talent (on their shaded side). This gives some separation from the background and adds a nice blue/orange contrast that is common in cinema (they are complementary colors and pair exceptionally well visually). Experiment with different practical background lights. What color combinations can you come up with?

Simulating fire is an interesting cinematic illusion. Even if lights aren’t 100% source accurate and you artificially boost the scene, it’s about the perceived effect. If the color and flicker appear natural, it becomes much easier to sell the magic.