Modern lighting for broadcasting really got going in 1938 with the appearance of color television. One fact that many people don’t consider is that stage and movie lighting are a bit different. Proper lighting is not nearly as simple as pointing a light and turning it on. All the fancy transmitters and cameras don’t mean a thing if you can’t see the image in the first place. Lighting does two things for us: it allows us to see an image to begin with, and it can help shape or showcase that image, as well. What is being filmed, where the filming is occurring, the number of cameras being used, and the mood the director is trying to produce can all affect lighting.

The first light put into place is almost always the key light.  It’s set-up around thirty to forty-five degrees to one side of the camera and set to light up the subject being filmed at about a 45 degree angle. This is good for an average face, but other things might be getting filmed; the work of lighting has begun! A short nose or weak chin can be hidden by steeper angle; it helps trick the eye by lengthening the shadows these facial points cast. A lessened angle has the opposite effect and can help to hide the length of a proboscis as prominent as Pinocchio’s. Bring the light closer to the camera to make the subject look heavier or sturdier, move the light away to make a face appear narrower. 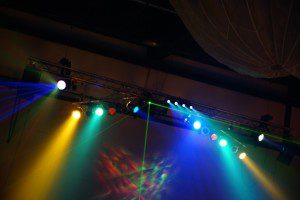 The back light is on the opposite side of the subject from the camera. It starts at the same vertical setting as the key light (a 45 degree angle from vertical). The back light can be used to make the outline of the subject sharper or duller. Bald, blonde and white-haired people can usually use less intense light. Darker-haired subjects usually require brighter lights to outline perfectly.

The fill light is the other side of the camera from the key light. It’s approximately opposite the key light and set at half the intensity of the key light on average. Usually the idea here is softer light to fill out the image of the subject. Sometimes scrim (a fine wire mess designed for this purpose) is used here to make the light less intense.

The background light subtly rounds out this sequence of lights.  The background is usually just used to help set the general mood of the shot. Scenes here are usually lit to the middle of the gray scale so they don’t detract from the center of attention. Got all that? That was super basic lighting (Lighting 101 we’ll call it)… now, let’s round out those basics with extra detail.

Movement adds new considerations to the lighting. First off, what type of movement: 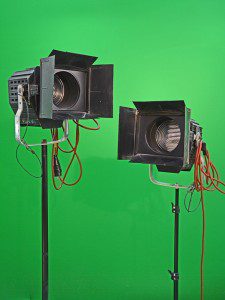 long distance or short, indoors or outdoors, straight path or more random? For a long and/or winding path of movement, the entire area to be moved through is set with soft diffuse lighting known as ‘base light;’ as the subject moves through the background, the other lights are used as necessary to give everything a flat dull appearance and minimize shadows that distract the audience from the main focus. Short or straight movement can be handled by filling the entire path with the same light. Sometimes you won’t even want to use all or some of your other lights while the subject moves from point A to point B.

When shooting outside, natural light and weather have big roles to play in the illumination of your scene. The intensity and angle of the natural overhead lighting will have a major effect on whatever image you are attempting to construct. Basic lighting techniques can still help out here, sometimes. Mad skills and/or experimentation helps you achieve the right lighting here.

Now, to help craft properly illuminated images that are not stark but, at the same time, remain crisp, spotlights can sometimes be added to help sharpen up an image. What you are recording with will also have an effect, of course.  The increasing use of digital video, for example, also necessitates softer light than previously used because of resolution often in excess of 480.  One trick that can be used to produce softer light that’s more flattering to ‘character lines’ (i.e., creases and wrinkles) in a person’s face is to bounce a spotlight off a silvered umbrella. The art of lighting is full of such tricks. 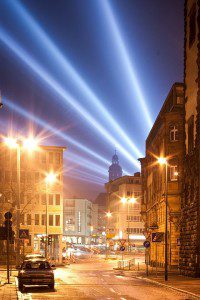 Cross lighting is a technique often used with spotlights. The beams are narrowed and intensified (“spotted down”) and aimed at opposite corners of the room creating the crossing light pattern. If you have to come up with a lighting solution quick this is a good place to start.  By taking the focus of the spotlight beam off the subject of the shot avoids shiny foreheads deeply shadowed backgrounds.  Spotlights are also good for the ‘bally-hoo’ effect – that’s the wildly rotating light beams you see at some movie premieres and other special events.

This completes our lighting 101 for the day. An expert lighting technician will use these and many other neat tricks, techniques and doohickeys in the course of their careers. The camera operator has a vital job in filming, but there’s no picture at all without light.

The 2017 NAB Show will be filled with dozens of lighting experts and companies that manufacture such lighting.  When an expert is needed, NAB Show is the place to find what you’re looking for!  Hope to see you there!