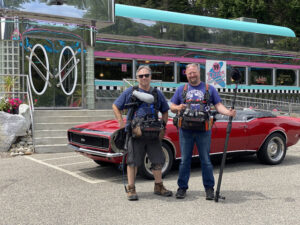 (June 1, 2022) — Bruner Dyer and Jeff Asell have the tastiest gig in location sound. They record and mix a number of productions focused upon food and cooking. That’s why the dialogue, the sizzle of the pans, and perhaps even the burbles of satisfied stomachs pass through their Lectrosonics wireless rigs. Currently, that includes two DCR822 dual-channel digital receivers, half a dozen SMQV Digital Hybrid transmitters, a pair of SMDWB wideband transmitters, and even four UCR411a receivers purchased in 2006. IFB is covered by DCHTs sending to DCHR and M2R units.

“A restaurant is not a studio or even a film set. There are so many noises that are not under our control,” explains Jeff Asell. “Doing these jobs in hostile environments, we need our gear to be pretty agile, and it cannot be delicate. It needs to be able to withstand some abuse. We take care of our gear but that doesn’t mean that the people wearing it always do!”

“We do the best we can to get everything in one take. When we are shooting, I treat it like a live show. The gear has to work,” adds Dyer. “We do not like to start over.  This is a working restaurant.  The food is cooking.  The customers are waiting, and we have to move fast.”

Asked to describe how a typical shoot is set up, Asell says, “When we come into a town, we shoot with twin crews. Bruner is on one and I’m on the other. So, the frequency agility of the DCR822 means that if someone on camera goes from his set to my set wearing a body pack, we can pre-coordinate that. We don’t have to change the pack or interrupt the action at all. The same features also make it very easy for people listening on IFB to switch between Bruner’s set and mine.”

Dyer has high praise for his DCR822 as well. The 822 is really the receiver I have been waiting for. It has the robust front end like the UCR411 that I count on, but in a modern dual-channel format. I love it.  Another feature I like is the record feature. I use it as a backup for a number of reasons.  It has saved my butt before!”

Both audio pros point to Lectrosonics’ often-touted reliability as not merely a pleasant perk of owning their gear, but a career-saving necessity. Asked if he considered the brand expensive, Asell quipped, “You know what’s expensive? An entire TV crew waiting around because you’re trying to get your gear to work the way it says it does. That doesn’t just cost money and hurt the production — it hurts your soul!”

“I don’t have time for equipment I can’t rely on,” concludes Dyer. “Point being, with Lectrosonics, that just doesn’t happen.”

Read the full interview on the Lectrosonics website here.