Loudness regulations were introduced to the world with noble intentions. Viewers were tired of reaching for the remote to adjust the volume every time a commercial advertisement blew their socks off in the middle of an otherwise consistent-sounding program.

Many agreed that measuring, correcting for, and adhering to loudness compliance was the right thing to do. The resulting regulations included the Commercial Advertisement Loudness Mitigation (C.A.L.M.) act in the USA, and loudness standards such as ATSC A/85 in the USA and EBU R128 in Europe.

However, advertisers inevitably continued to demand attention. They sought out novel ways to keep viewers from tuning out or turning down during their revenue-generating message. So, like any loyal professional wanting to keep the client happy, some mixers found a way to “game the system”.

Since then, it’s been a bit like an arms race, as professionals have gotten smarter about the science behind the loudness calculation.

Here’s an example. If we’re mixing a commercial, and all we care about is the Integrated level (average program level), we can perfectly game the system.

First, we’ll hit the audience right up front with a super loud, attention-grabbing burst. After that initial burst, we drop to a quieter volume. This makes the overall Integrated level fall over time. By the end of the piece, even if it’s a short program of only 30 seconds, we’ll have effectively “passed the loudness test” (even if it does make us feel a bit naughty inside).

Medicine commercials are perfect for this. By the end, when they are rattling off all the potential life-threatening side effects, they want the volume to be really low!

This can be why some commercials are still perceived as louder than others. It’s one of the failings of loudness standards as 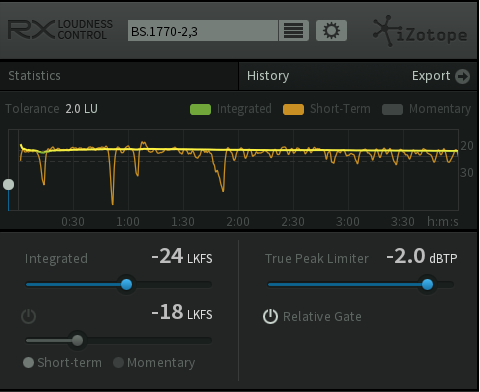 they currently exist in the USA. The current C.A.L.M. act calls for broadcasters to simply comply with the ATSC A/85 standard. This standard and others allow someone to claim compliance while still delivering a flagrant sonic shockwave up front that formed the basis of the loudness problem in the first place.

If we want to make real progress going forward, this will need to be addressed in the standards that don’t account for it. After all, the original goal is rooted in the desire for a better, more consistent viewing experience for our audiences.

Future-proofing standards for the Loudness Wars

This update to the standard means that a mix will get rejected if a mixer inserts a huge attention-grabbing burst of volume that goes above either the Short-term or Momentary threshold.

In the USA, the push for Short-term and Momentary monitoring hasn’t officially made its way into any specs. However, some networks are beginning to ask for it and some mixers are just doing it anyway. It’s also much harder to achieve s1 compliance because the Integrated calculation affects the Short-term value and so on. An adjustment for one type of measurement can affect the other. 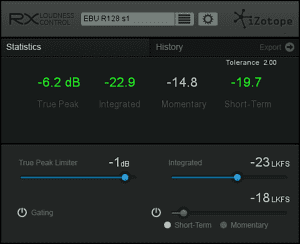 Because of this, products that help content creators monitor all of these parameters and bring mixes into compliance are more important than ever. Mixers require tools that automatically conform to different loudness standards—and do so transparently. This is particularly necessary for programs delivered to multiple standards for different broadcast territories with different standards.

One of the problems with Short-term correction is that it’s an absolute threshold (-18 LUFS, and in some specific specs occasionally -20 or -21 LUFS), which is quite low. When audio levels push the Short-term threshold hard, the resulting output can sound extremely crushed. A loudness control system must be specifically designed to spot these problems and correct them faster than real time while still allowing the mix to be as dynamic and transparent-sounding as possible.

As an example, iZotope’s RX Loudness Control supports EBU R128 s1 and it includes a Short-term compressor. An intelligent DSP built specifically for loudness analysis looks at all loudness parameters to ensure program material passes Integrated, Short-term or Momentary, and True Peak compliance without crushing the dynamics in an audible way.

Attracting and holding the viewer’s attention will always be a key focus for content creators. But let’s do that artistically. While “gaming the system” may be part of the service for some, I believe that delivering the most accurate and best-sounding audio, without sonically assaulting the listener, will always be the best path forward.