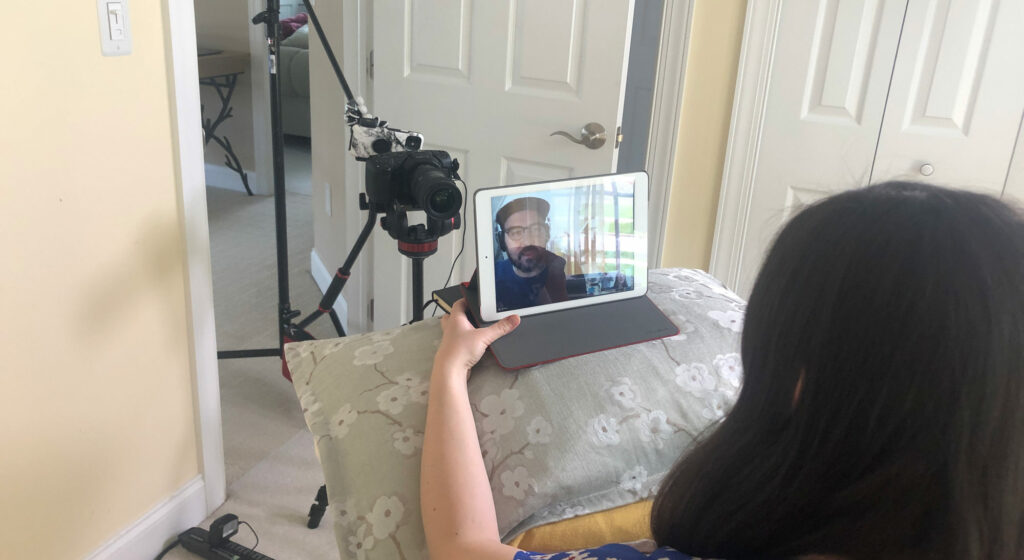 Sandwich, an LA based commercial production agency with global clients such as Etsy, American Express and Lyft, has worked with international collaboration hub provider Slack since 2014. Nearly six years after their first spot done for Slack, Sandwich decided to once again show how Slack was helping people create and stay connected remotely.

With Sandwich staff working from their homes, some in different states, the main challenge was how to shoot a live action commercial that met their high quality standards. The answer was to create a mobile production kit based around the Pocket Cinema Camera 6K shooting in Blackmagic RAW, which was sent along with a lens, lighting and audio gear. This kit was sent to Sandwich employees that would be participating and having them shoot their parts themselves. This kit, combined with training and post production done by Sandwich, became the Lunchbox service.

“It’s not easy to produce new live action work these days that’s full of authentic characters, on message and on brand, without sacrificing quality or relying on stock clips. But we’ve built new methods for doing just that, tastefully, repeatably and safely,” said Adam Lisagor, founder of Sandwich. “What makes this possible is the firepower that the Pocket Cinema Camera 6K brings us, along with how easy it is to learn and shoot with.”

The new Slack spot is a meta piece of creative that shows how dependent Sandwich had become on Slack, especially when it comes to running their business under lockdown. For the spot, seven members from different areas within Sandwich were shot in their homes using and talking about how important Slack was to maintaining creativity and productivity. A quick “how to use” the camera video was shot by Sandwich’s Lowell Meyer, the spot’s director of photography.

“Asking people who usually do not sit in front of or behind the camera to become production people is a lot to ask. You want to give them agency, but you also do not want to bog them down,” Meyer said. “The Pocket was so user friendly that everyone was able to pick it up and learn quickly. And even if what was shot was not perfect, the camera’s high dynamic range and shooting in Blackmagic RAW gave us a lot of data to fix any issues in post easily.”

For the spot, which is being shown on Slack’s site and social media channels, footage was shot by each member using Slack and Zoom, showing how they continued to create as a group from home. Each shot was then sent to Sandwich’s post production team, who edited the Blackmagic RAW footage, which was then sent into DaVinci Resolve Studio for grading and finishing.

“We use DaVinci Resolve daily with most of our commercial work, and know how powerful it is. Every shot went through Resolve, and because we were using Blackmagic RAW we were getting an incredible amount of data. Resolve works incredibly fast and efficiently with Blackmagic RAW files,” said Zach Hobesh, Head of Post, Sandwich.

Sandwich has a long history of being one of the most creative agencies in the advertising space in terms of using new technology to improve commercial productions. The creation of the Lunchbox service is the latest example of the agency finding better uses of technology for better story telling.

“Opportunity knocks when you least expect it. Before March, most productions could have 40 or more people on set. And now it was just individuals in their home offices. So we started thinking about how to keep a creative agency working. And how to do live productions in the smallest way possible but not look like everything was shot on a phone. Through using Pocket Cinema Camera 6K, we found a silver lining and created Lunchbox,” Hobesh continued.

“After wrapping the new Slack project, we realized that we could replicate the process into a service. There will always be the need for big on site productions, but there is also now a the ability, using remote productions, to create high quality, entertaining commercials that people actually want to watch. It can be done efficiently and economically, and the Blackmagic Design camera and software are a big part of that,” he finished.

To view the Slack spot and see a behind the scenes video, please go to www.sandwich.co/lunchbox.

Product photos of Pocket Cinema Camera 6K, DaVinci Resolve, as well as all other Blackmagic Design products, are available at www.blackmagicdesign.com/media/images.