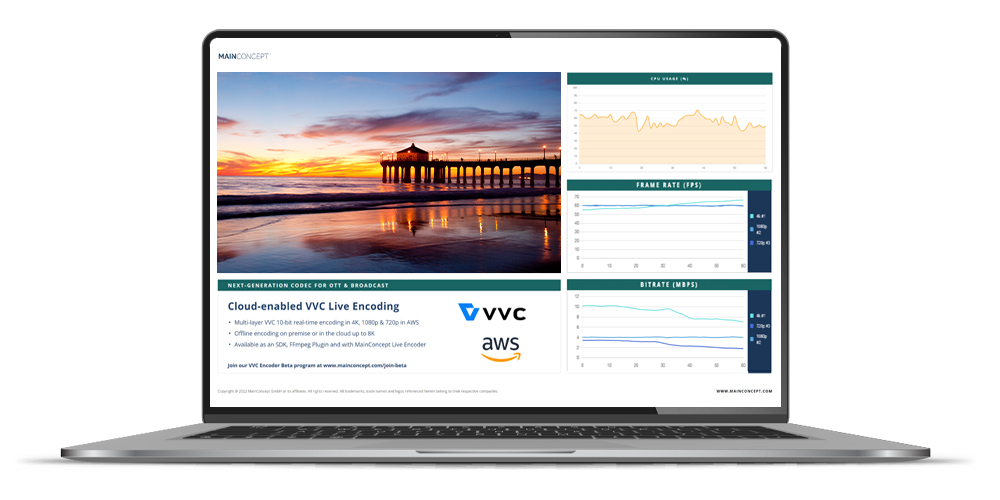 MainConcept, the leading provider of codecs for production, broadcast and streaming technologies, today announced the launch of their VVC/H.266 SDK, which will be demonstrated at the upcoming 2022 IBC Show and will be made available as a part of the company’s Beta program. Predicted by many to be the next major professional video codec for the professional media market, VVC promises to provide unsurpassed quality and efficiency making resolution jumps like the one to 8K more palatable to content distributors. In Hall 7, Booth D12 of the RAI, the MainConcept team will share exciting technology demos and highlight their advancements in the development of VVC along with 8K-optimized cloud encoding built on top of their award-winning HEVC/H.265 SDK and other MainConcept technologies that are essential ingredients used to process over 90% of today’s professional videos.

“We look forward to returning to the IBC Show in Amsterdam and to sharing the numerous advancements we’ve made, keeping ahead of the rapid growth of digital video and audio,” said Deacon Johnson, Senior Vice President, Technology Licensing & Strategy, MainConcept. “Our partner ecosystem and codec library have expanded tremendously since we were at IBC in 2019. This is reflected in our optimized ARM architecture compatibility, a broad portfolio of professional FFmpeg plugins, and high-performance HEVC products to support cloud-ready 8K, 4K and HD live encoding workflows on a single low-cost server, as well as newer offerings such as VVC.”

MainConcept is launching their new VVC/H.266 Encoder SDK, which is designed for real-time 10-bit operation. For the Beta program, the SDK will be available for broadcast trials, field testing, and TV standards development and verification. For rapid deployment and evaluation, an FFmpeg plugin will be released as well. You can apply to be part of the MainConcept Beta program today.

The MainConcept VVC/H.266 encoder is designed to support future broadcast standards like DVB and SBTVD, as well as OTT applications. MainConcept also offers a portfolio of components that work together (e.g., audio encoders and multiplexers) to complete the solution for organizations adopting the new VVC standard for broadcast and streaming in 1080p, 4K and 8K.

MainConcept also plans to showcase encoding of 8K content in real time via a remote AWS instance, complete with a dashboard for visualizing system performance, frame rate and bitrate. This demonstration will use multiple MainConcept technologies, including Live Encoder (powered by their industry-leadingHEVC/H.265 encoder), WebASM and Hybrid GPU acceleration to show how you can encode 8K, 4K and HD in a single instance. The MainConcept 8K encoder can deliver more live channels or ABR layers per system at a fraction of the cost of traditional solutions and is available for use on premises, in the cloud and in hybrid workflows.

To see for yourself the impact of MainConcept’s essential ingredients for production, broadcast and streaming products, you can also experience using their Content Creation Lab which includes compatibility for Fraunhofer, Panasonic and Sony plugins as well as VVC, HEVC and AVC software. This tool enables users to evaluate the compatibility and quality of encoded files, review the console log and command line parameters, and learn about MainConcept FFmpeg plugin usage.

You can set up a meeting with the MainConcept team, available from 9–12 September at the RAI, Hall 7, Booth D12.

Since 1993, MainConcept has provided best-of-breed video/audio codec solutions for professional video production, multimedia, broadcast, digital signage, gaming, medical and security industries. Our software development kits, transcoding applications and plugins are used across industry verticals to meet an ever-expanding list of use cases. With world-class engineering, exquisite attention to detail, and best-in-class support and professional services, we are constantly innovating to deliver the simplicity needed with the customer experience you deserve. MainConcept codecs are engineered to surpass the challenges of even the most demanding use cases and are used by organizations such as Adobe, AVID, Autodesk, Corel, Dalet, Endeavor Streaming, Grass Valley, MAGIX, Nikon, PlayBox Neo and Sony. Visit www.mainconcept.com.

All trademarks, trade names and logos referenced herein belong to their respective owners.