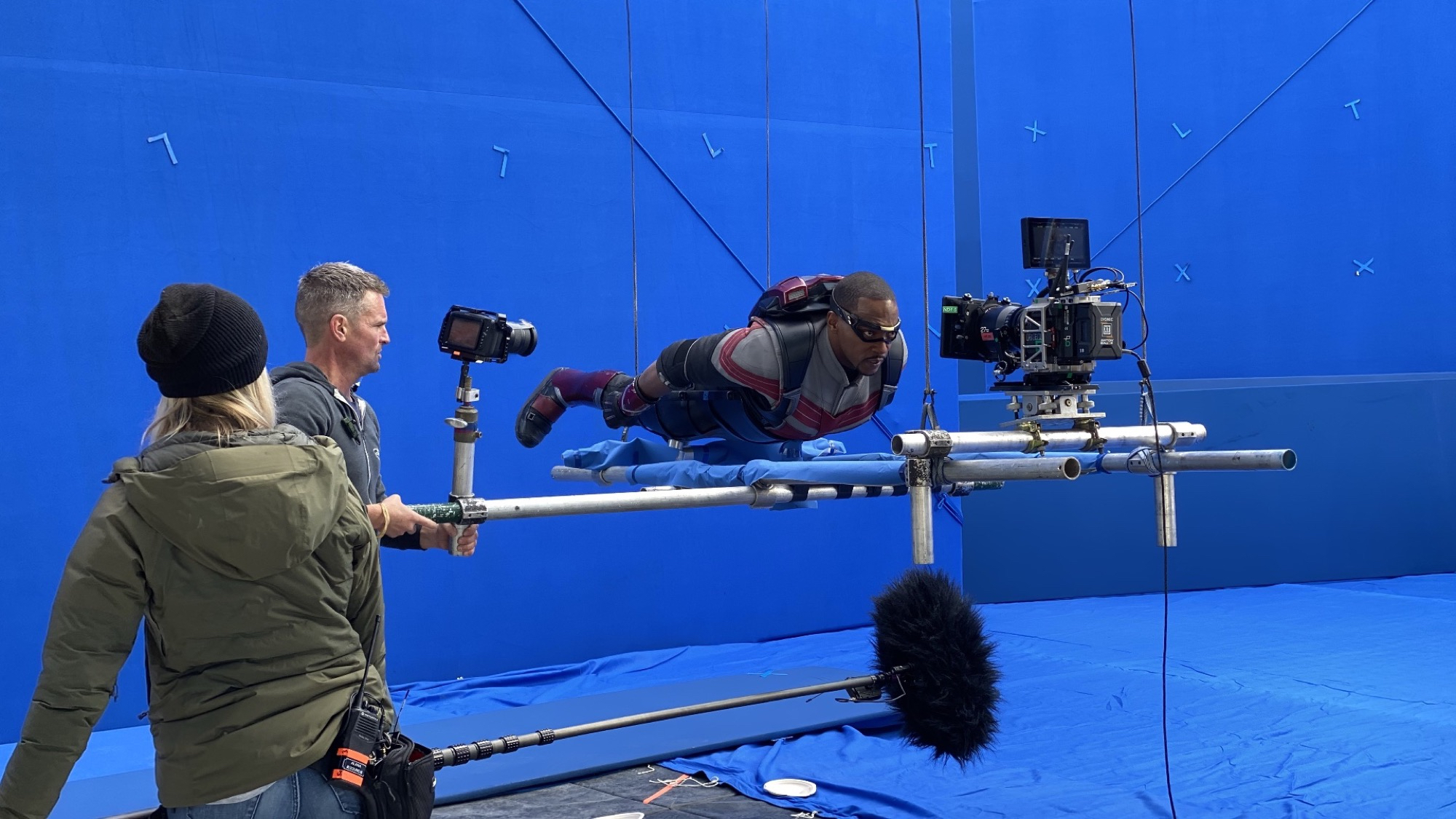 Following the events of “Avengers: Endgame,” Sam Wilson/Falcon (Anthony Mackie) and Bucky Barnes/Winter Soldier (Sebastian Stan) team up in a global adventure that tests their abilities and their patience, often with each other, as they battle the Flag Smashers, a group who believes life was better during the Blip. The series is directed by Kari Skogland.

In the first episode, Wilson takes on a formidable opponent who has hijacked a plane and taken a hostage over Tunisia. The complex sequence required Mackie’s character to battle not only helicopters and planes, but also wing suited bad guys as they try to escape. The sequence was challenging, but would set the tone for the series to come.

Visual Effects Supervisor Eric Leven worked with Skogland early to design the sequence, focusing on designing an eye catching scene without concern for methodology. “From the earliest scripts, there was always a sky battle with Falcon,” said Leven, “and we wanted to give him a chance to shine in a way that he hadn’t in previous Marvel Studios movies. Bad guys in wing suits seemed like an ideal challenge for Falcon; they gave him an opportunity to chase other people instead of just chasing aircraft. Wing suit videos were becoming more prevalent on YouTube, and Kari wanted to use that language of helmet and body mounted cameras to inform the sequence.” 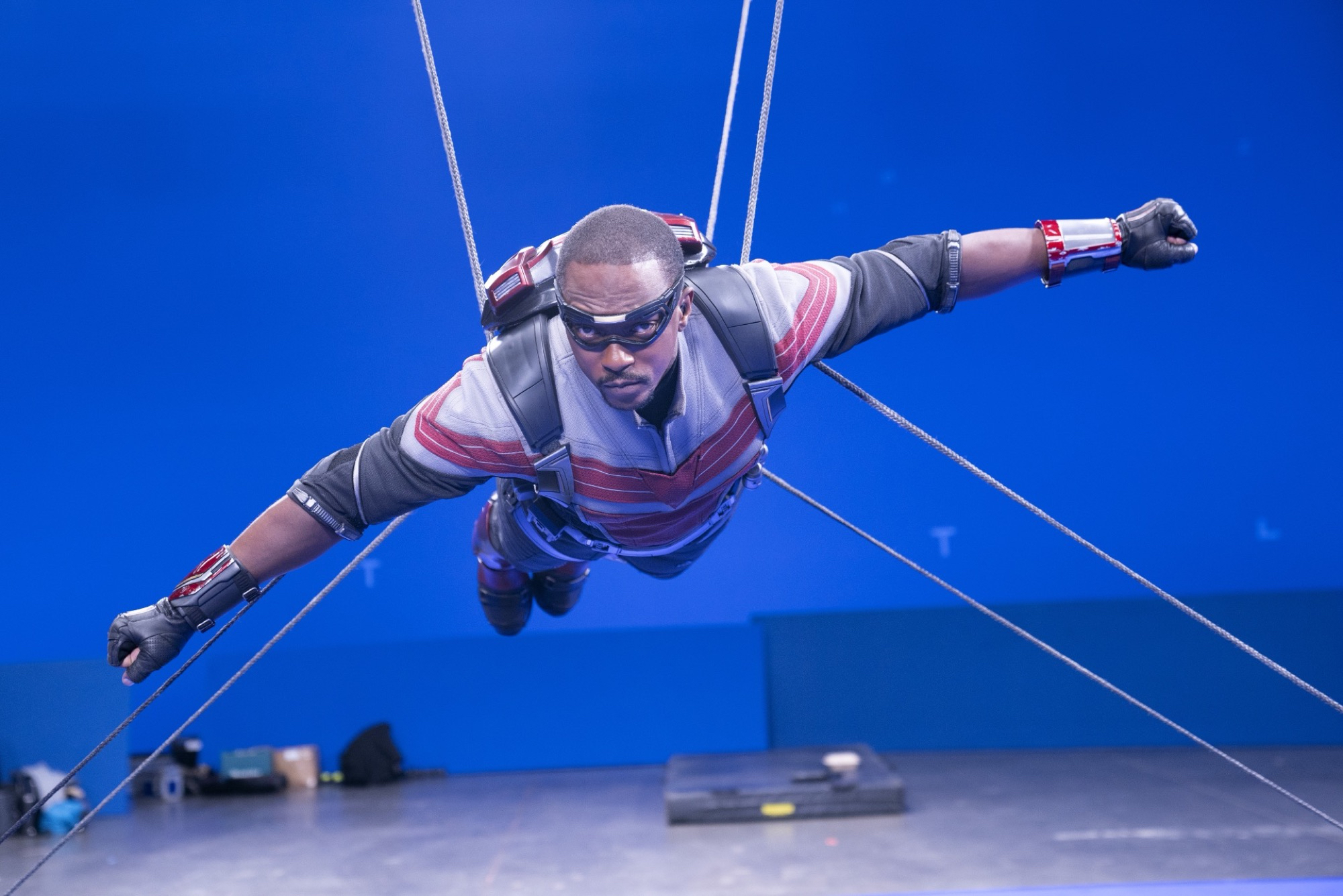 Leven’s team began working on the sequence in pre production. “We actually designed the sequence from storyboards and previz first, only later thinking about how we could actually shoot it,” added Leven. “It was nice to be creatively unburdened at the start.”

Once they had early passes of previz, Leven and Skogland showed stunt coordinator Hank Amos and cinematographer PJ Dillon. “We began talking about what could be done practically and what would be done in CG,” said Leven.

Amos was accustomed to the limitations of photography in skydiving sequences, and wanted to do as much as they could practically. “I would say that we threw the rule book away in regards to what was currently believed possible for capturing ‘air to air’ wing suit flying on camera,” said Amos. “I knew that Marvel Studios would not accept the type footage that is the usual standard for wing suit flying. But every ounce counts with wing suits. These guys are tracking at over 140 miles per hour, and if they have a piece of thread come loose from their suit, they feel it.”

Knowing that weight and size were going to be a critical factor, show cinematographer PJ Dillon began searching for a solution. “We very quickly settled on the Pocket Cinema Camera 6K,” said Dillon. Amos and Dillon then began working out the technical aspects of the shoot. The sequence on “The Falcon and The Winter Soldier” was the first time that anything bigger than a small action camera had been used for more than just a helmet mounted configuration. After a week of testing with top skydiver and aerial coordinator Travis Fienhage, Amos felt confident they could make it work.

“Kari was very keen that the sequence have an element of experiential quality to it so we wanted to get cameras onto the bodysuits and helmets, but at a much higher cinematic quality than had been done before,” said Dillon. “The Pocket Cinema Camera 6K made sense for many reasons, including the ability to use high quality, low weight stills lenses, but primarily because we could shoot in Blackmagic RAW. That gave us far greater control for subsequent VFX work and grading. We could set an exposure and be reasonably confident that nothing would clip and that we would retain sufficient detail in the shadows.”

“We tested Blackmagic RAW against LOG footage shot on our other main cameras and the two integrated really seamlessly,” added Dillon. “We were actually really blown away by the image quality of the Pocket Cinema Camera 6K sensor. It had minimal noise and a lot of room to stretch the images in the grade. This was important to us as we wanted to strip the cameras back to the bare minimum in terms of weight so we didn’t want remote iris or focus systems. The concept was to be able to set an exposure that could contain the full range of exposure, from bright sky to shadow detail, and the sensor performed really well.”

In addition to aerial photography, the sequence would incorporate blue screen footage of the actors, with Leven’s team combining the stunt work, blue screen and CG environments together seamlessly. “What most people don’t realize is that 90 percent of what they are seeing is actual wing suit flying or practical elements we shot,” said Amos. “Our visual effects teams are so good these days that it’s increasingly hard to decipher what is real, and what is fabricated with 1’s and 0’s, but I can verify that most of what people are seeing on screen is the real deal, with just the landscape and canyons added in post. When you are seeing guys ‘flip’ into the helicopters, that was made possible by a wing suit pilot wearing a chest mounted Pocket Cinema Camera 6K. When you see guys flying right up into camera, again, it’s with an underslung camera.”

On blue screen, Leven’s team was able to put the Pocket Cinema Camera 6K in places that would be impractical with full size cameras, such as mounting a camera at the end of a stunt rig to simulate a wing mounted camera on Falcon, all adding to the complexity and intricacy of the scene. “One of my favorite bits,” added Leven, “is when Falcon and a wing suit pilot are punching each other while falling through the air. In several quick cuts we see real skydivers fighting in a wide shot, real skydivers fighting in close over the shoulder, actors fighting on a blue screen and full CG digi doubles; all cut together, and it’s all seamless. You don’t know which shot was done with which method.”

Amos, with stunt coordinator credits on such blockbusters such as “Captain Marvel” and “Black Panther,” has seen his share of complex stunt work, but found himself impressed with what they could achieve on “The Falcon and The Winter Soldier,” and in particular the skydiving sequence, using the Pocket Cinema Camera 6K. “To put it quite simply, I was blown away at the performance and reliability of these cameras. We put them through the ringer and still, jump after jump we could rely on a quality and resolution that was worthy of a Marvel Studios project.”

“The Falcon and The Winter Soldier” is streaming on Disney+. 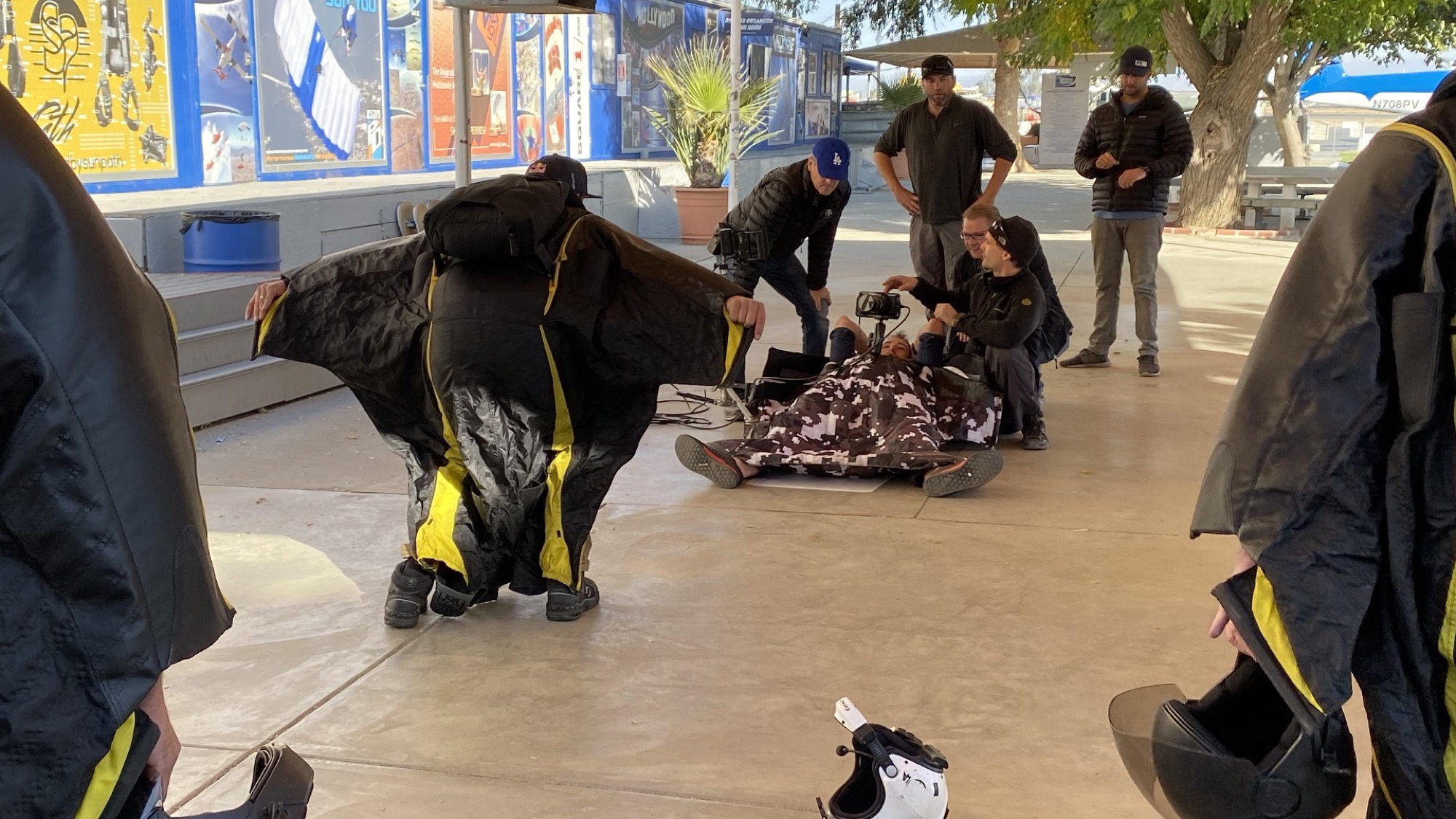 Product photos of the Pocket Cinema Camera 6K, as well as all other Blackmagic Design products, are available at www.blackmagicdesign.com/media/images.

About “The Falcon and The Winter Soldier”

Marvel Studios’ “The Falcon and The Winter Soldier” stars Anthony Mackie as Sam Wilson aka The Falcon, and Sebastian Stan as Bucky Barnes aka The Winter Soldier. The pair, who came together in the final moments of “Avengers: Endgame,” team up on a global adventure that tests their abilities—and their patience. Directed by Kari Skogland with Malcolm Spellman serving as head writer, the six-episode series also stars Wyatt Russell as John Walker, Emily VanCamp as Sharon Carter, and Daniel Brühl as Zemo. “The Falcon and The Winter Soldier” debuted on Disney+ March 19, 2021.