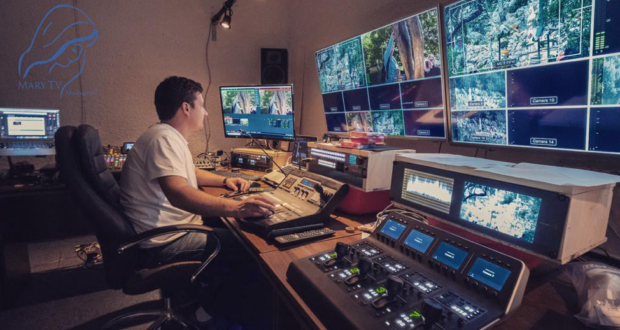 Medjugorje, Bosnia and Herzegovina – December 5, 2019 – MaryTV, a lay apostolate that produces a full-time OTT television channel broadcasting Masses, prayers, rosaries, adorations, press conferences and other events on a daily basis, has integrated Medialooks Video Transpor​t into the channel’s workflow. Medialooks is a specialist provider of ground-breaking video transport streaming solutions known for high-quality and low-latency remote production, ability to work seamlessly and reliably over the public Internet without any dedicated infrastructure, and its ability to integrate easily with SDI or NDI-based workflows.

MaryTV, established in 2010, operates a professional 400 square meters studio adjacent to the St. James Church in Medjugorje, Bosnia and Herzegovina. The 24/7 channel plays pre-recorded content 18 hours per day with the remaining airtime streamed live from Medjugorje. Programming is available on their web site, via Apple TV, iOS and Android and reaches thousands of people every day. An additional​ remote stream of a daily Rosary is led by the MaryTV founders and originates from Notre Dame, Indiana.

The channel is using Medialooks Video Transport to successfully deliver the final studio mixdown from Medjugorje to a studio in the U.S., where it is published as NDI® and automatically picked up by XPlayout—a Medialooks-based product from Axel Technolog​y. From there the stream is contributed to a​ CDN and distributed to a global audience.

“We spent about 6-months or more trying to do full HD via RTMP, sending it from Bosnia to America. It was impossible,” explained Mario Zubac, video engineer. “After struggling with other delivery methods with latency reaching 30 seconds and no reliability at all, we found Medialooks Video Transport.”

“I tested it the first time by sending video to various locations across the world and I couldn’t believe how smooth and rock solid it was. There’s nothing that compares with how the stream works and performs with SRT which has brought the latency down to 100 msec with 24/7 uptime. We first used it as a backup, but now are using it every day as our main video transport. We absolutely love it.”

Zubac says some of his favourite Medialooks Video Transport features are its compatibility; the NDI output makes streams available on any computer in the network, but support for SDI cards makes it easy to integrate into virtually any workflow; and its ability to synchronize multiple cameras in the field so that they can be mixed flawlessly in the studio.

Zubac concluded, “Everything was just ideal for our needs. It solved our problems and we don’t have to worry anymore. The fact that it’s all software and works with off-the-shelf hardware saves us money, and it automatically sends us data about packet loss which is critical to troubleshooting connectivity issues. It’s harmony that just works.”