Delivering compelling dialog while peering straight into a camera lens can be unnerving for anyone. It feels unnatural, yet it is important to avoid even the smallest shift in eye movement with the camera. Wandering eyes are very noticeable to a video audience. 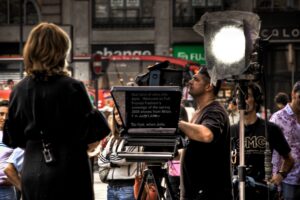 This is where a teleprompter placed in front of the camera lens can be an important tool. The job of a teleprompter is to slowly scroll through a script at reading pace. However, prompters are only useful if the script is tailored to the speech patterns and vocabulary of the presenter. Though the copy may be written by someone else, it must sound natural coming out of the mouth of the on-camera talent.

Teleprompters use a special type of glass placed in front of the camera. The talent can see the text, but the camera cannot. This allows one to a read a script while maintaining eye contact with the camera.

Using a teleprompter might appear easy at first, but reading in a professional manner can be a tricky business. It is one of those things that — when done well — comes off as effortless. Only when you try it does the difficulty become obvious.

Teleprompter users have to adapt to the flow of the words; adopt a good rhythm; take breaths at the right moments; know when to occasionally pause and — most important of all — emphasize the key points of the script. All this takes practice.

To have a successful prompter session, space and format the text in advance. Make sure the words are simple to speak — not just to read. This is an important step, since sloppy writing can easily trip up the best presenter. The best way to practice reading a script is to rehearse it out-loud. Listen to how it sounds, get an idea of the best pacing and master all of the pronunciations. 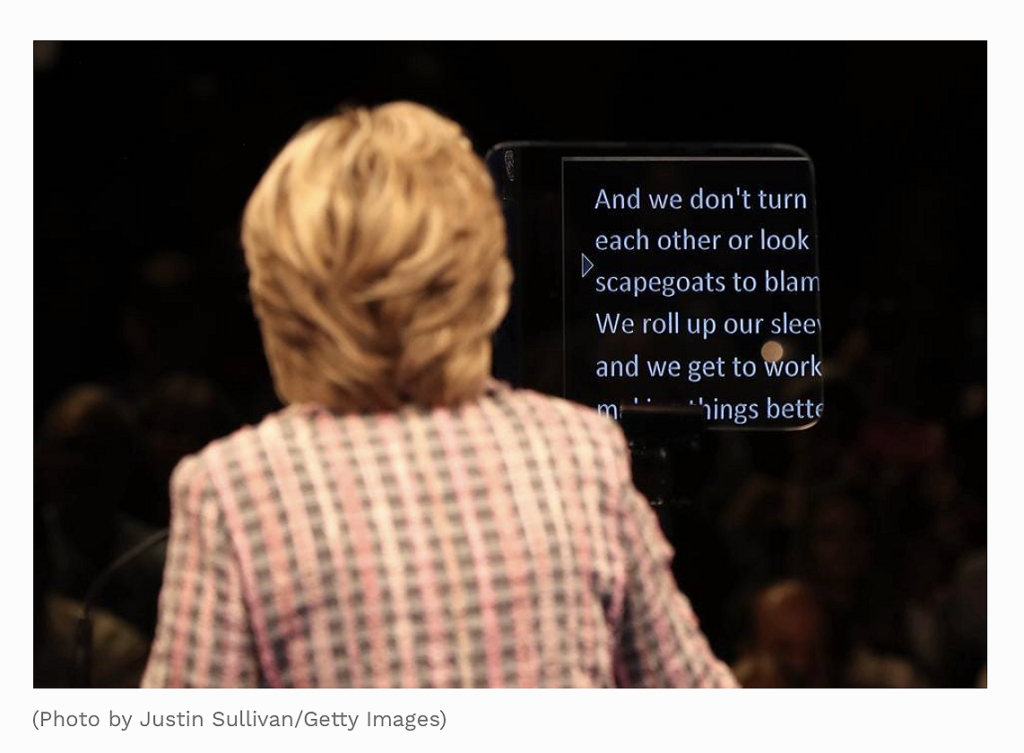 When testing a script on a teleprompter for the first time, it will sound as if it’s being read. This is normal. The presenter doesn’t need to memorize a script word-for-word, but a good familiarity with the key talking points should be in memory.

It is essential that video scripts sound natural to viewers. As the script is practiced, change the parts that don’t sound right in human speech. Then — after becoming familiar with the writing — go through it again on the prompter.

There are different types of prompters and each looks a bit different. After practice, make the necessary adjustments to the user’s preferences. Text size, font style and layout are all important factors suited to individual presenters. No one wants talent straining their eyes or wincing while on camera.

Teleprompters should not be treated as automatic devices — though at first they may appear to be. Prompters can be adjusted for comfortable reading and synchronized playback with the presenter’s voice, but that does not just happen. Through trial and error, the prompter has to be set up correctly.

Before allowing a prompter to operate on its own speed, have an operator work with the presenter to find the rhythm of the text. Yes, this means a real human operating the moving text in line with the rate of the preferred speed of the script.

Adjust the scrolling speed to suit the most natural talking pace. It is good to wait until the text has scrolled towards the top of the screen before beginning to read. This can help reduce lag and any awkward waiting for the prompter to catch up.

Practice often reveals that some scripts may need to be formatted into smaller sections. Treat the text like a music score — illustrate how it should be read on camera. Insert breaks when needed. Add bullet points if it helps. Underline words for emphasis. Mark places to take a pause and to breath. 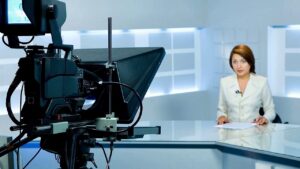 These tiny breaks can make the script smoother, more natural and less like it is being read. Some speakers prefer creating an outline of their script on a prompter, rather than reading it word-for-word. There is no right or wrong way: choose the method that makes the presenter most comfortable.

When on-camera, all presenters should maintain a high energy level. Presenters with enthusiasm connect better with audiences. Use body language, move your hands, smile, be confident, show passion and keep eye contact. Pretend you are talking directly to one person.

Some performers find using a prompter difficult on their own. In that case, it may be helpful to have the talent work with a prompter coach. Every presenter is unique and each has to find the best approach to deliver a compelling speech. Teleprompters are tools, and don’t fit all users.

Correct breathing is a key element in effective communication. Breathing is important in the interpretation of words for both the presenter and the audience. It allows for better elocution, and allows the audience to better interpret the information being conveyed.

The best presentation of a script is lively, authentic and personal. Naturalness is important. Audiences appreciate simplicity and proximity. The best presenters improvise, use humor and occasionally go off script to add humor. These contribute a more genuine quality to a script.

Though teleprompters can be useful tools in video production, they must be used correctly to be effective. Besides the actual reading of the script, eye movement and focus, body language, breathing and vocal inflection are critical. These elements are important to understand how to make the adjustments needed for a successful and dynamic on-camera appearance.