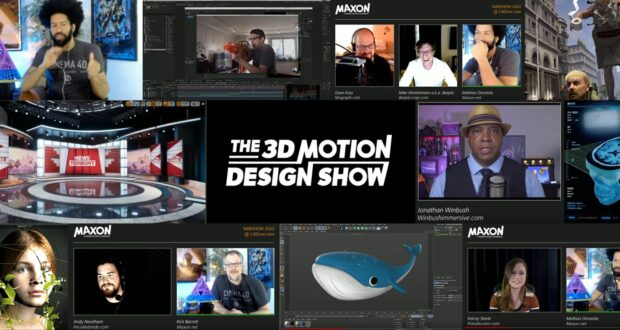 Friedrichsdorf, Germany – June 8, 2020 – Maxon, the developers of professional 3D modeling, animation, and rendering software solutions is pleased to announce its trade shows, road shows and special events for the remainder of 2020 will be free virtual events hosted on 3DMotionShow.com (formerly C4DLive.com – Maxon is rebranding their streaming events to reflect the full product line after the acquisition of Redshift and the merger with Red Giant).

Following the success of Maxon’s NAB digital experience, the company will host a robust calendar of online streaming events to coincide with the timing of Siggraph, IBC, NAB Show NY, HOW and Adobe Max — shows that are now cancelled as in-person events. Each virtual trade show or event will be modeled after Maxon’s NAB Show online event, which featured four full days of exciting presentations that streamed live the same week the major industry conference would have taken place prior to its cancellation amid the Coronavirus pandemic.

Maxon will be hosting this series of events as “The 3D and Motion Design Show.” It will feature the world’s top motion graphics and VFX artists showcasing professional 3D techniques and real-world production workflows using Cinema 4D, Redshift and the Red Giant suite of products. Presentations from each event will be streamed live and available online shortly after airing on 3DMotionShow.com as well as the Maxon YouTube channel.

“The 3D and Motion Design Show” kicks-off on June 18th, at 8:00 a.m. (PDT). Interested viewers can sign up now to receive updates and for early access on 3DMotionShow.com.

All events will be streamed live on 3DMotionShow.com (formerly C4DLive.com).