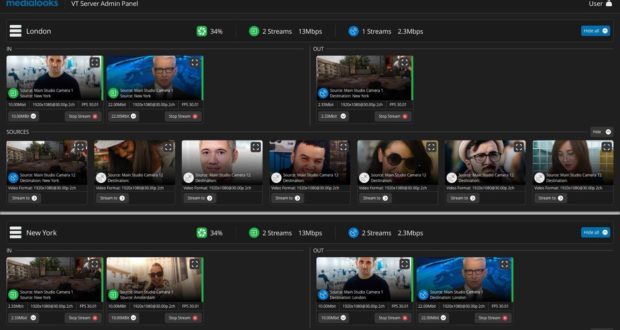 Amsterdam – October 3, 2019 – Medialooks, provider of ground-breaking video transport streaming solutions for remote production, extended the product range with its new cost-effective VT Server that was introduced to the European market at IBC 2019. VT Server allows 4K video to be transported over the public Internet to multiple destinations via a single interface with an average latency of only 100 ms. The 100% software solution runs on off-the-shelf hardware, on both CPU and GPU codecs, to provide maximum flexibility and value by eliminating the need for bespoke equipment. Visitors at IBC were the first to see demonstrations of VT Server at a major European show.

VT Server, suitable for live production and developed to target TV stations, video production companies, event venues, stadiums, houses of worship, esports studios or any organization with the need to link multiple remote sites on a regular basis, features the industry’s quickest setup with installation easily accomplished on both receiver and sender sides in three clicks. The new software-only solution allows PTZ cameras to be controlled remotely, can scale up to dozens of locations, and is all monitored and managed via a user-friendly cloud-based application.

“We’ve designed VT Server to not only withstand the demands of uninterrupted 24/7 operation, but to deliver unparalleled performance and consistent reliability under those circumstances,” says Andrey Okunev, Medialooks CEO. “VT Server can be deployed faster than any competitive solutions and can quickly scale to serve many locations with ease. The latest release features a way to integrate third-party video production teams by letting them contribute guest streams with just a browser.”

Based on SRT and WebRTC technologies, VT Server features auto-synchronization of streams during multi-camera production and delivers broadcast quality transmission with up to 4K 60p video with multichannel 512 kbps audio. Ideal for both NDI® and SDI workflows (Blackmagic Design and AJA supported), it also supports alpha channel in both modes, as well as fill and key output. VT Server is configured and operates in either Medialooks’ cloud or the customer’s own cloud.

VT Server is offered as a subscription with a predictable pricing plan that allows operators to prepare properly and remain within budget.

Added Okunev, “We were delighted to debut this new innovation to the European market at IBC, but we are also excited to keep getting better at integrating SRT and WebRTC technologies and building new capabilities—such as transporting uncompressed video.”