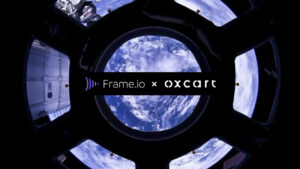 Space exploration has always evoked a sense of wonder in us and will continue to do so, as NASA looks to the future, expanding its mark in space. From the first manned Mercury flight in 1961, to the Moon landing in 1969, up until 2011’s final Space Shuttle mission – audiences watched in awe and anticipation as the unknown was explored.

When NASA, after a nine-year hiatus, announced the launch of the SpaceX Crew Dragon spacecraft from the Kennedy Space Center, they tasked creative agency collective Oxcart Assembly with creating a brand new visual identity for the NASA SpaceX launch, with the goal of getting people interested and excited about space again. With the help of video collaboration software Frame.io, the team took 60 years of NASA history and created stunning visuals and video content, capturing not only the glory of NASA’s nostalgic moments, but also bringing to light never-before-seen footage that showed how far NASA has come. Read the full story: Made in Frame: Oxcart Assembly Goes Boldly for NASA SpaceX Launch.

Oxcart Assembly principals Jeff Jetton, Tony Gardner, Greg Moore, and Adam Fitzgerald had never worked together as a group, and had only ever met in person once prior to taking on the Launch America project. Each member of the team brought an expansive resume, with heavyweight experience in different sectors of the industry. Jeff is a renowned marketing strategist known for his time at BuzzFeed and developing high-profile campaigns at R/GA. Tony is a special effects guru known for his work on Michael Jackson’s Thriller and most recently, Sacha Baron Cohen’s daring Who Is America. Greg and Adam are the co-founders of Iron and Air Media, working with household brands from Toyota to Converse.

Each one had a tie to NASA in one way or another – something they wouldn’t discover until working on the project. It’s as if all their paths would eventually lead to this moment – working together on the branding for Launch America.

Once the team started working, the world was turned upside down by the emergence of COVID-19. Never having worked together before, they had to find a way to embark on the project of a lifetime and collaborate while dispersed across the country, between New York, California and New Hampshire. The team needed a fool-proof collaboration process; Frame.io was the mission-critical piece that made it possible.

One of the biggest challenges the team faced was culling through the immense amount of archival footage they received from NASA, in order to find the perfect clips to build the narrative title sequence. As Jeff put it, “We basically had 60 days to select 60 seconds to represent 60 years of NASA history.” Due to its original formatting from decades past, the footage was difficult to sort through.

With the help of Frame.io and access to the alpha version of the new Frame.io Transfer app which enables super-fast bulk file uploads and downloads, the team successfully uploaded 252.14GB from NASA’s servers in  two hours. They were able to pull only what they needed into Adobe After Effects and sort through hundreds of hours of footage.

Frame.io enabled Oxcart Assembly to defy time and space, by allowing them to collaborate in the same way they would if they were together in person. The team could access the same content in real time and leave comments – even with the time difference, late comments would be ready for the east coast crew in the morning to keep the momentum going.

It wasn’t lost on the team the significance of this project, and the immense responsibility that they had taken when signing on. This was a project that would leave its mark on history – the stakes were higher than ever before, working alongside NASA and the U.S. government. Given the challenges and importance of the project, having the ideal set of tools was a key factor in its success.

“It feels like you could take Frame.io out anywhere in the world and connect people who were spread out, and turn around a project of this magnitude for the government in record time and with everybody’s voice being heard,” Tony said. “In a way, this feels more collaborative than anything I’ve ever done with people face to face.”

With the help of Frame.io, the Oxcart Assembly team was able to function as one team, even while in quarantine, and play a role in America’s return to human space flight.